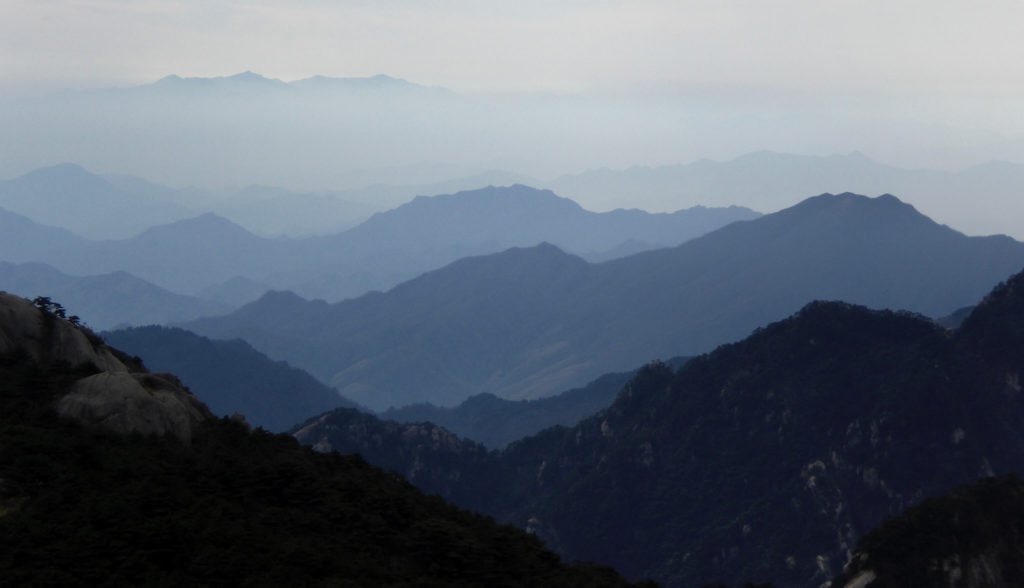 Huangshan (黃山, Yellow Mountain) isn’t one of the Five Great Mountains of China (like Huashan and Taishan), or one of the Four Sacred Mountains of Buddhism, or one of the Four Sacred Mountains of Taoism; yet it’s probably more well-known outside China than all those other mountains combined due to its having been one of the favourite subjects of Chinese painters since time immemorial. If you’ve ever been to, say, a Chinese restaurant in Manchester and seen a picture on the wall of steep cliffs rising up through a sea of clouds with pine trees clinging to their tops, it was very likely a picture of Huangshan. Doing a Huangshan hike is a good way to enjoy some of China’s prettiest scenery (though you definitely won’t have the place to yourself).

I went there during my first trip to mainland China following a Trans-Siberian journey, on my way from Yangshuo to Qingdao where I would take the ferry to Korea. The name Huangshan actually refers to an entire scenic area encompassing a number of mountain peaks (the highest being Lotus Peak, 莲花峰, Lianhuafeng, at 1,864 m), and is also the adopted name of the nearest town (also known as Tunxi, 屯溪). I arrived in Tunxi on an early morning bus from Shanghai South station (where I’d just disembarked from an overnight train from Yangshuo), and was booked on a train north to Tai’an (to climb Taishan) the following morning; so after dumping my bags in a hotel I headed straight to Huangshan knowing that I didn’t have time to climb it, but hoping to get there in time to quickly go up one of the cable cars and potter around a bit at the top & snap a few photos before heading back down. Unfortunately it was getting quite late and I didn’t get there in time, so I returned to Tunxi disappointed.

A missed train and a temper tantrum

The following morning I got up early to check out and head to the station, and hit a slight snag… those who’ve been to China will recall that when checking in to hotels and hostels you’re usually required to pay a damage deposit of 100 yuan (sometimes more), which is returned when you check out. The problem with this system is that often when you want to check out, there’s no-one at reception, or the staff at reception don’t have the keys, or they lack the authority to give you your deposit and need to call the manager, and so on. Always allow an extra ten minutes for this if you’re in China and have an early train to catch! Being a lousy morning person I’d failed to do so that day, and after waiting around for the manager to show up I had to write off my deposit and run to the station… of course, I got there just in time to see the train pulling slowly out. To say I was angry would be an understatement… although I’m usually quite good at accepting this kind of little setback and rolling with it, there’s something about travelling in China that can bring out the worst in me and I remember throwing my bag down on the floor and giving it a bit of a kicking while swearing profusely before sitting down in a huff. I knew I’d have to go and get in the monster line at the ticket window to try and change my ticket, and I knew it would be stressful; so I thought I’d better just sit there and breathe until I’d calmed down. But as I sat there attracting – and angrily ignoring! – the curious stares of the crowds in the station, the station manager came over and asked for my ticket, and took it back over to her office… she returned a short time later with a ticket for the same train the next day, re-issued free of charge. More importantly than saving me money, she saved me the hassle of lining up at a circa-2007 Chinese train station ticket office, and that’s a damn good thing as having to do so might well have pushed me over the edge. I also felt suitably chastened over my public display of rage and slipped away to the nearest hotel (directly next to the station this time – no way was I missing the train the following day!) where I had a quiet word with myself on the subject of anger management. 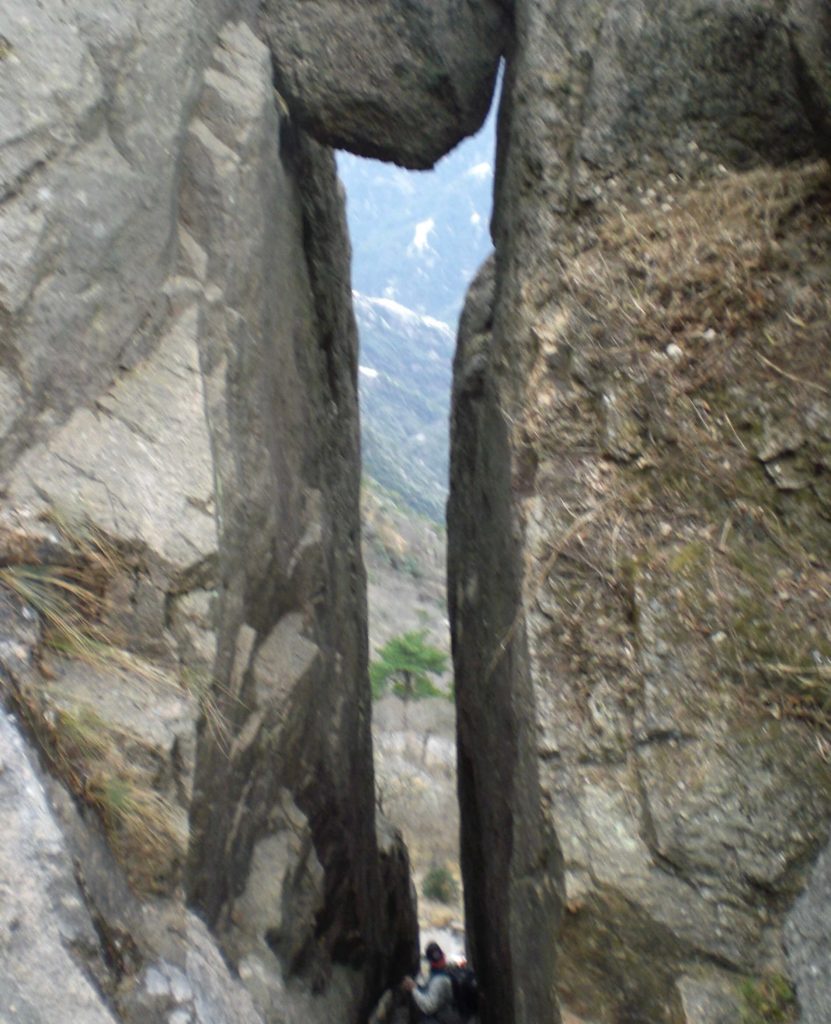 Once I’d done that and had a nice cup of tea, I realised there was of course a silver lining to being stuck in Tunxi for an unexpected 24 hours – I could get a Huangshan hike in after all. So I headed back to the mountain in plenty of time for the cable car – I would of course have preferred to hike up the mountain, but by the time I got there I wasn’t sure if I’d have enough daylight to do so and opted to take the cable car up and hike across the top before heading down on the other cable car. 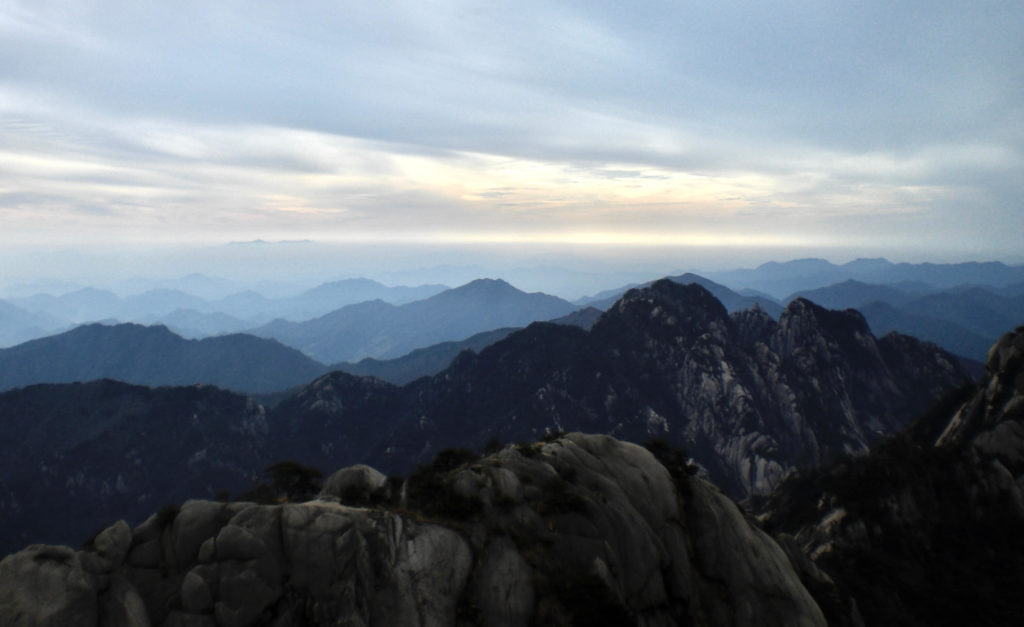 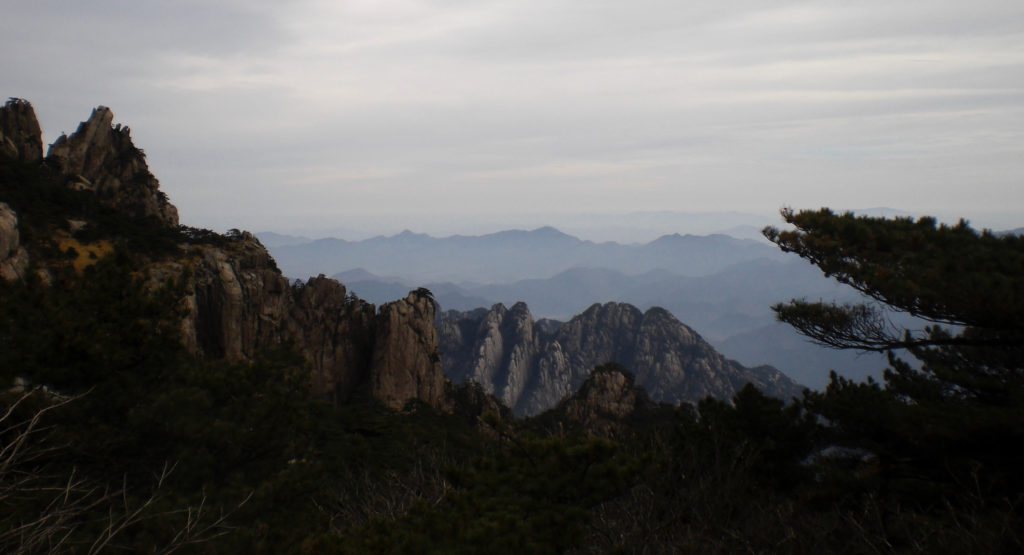 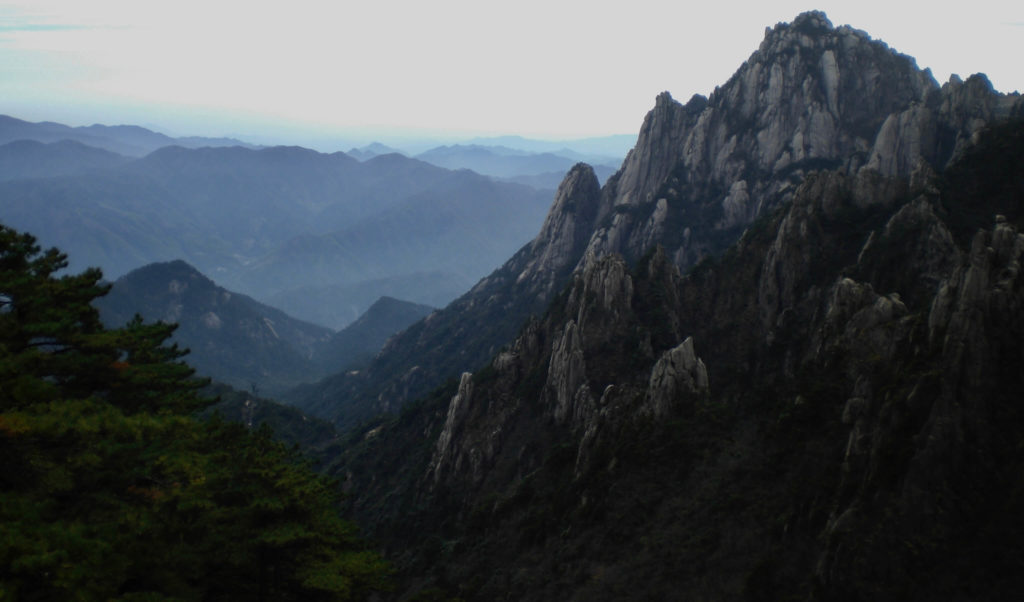 The scenery was just like all those paintings on the walls of Chinese restaurants around the world, with rolling clouds tumbling up the valleys between jagged peaks and lonely pines (with such wonderful names as Alchemist Peak, Immortal Guides the Road, Beginning-to-Believe Peak, and so on), though of course those old paintings don’t show the ridiculous number of people elbowing each other aside to take selfies! That said, it’s crowded for a reason and it’s a gorgeous place. 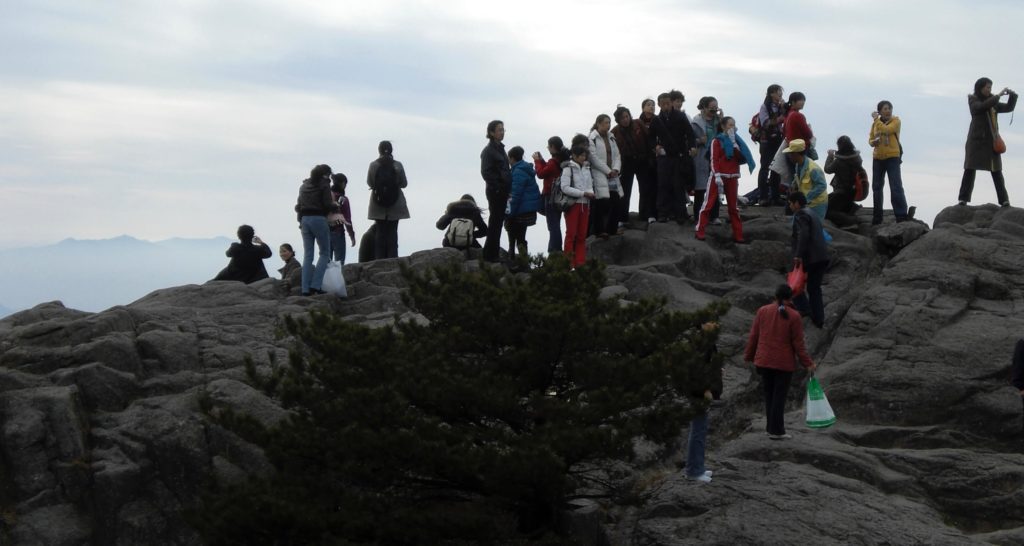 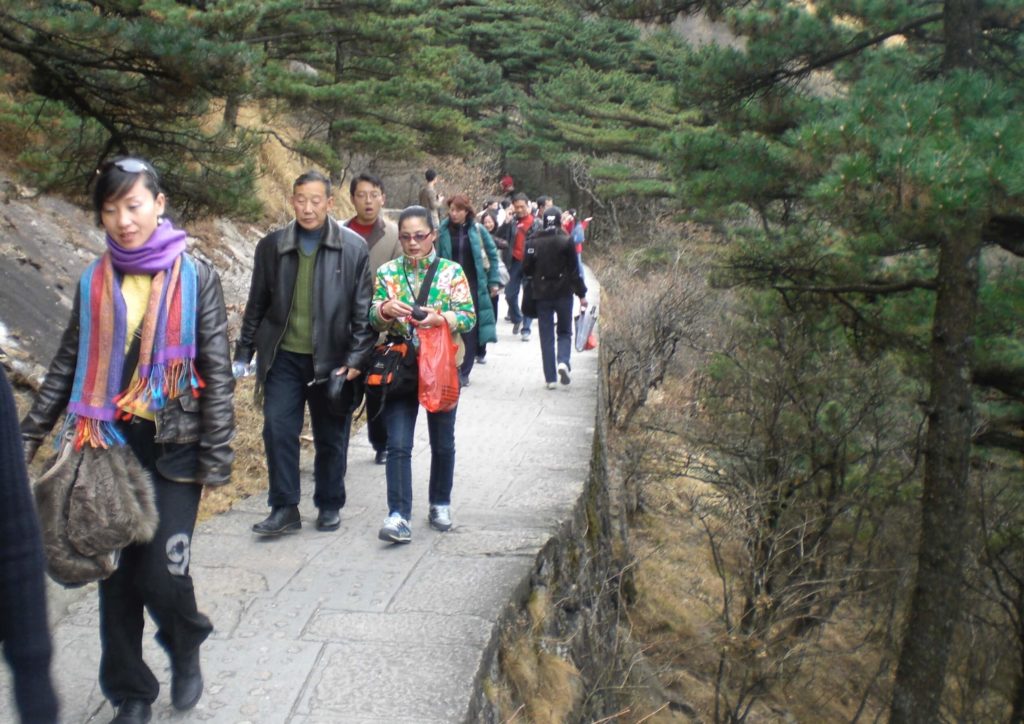 Another awesome thing was the porters! Even iron girders for buildings are carried up by muscle power: 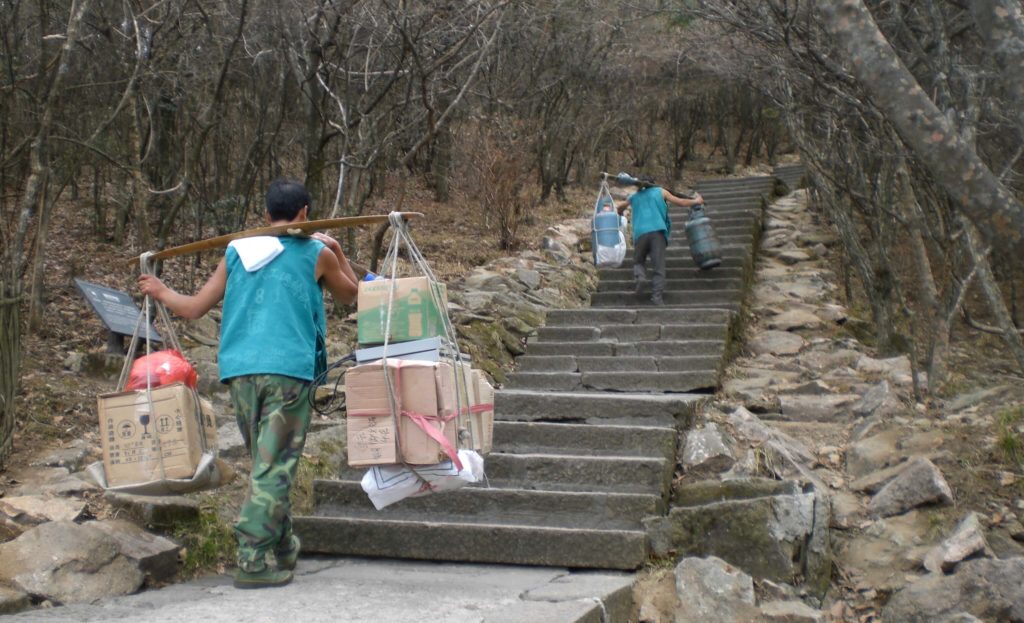 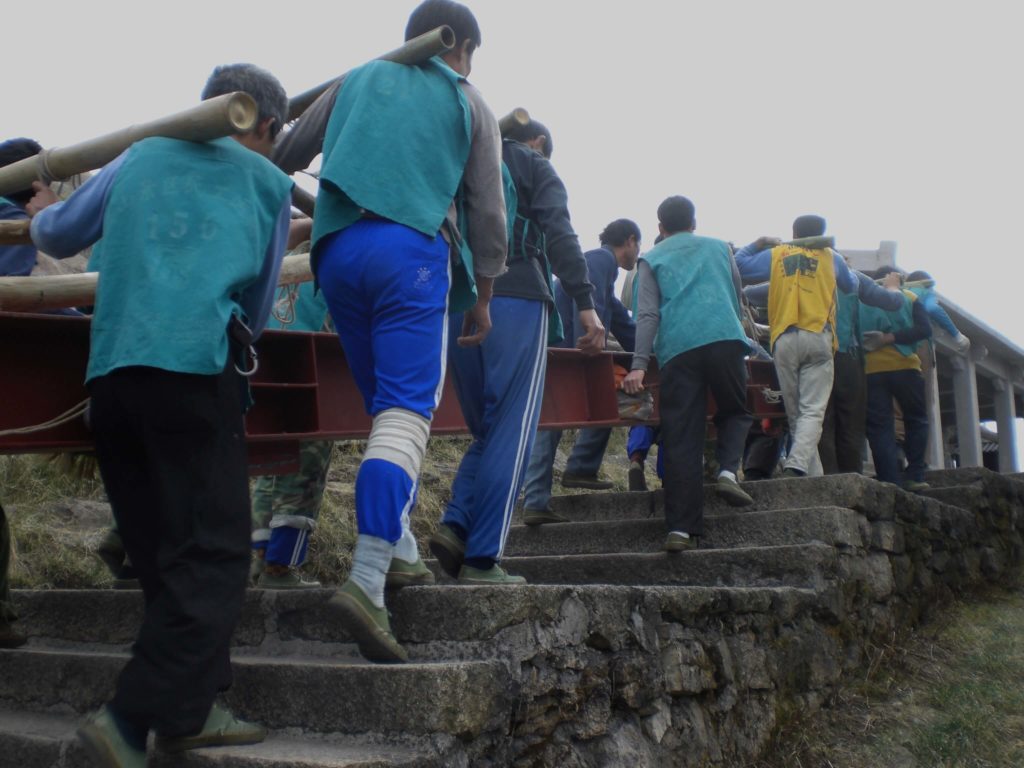 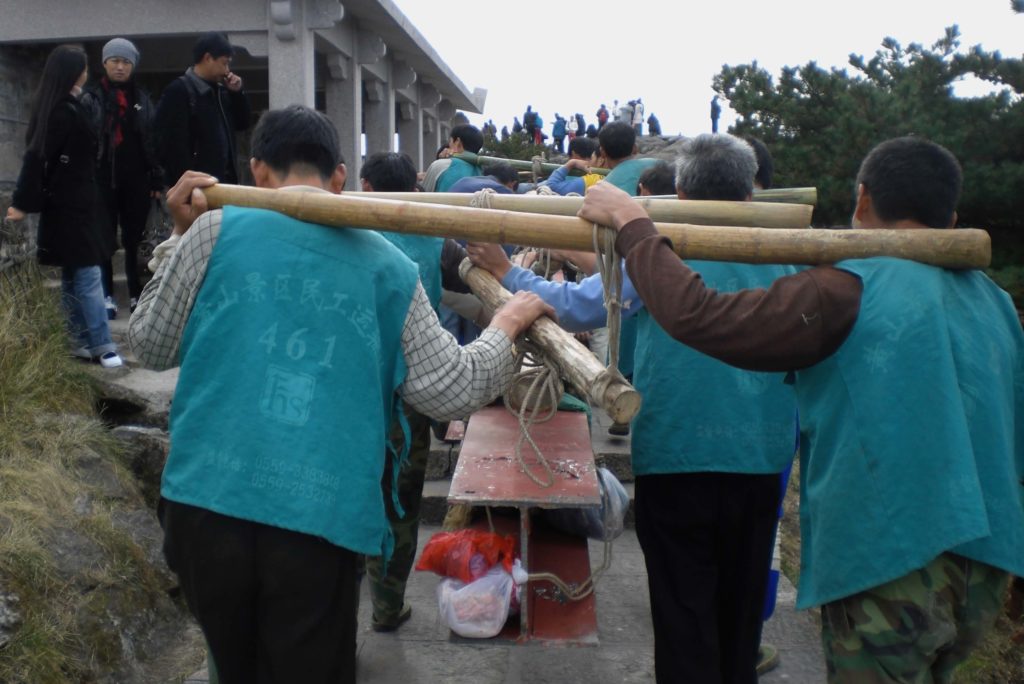 How to get to Huangshan

The cable car I ascended on was the Yungu (云谷, Cloud Valley) cable car, and I descended on the Yuping cable car from Jade Screen Peak (玉屏峰, Yupingfeng). The walk between the two upper stations only needs a couple of hours, though bear in mind that you’ll be taking lots of photos and battling the crowds, and there are lots of side trails to interestingly-named rock formations, so try to allow for at least four hours.

These two lower cable car stations are both near Tangkou Town (汤口镇, Tangkouzhen) which is at the southern entrance to the scenic area (there are shuttle buses from Tangkou to the cable cars). If you travel to Huangshan by old-school train it will arrive at Huangshan station in Tunxi, and you’ll access Huangshan through Tangkou (it’s an hour or so from Tunxi to Tangkou). This will also be the side you approach from if you take a bus from Shanghai, Hangzhou, and other points to the east and south of Huangshan, but if you take the bus you should be able to go all the way to Tangkou without changing vehicle if you wish to stay within the scenic area itself rather than Tunxi e.g. Shanghai to Tangkou is 6 hours by direct bus. There’s also a cable car on the north side of the scenic area, from a town called Taiping (太平), but for those using public transportation this is unlikely to be of any relevance.

China’s changing at an incredible pace though, and since my visit to Huangshan they’ve built another cable car on the south side called the Western Sea Valley cable car. More significantly than the new cable car, there’s also now a bullet train line (from Shanghai Hongqiao) with a stop called Huangshan North (黃山北, Huangshanbei) located between Tunxi and Tangkou. This means you can now take a 4-hour bullet train from Shanghai to Huangshanbei, and then a bus or taxi to either Tunxi or Tangkou (around 40 minutes to either).

Be careful when booking accommodation and transportation for Huangshan that you know your hotel’s specific location and also which town you’re arriving at, and what will be involved to reach your hotel.

If I were to go back to Huangshan, from Shanghai I’d either take the bullet train from Shanghai Hongqiao to Huangshanbei or the bus from Shanghai South direct to Tangkou (depending where I was starting from in Shanghai), and stay in Tangkou for at least two nights so I’d have a whole day to make an early start and climb the mountain without using the cable cars.

Whichever side you arrive from, the entrance fee is 230 yuan (2018 price) – which is steeper than the steps up the mountain! Worth it? Probably, though I do wish China didn’t charge people quite so much to enjoy its breathtaking natural wonders.

Accommodation: search & book rooms in Tunxi (the nearest city) and in the Huangshan area

Also, make sure you have a good insurance policy. World Nomads offer flexible travel insurance you can buy even if already overseas – most travel insurance companies won’t cover you if you’ve already left your country, and this can be a crucial point as I once found out the hard way in Thailand

These are affiliate links i.e. if you use them to purchase insurance, VPN service, or accommodation, 4corners7seas will receive a commission from them – this comes out of their profit margin at no extra cost to you. I’m recommending them because I know and trust them from personal use; thank you in advance should you choose to use my links.