Tokyo is generally considered to be the world’s largest city, though this depends on how you define it – large parts of the Tokyo urban conurbation are located in the neighbouring prefectures of Chiba, Saitama, and Kanagawa. Conversely, there is a large area of Tokyo prefecture itself which isn’t urban at all – this is the Tama region (named for the Tama River) in Tokyo’s far west, where the city’s sprawl runs up against the Okutama mountains (which form part of the Chichubu-Tama-Kai National Park at the intersection of Tokyo, Saitama, and Yamanashi prefectures). This allows you to get out of the city and into some pretty wild nature without even technically leaving Tokyo. The easiest way to get away from the hustle and bustle of the metropolis for a day of hiking is actually to climb Mt Takao, although that can also be very crowded – Okutama (奥多摩) is that bit further out and takes a little longer to get to, so doesn’t see the crowds; and it’s part of a large wilderness area, making it a more ‘serious’ hiking option. I’ve been hiking in Okutama twice – once as part of a hike up Mount Kumotori (Tokyo’s highest point at just over 2,000m) starting from Chichibu in Saitama and finishing at Okutama station, and once following the Okutama Mukashimichi (‘Okutama Old Road’) from Okutama station up to Lake Okutama. The traverse of Kumotori from Chichibu to Okutama is a fairly serious affair, usually done as a 2-day walk of around 32km with plenty of vertical up and down; the Okutama Mukashimichi is a much gentler option, offering a half-day hike through a beautiful area of some cultural and historical interest which is famous for its autumn colours.

I did this hike in early November in the hope of catching the red leaves in full fire mode, but it turned out I was already a little too late – the trees in Okutama change well ahead of those in the city. It can be hard to get the timing right, but if you do happen to find yourself in Tokyo a little too early to see the colours downtown you could try Okutama. Even with the trees already having shed most of their leaves, it still made for a nice day out of town. 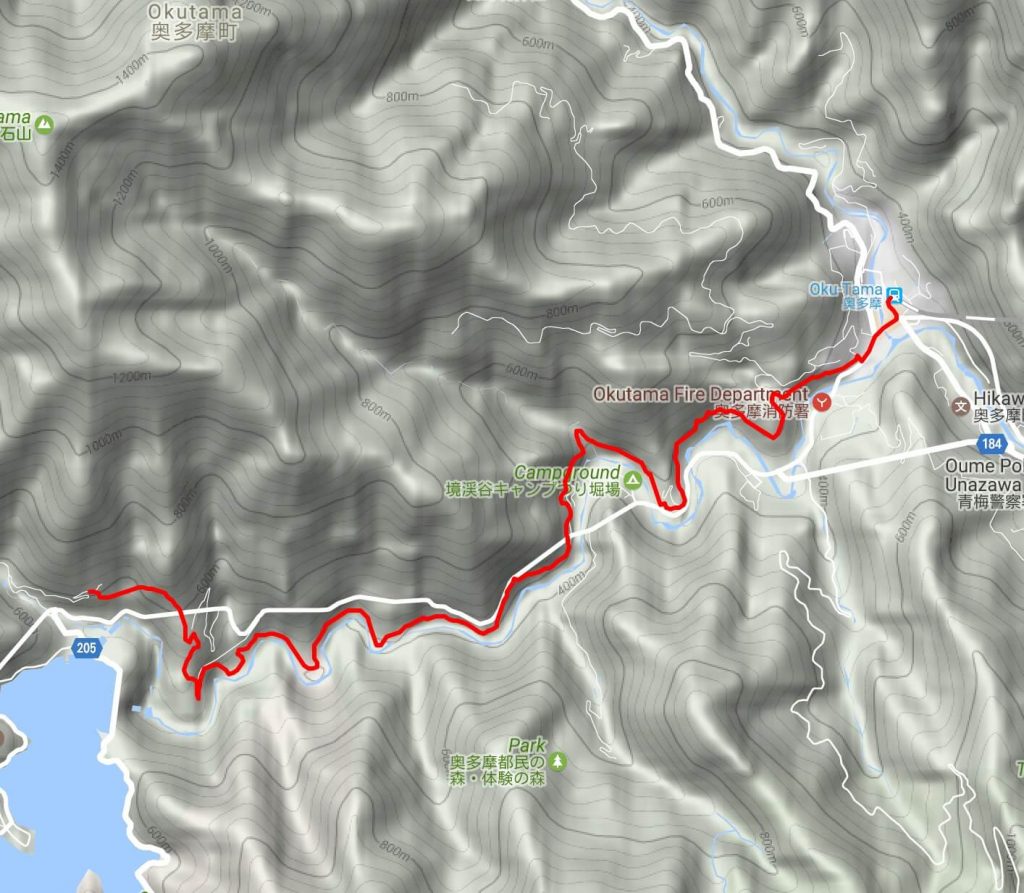 The Okutama Mukashimachi (奥多摩むかし道) – literally, ‘Okutama Old Road’ – used to be the only road in these parts, but a new road was constructed at the same time as the river was dammed to form Lake Okutama (the lake is a reservoir which provides a large chunk of Tokyo’s water supply). Once the new one opened to the public, the old road ceased to see much traffic and is mostly used today as a hiking course (though it is still open to cars and a few small communities are still located along it).

Back in the day the Okutama Mukashimichi apparently had an abundance of teahouses along the way for weary travellers, but these are now gone or abandoned. There are quite a lot of these abandoned buildings that you pass, and buildings aren’t the only abandoned things along the route – there is also an abandoned railway track which runs through tunnels and across viaducts alongside the first part of the walk, and this is one of those areas you find in rural Japan where you can really see and feel the effects of the mass migration from the countryside to the cities that took place in the 20th century, and the shrinking and ageing population of Japan in the 21st century (more on that here). Such places are both a little creepy and most fascinating, and it adds an interesting touch to the hike.

(Incidentally, checking out abandoned buildings and infrastructure is a bit of a niche pastime for some in Japan; such places are called haikyo (廃墟, literally: ruins). The mountains and forests are home to abandoned theme parks, teahouses, shrines, ski resorts, railways, all sorts; there are even dedicated websites, for example here, here, here, and a really good one here) 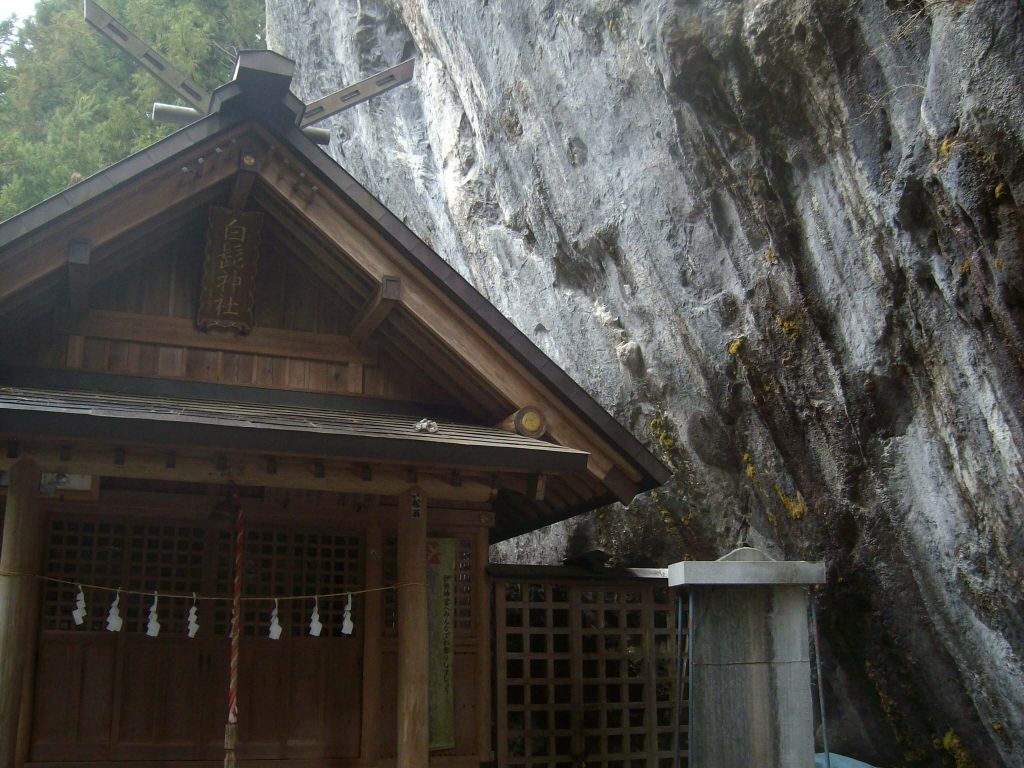 Also along the way you’ll find a shrine built under an enormous overhanging boulder and a couple of suspension bridges over the river, so there are plenty of points of interest to go with the pleasure of being in the mountains and walking through the forest. Finally, you ascend the slope next to the Oguchi dam and can enjoy the views across Lake Okutama. The hiking trail is mostly along the paved Okutama Old Road and so is very easygoing, though the section up to the lake is a narrow mountain path and much steeper and rougher. Public toilets are located at various points along the Mukashimichi, and navigation is pretty straightforward with signposts and map boards with which to orient yourself. It’s still a good idea to pick up a hiking map from the visitor centre near the station before you get started. 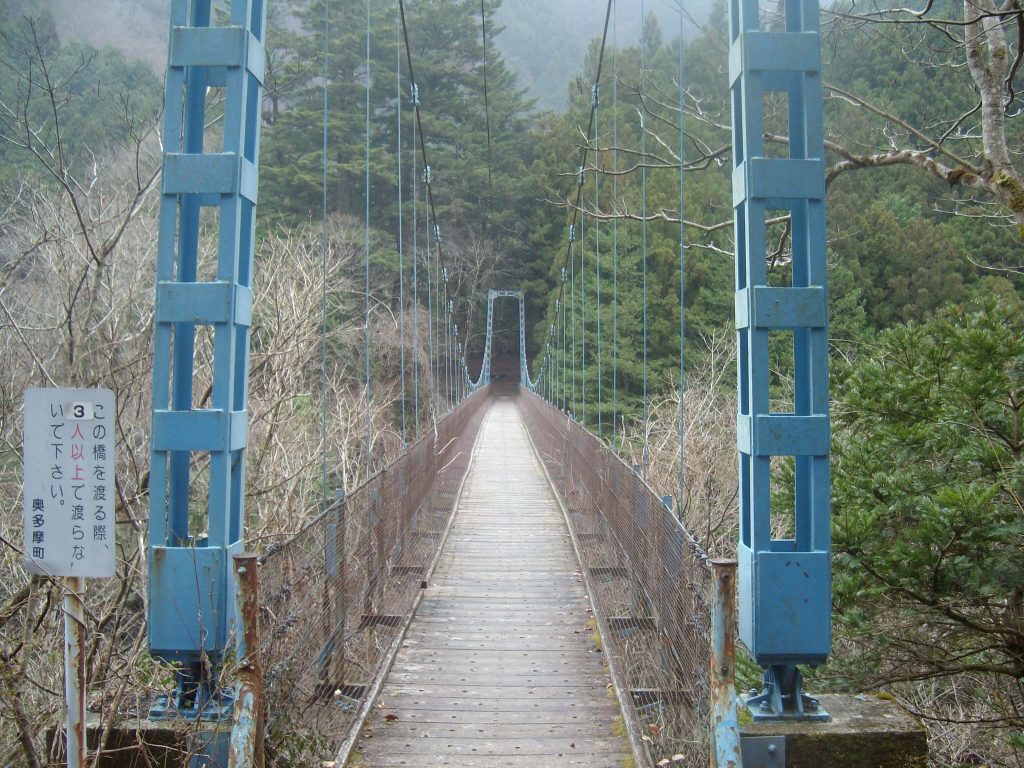 Okutama Mukashimichi is around 10km in length, and the walking time is generally given as 4 hours assuming that you’ll catch the bus back to Okutama town from the lake. In my case I walked both ways and it took maybe 5 hours in total, though I turned back at the Aome-fudosan rest station (the Lake Okutama viewpoint) rather than walking all the way to the bus stop at the end (which is about another 30 minutes on from the viewpoint).

To get here from central Tokyo, head to Okutama station (the last stop on the Ome line); take a Chuo line rapid train from Tokyo station or Shinjuku and change to the Ome (青梅) line at Ome station. As always in Japan, see Hyperdia for train details (there’s a good explanation how to use it here); it should take around two hours or a little less if you get a good connection.

Once you arrive at Okutama, turn left out of the station and pop into the tourist information centre on the left to pick up a map; then walk down to the main road and turn right over the bridge, and after five minutes you’ll come to this map on the right:

Turn right at the map and almost immediately left again at this turning: 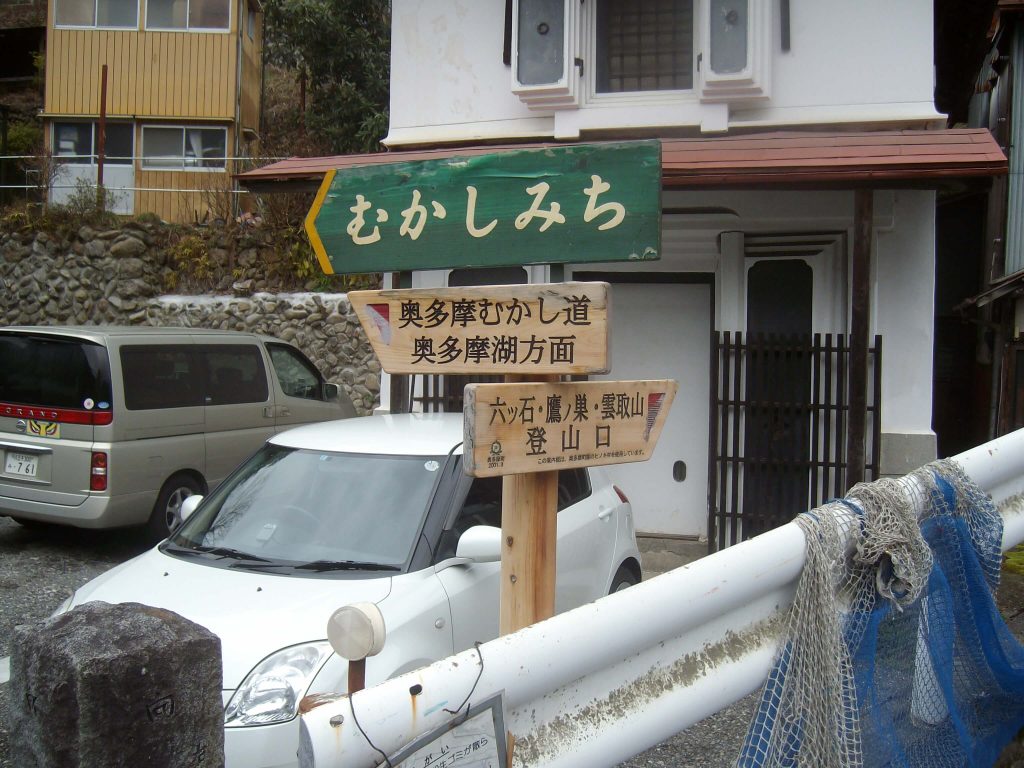 …and that’s the start of the Mukashimichi. On the signposts along the way, follow the signs for むかしみち / むかし道 (Mukashimichi) and 奥多摩湖 (Okutama-ko, Lake Okutama). There’s a hot spring in Okutama somewhere near the station; I haven’t been to it myself, but if you’re an onsen fan you can go for a soak before jumping on a train back to the city. 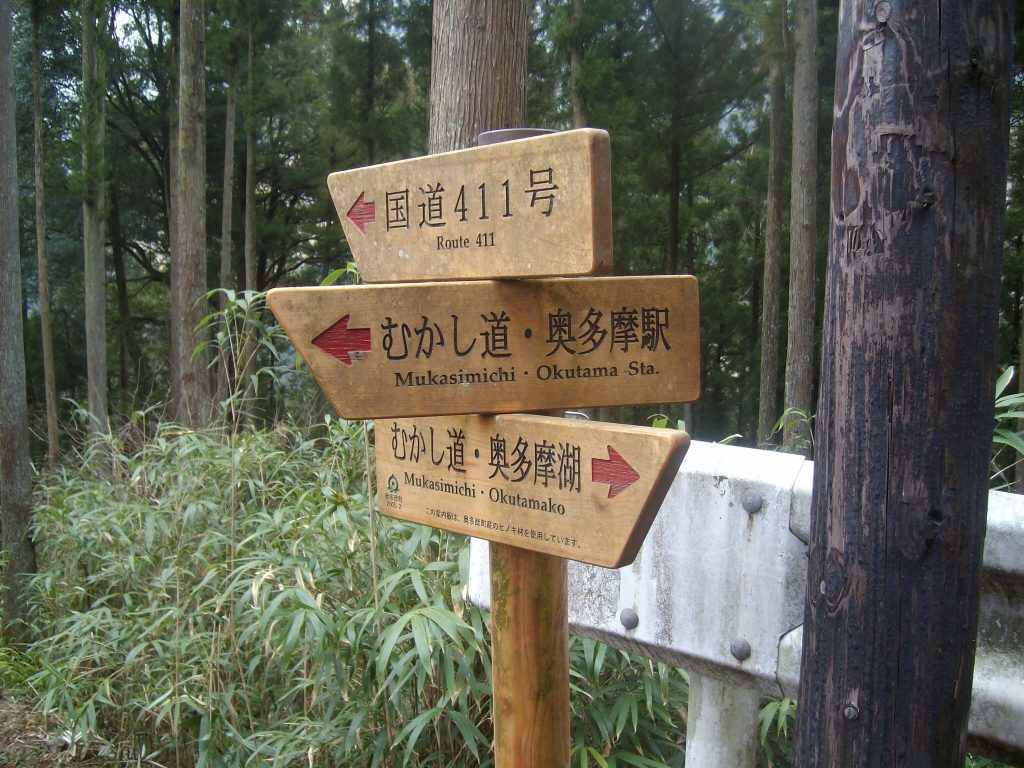 Have you hiked the Okutama Old Road? How was it? Got any questions? Leave a comment below!

Airbnb’s also a great option in Tokyo, if you’ve never used it before you can get a 30 dollar discount if you sign up with this link

For some other hikes in and around Tokyo see here, and check out my guide to hiking in Kyoto. For further Japan hiking inspiration, check out this great blog and this one (also see my pages on hiking in Taipei and hiking in Seoul)

Make sure you have a good insurance policy; World Nomads offer flexible travel insurance you can buy even if already overseas – most travel insurance companies won’t cover you if you’ve already left your country, and this can be a crucial point as I once found out the hard way in Thailand.

Check out my guide to Tokyo; for more posts on Japan, click here

These are affiliate links i.e. if you use them to purchase insurance or accommodation, 4corners7seas will receive commission from them – this comes out of their profit margin at no extra cost to you. I’m recommending them because I know and trust them from personal use; thank you in advance should you choose to use my links.