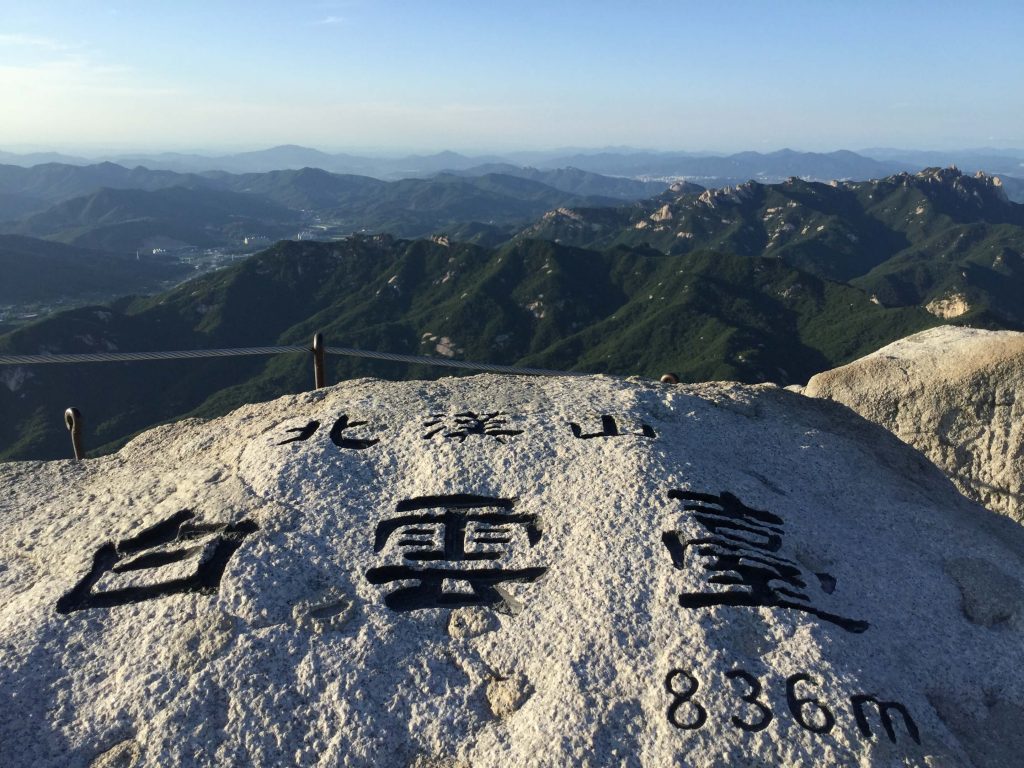 Bukhansan is the highest mountain in Seoul, and offers the best view to be had of the city. In fact, I’d rate it as perhaps the best view-of-a-city-from-the-top-of-a-mountain view that I know of; a fitting reward for the effort of hiking up there. Bukhansan’s written 북한산 in Korean script, coming from the Chinese characters 北漢山 basically meaning ‘Mountain to the North of the Han’. The Han’s the major river that cuts through the middle of Seoul, and Bukhansan is indeed located on the northern edge of the city. Standing up there on a sunny day, looking south you can see all Seoul spread out below you with the river winding through it like some sort of shining snake, with Namsan and Seoul Tower due south of you, Gwanaksan further off to their right, and the recently built Lotte World Tower (Korea’s tallest building) far off on the other side of the river in distant Gangnam to the left. Looking north, you’re looking up towards Dobongsan and ridge beyond ridge of mountain peaks fading into the distance (and, somewhere not so far away, the DMZ and North Korea, not quite visible from that vantage point). You can also just about make out Incheon city and the sea beyond, far off to the west. A cracking view – get up there and see for yourself!

The mountain stands at 836m so is nothing too daunting, but certainly requiring a couple of hours of huff and puff. It can be climbed in any season, but it gets very cold and icy at the top in winter. If you do want to climb it in winter you need to be prepared and equipped for temperatures far below zero (it was minus 10 at the top when I did so, and that was on a fairly warm day by Seoul winter standards) and more importantly for icy conditions underfoot – there weren’t many hikers up there that day, but they all had ice spikes strapped on to their hiking boots for the final section. All but me, that is, and I had to go very, very carefully on the icy granite – doing it without spikes, I would’ve found it impossible without the fixed chains to hold on to. The other problem that first time I climbed Bukhansan was the thickening fog – it was gathering as I set out and by the time I reached the top the visibility was awful and I saw little more than the flag on the summit. No views that day, so I figured I’d just have to do it again the next time I visited – and the next time I visited Seoul it was summer, so I waited for a crystal clear day to climb Bukhansan again and was treated to some glorious views (the lower sections of the hike were very sweaty in the summer heat, bring water and plenty of it – there’s a bunch of shops and vending machines near the park entrance). Most recently I did it in spring, which was perfect – sunny but not too hot, with the cherry blossoms in full bloom.

The two main routes are from Ui and Gupabal, on the mountain’s east and west respectively.

The opening of the Ui-Sinseol Line in 2017 makes the Ui route much more convenient, as you can start walking directly from the station (Bukhansan Ui Station, the line’s northern terminus). From exit 2 take the left turn and there it is: 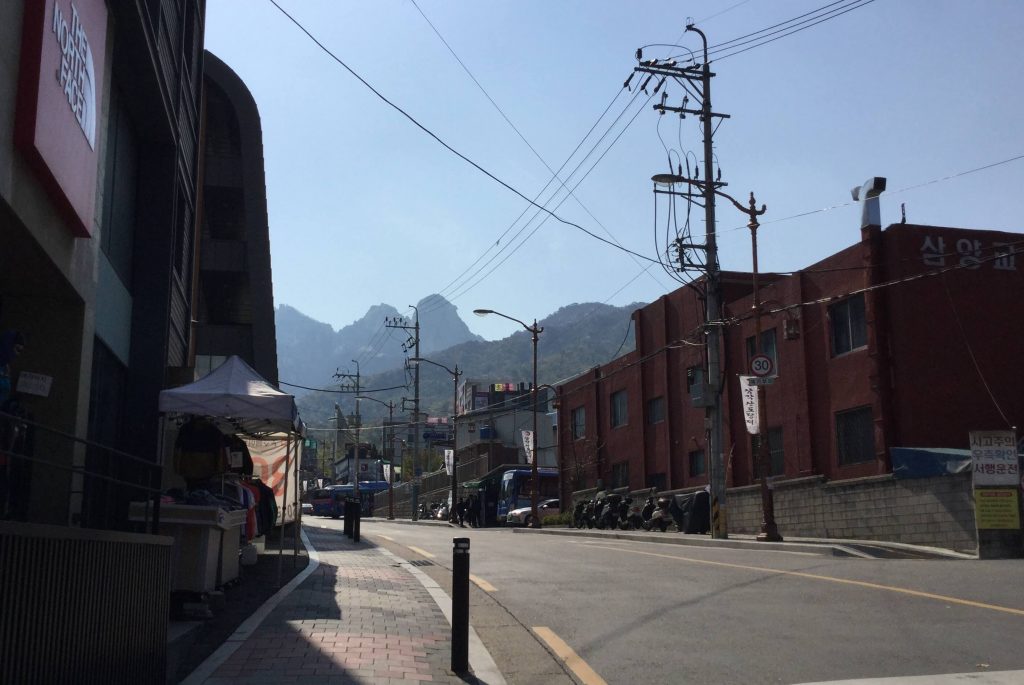 From there just walk straight up the road, passing this small plaza: 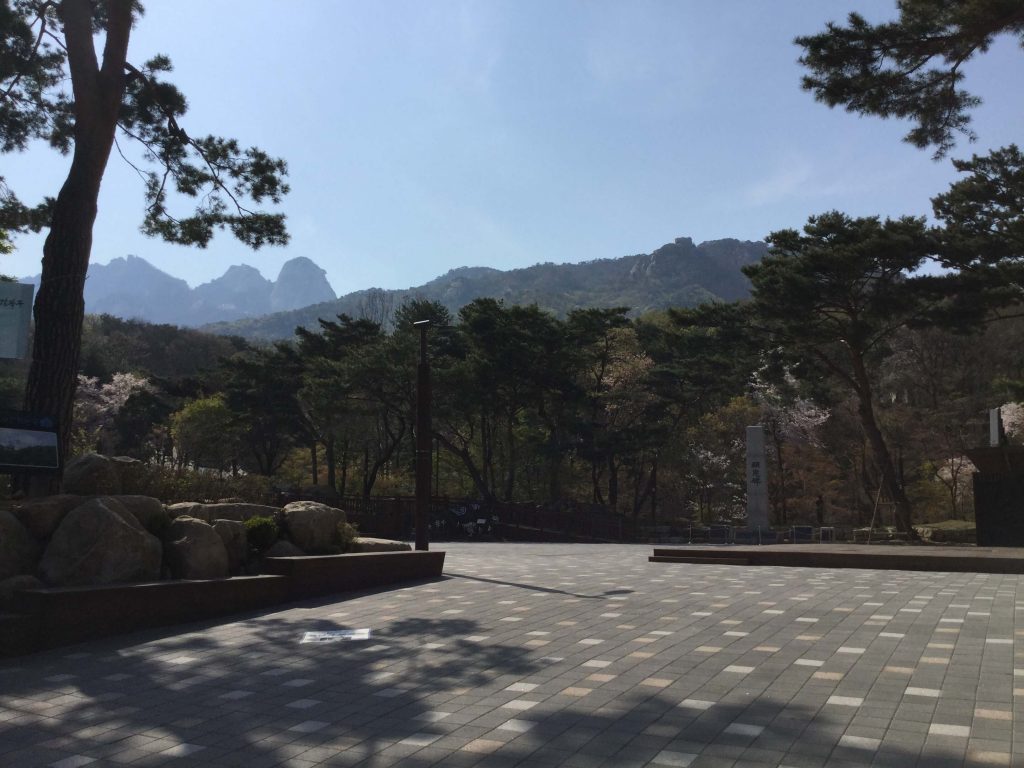 …and a ranger station: 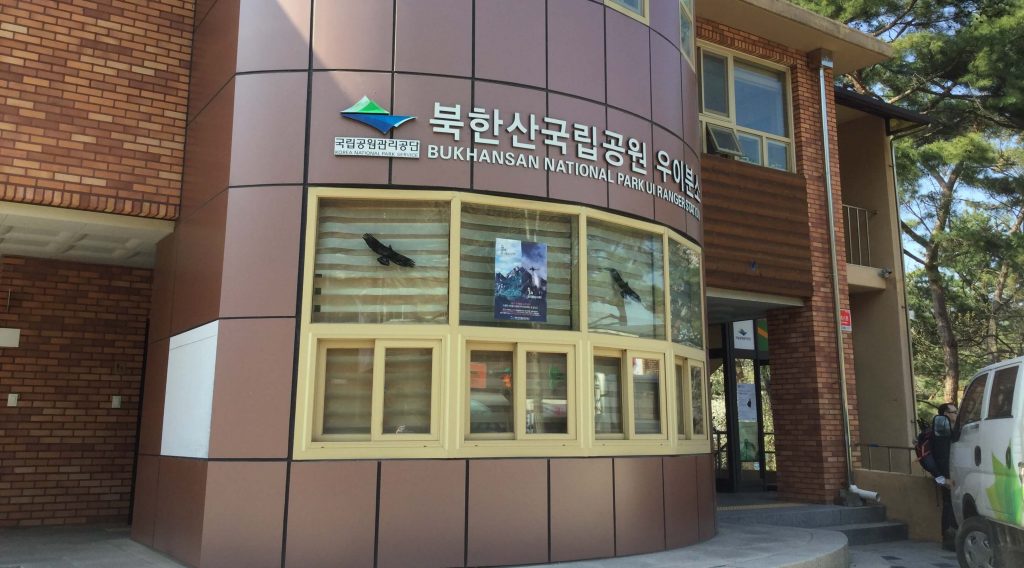 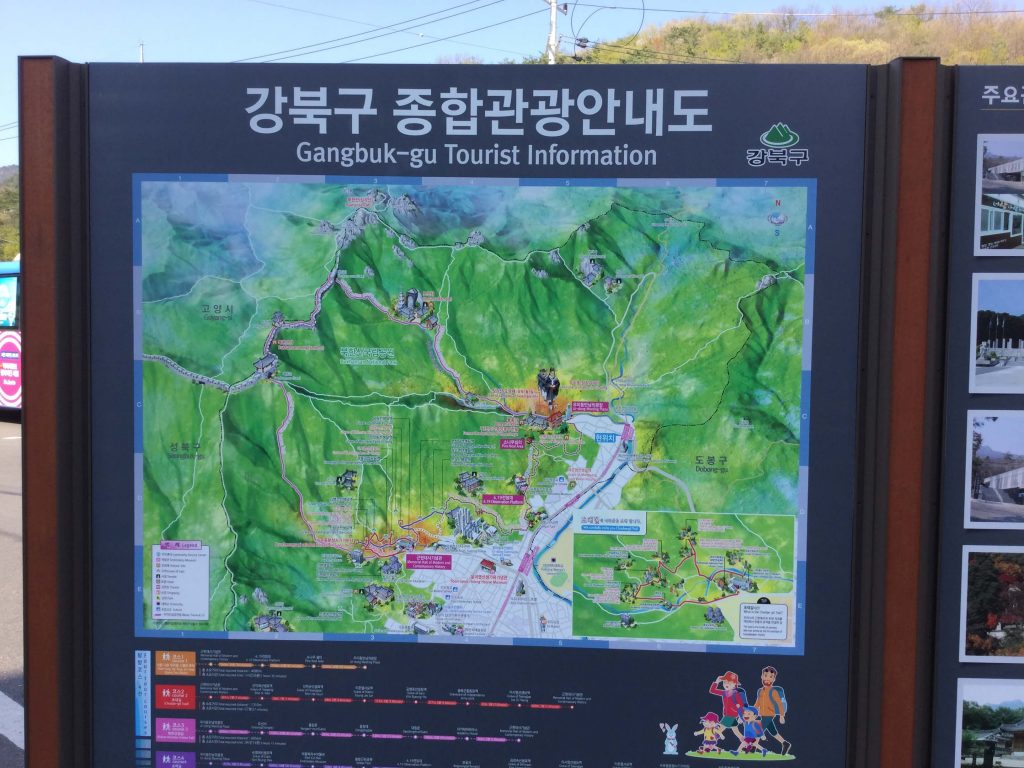 You actually follow this road up to Doseonsa Temple almost halfway up the mountain; it’s nothing too special, and if you have a car (or jump in a taxi) you can just drive up to Doseonsa and start walking from there. If walking all the way, there’s a walking path you can use instead of hiking up the road, which starts just on the right after the ranger station: 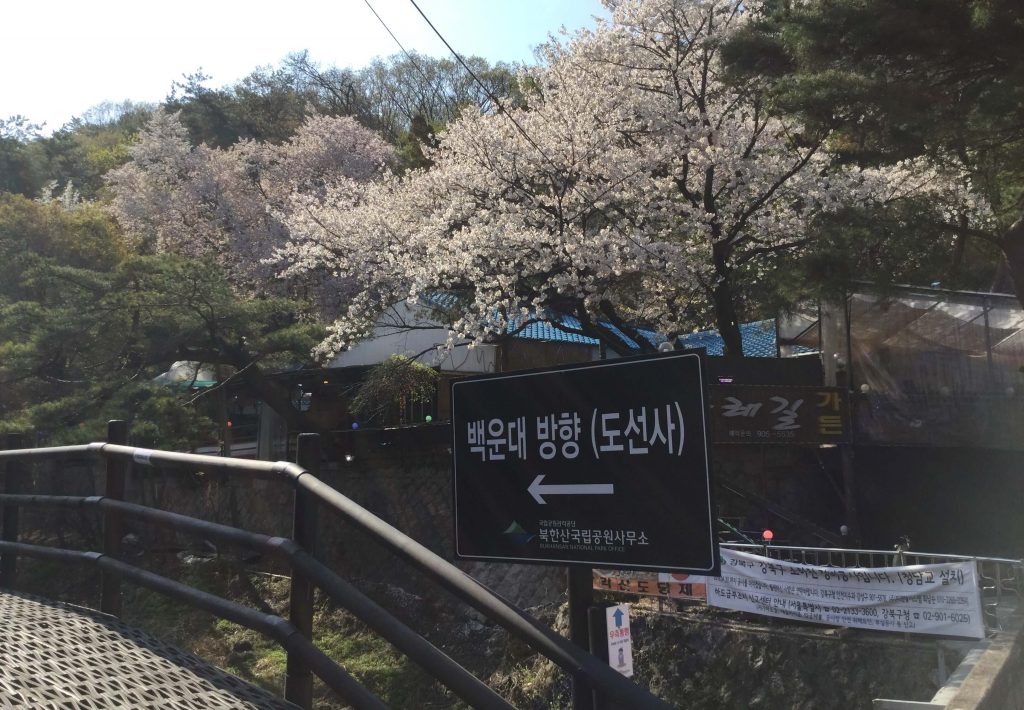 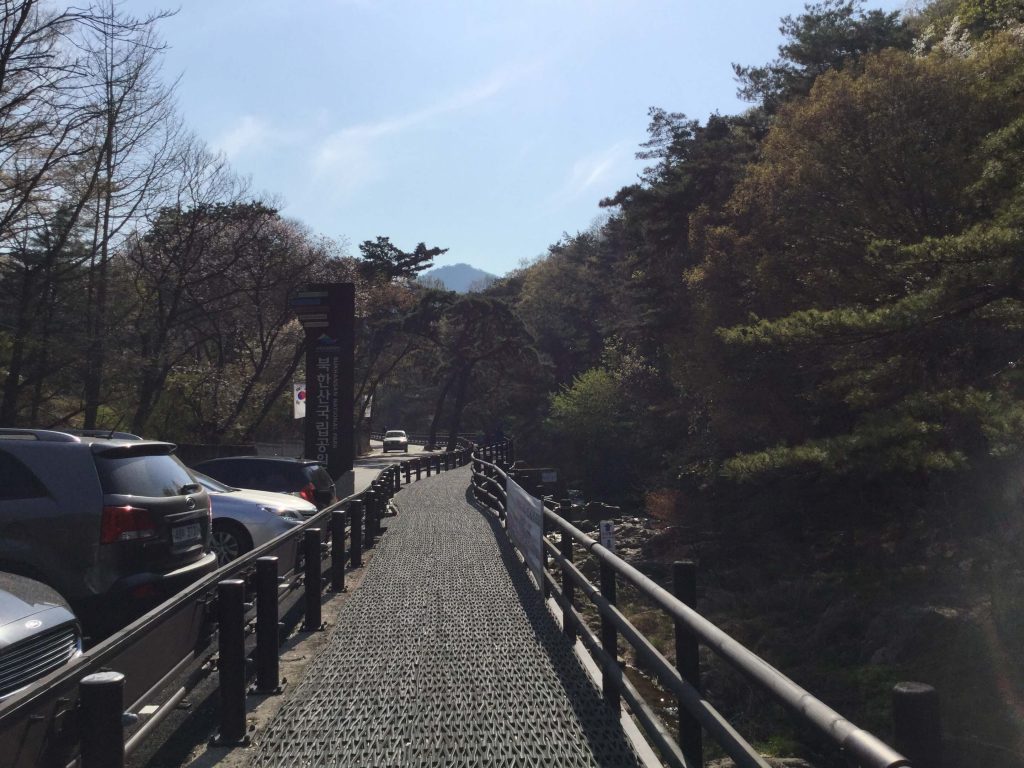 This runs partly alongside the road, but also meanders off a bit to the side before rejoining the road. Just keep following the signs for Doseonsa (도선사): 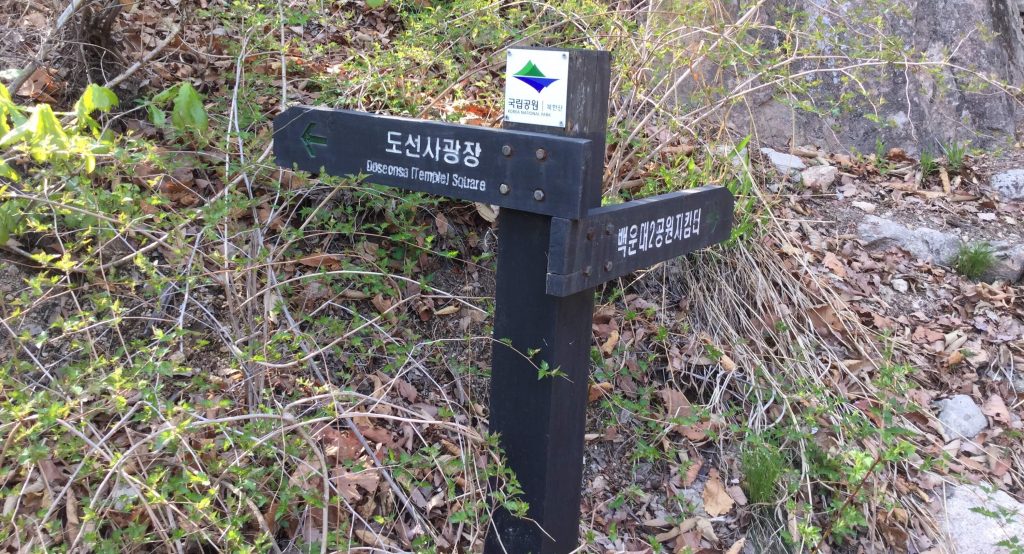 Eventually you reach the car park near the temple, from where the hiking trail proper starts: 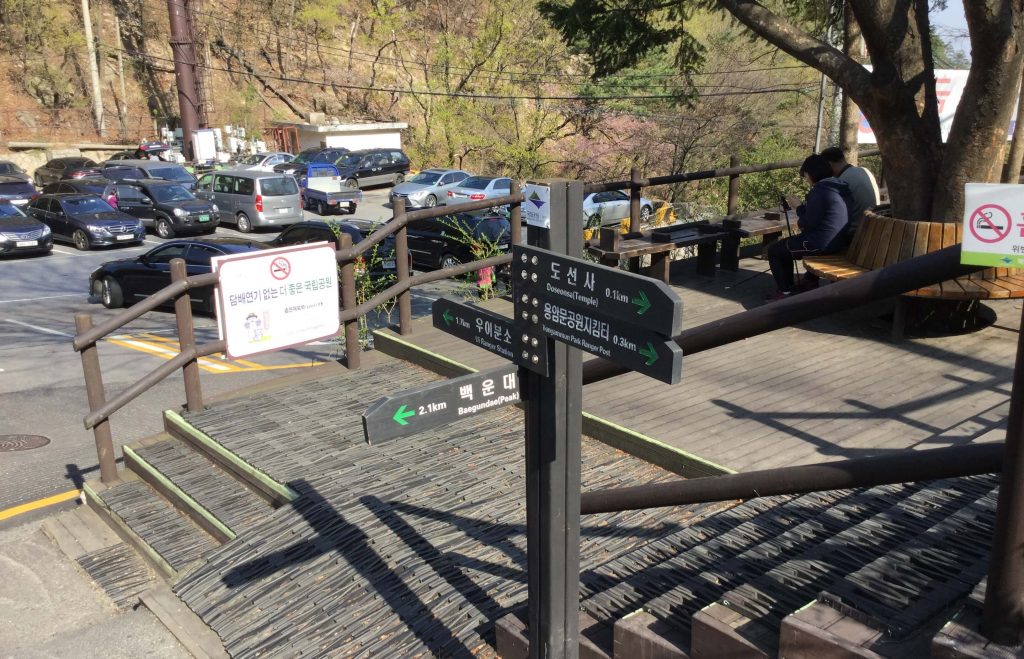 Doseonsa’s well worth a quick detour: 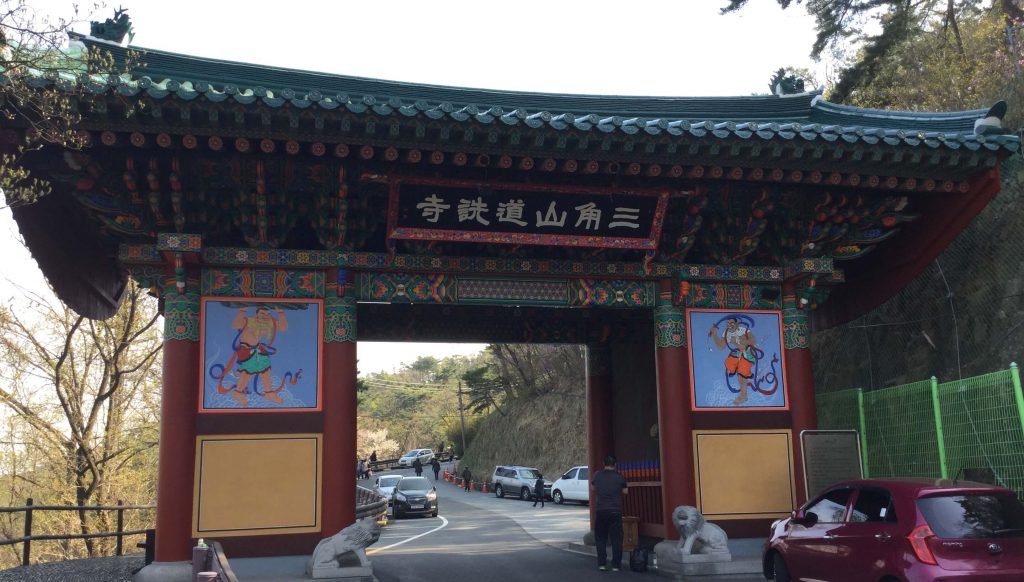 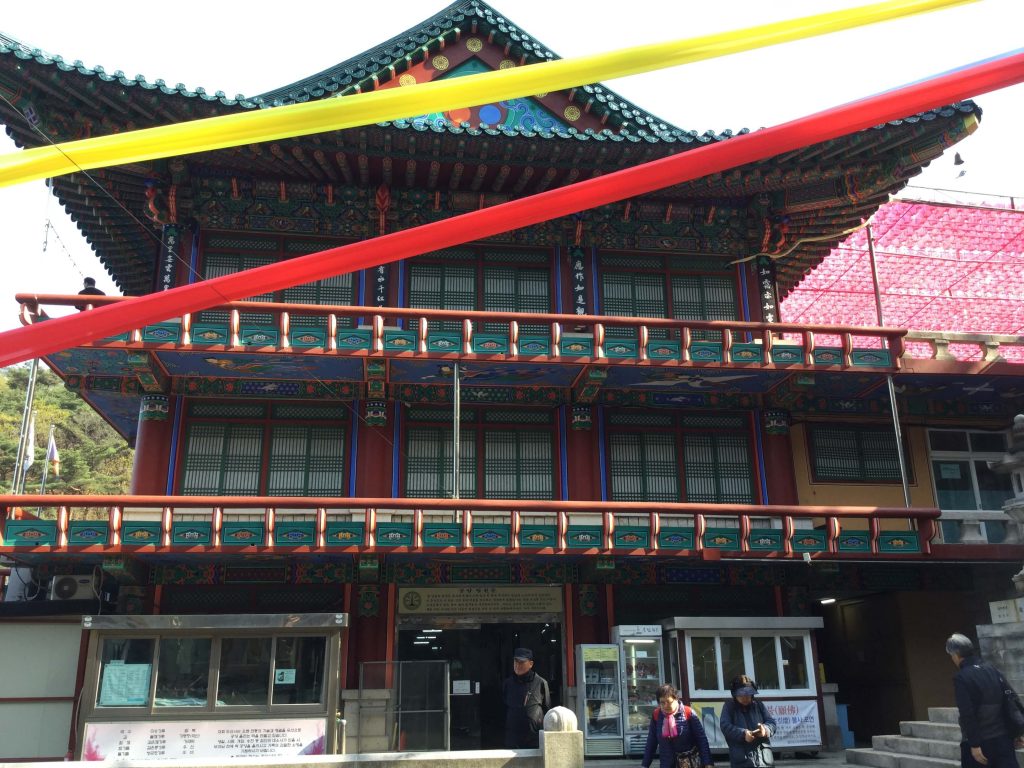 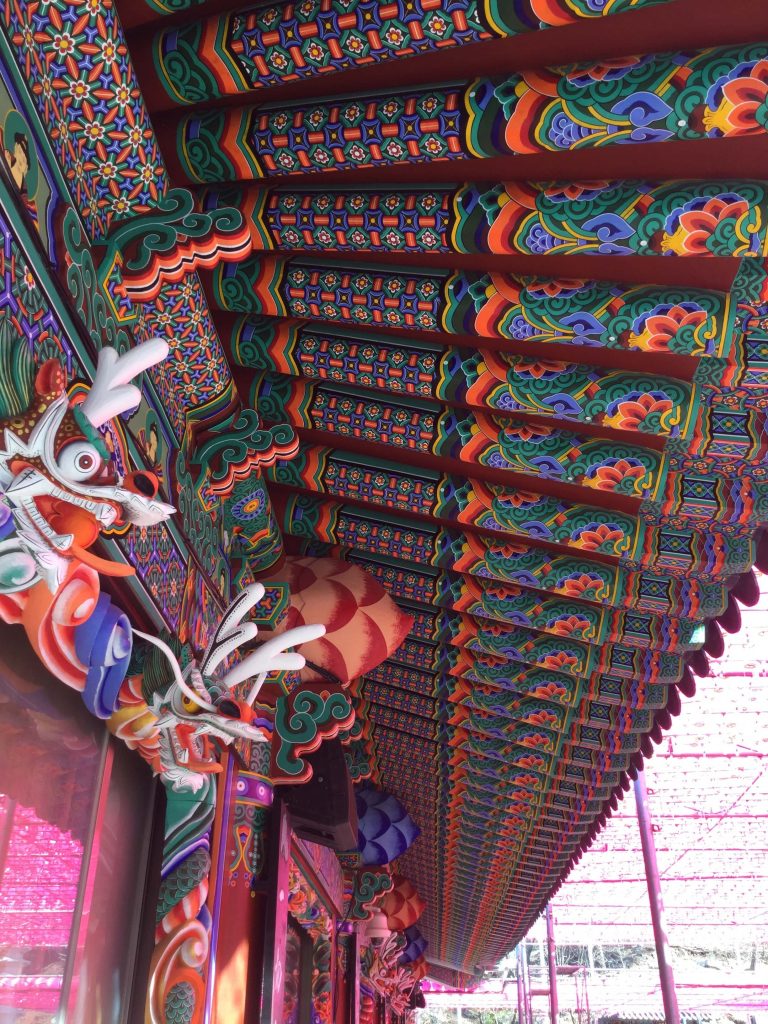 After you’ve checked Doseonsa out, head back to the car park and follow the sign for Baegundae (백운대), which is the name of the highest of the 3 peaks at the top of Bukhansan (a popular colloquial name for Bukhansan is Samkaksan, 三角山 (as seen on the temple gate above), ‘3-horned mountain’). Though there are a few rougher sections and some wooden steps, the trail mostly looks like this: 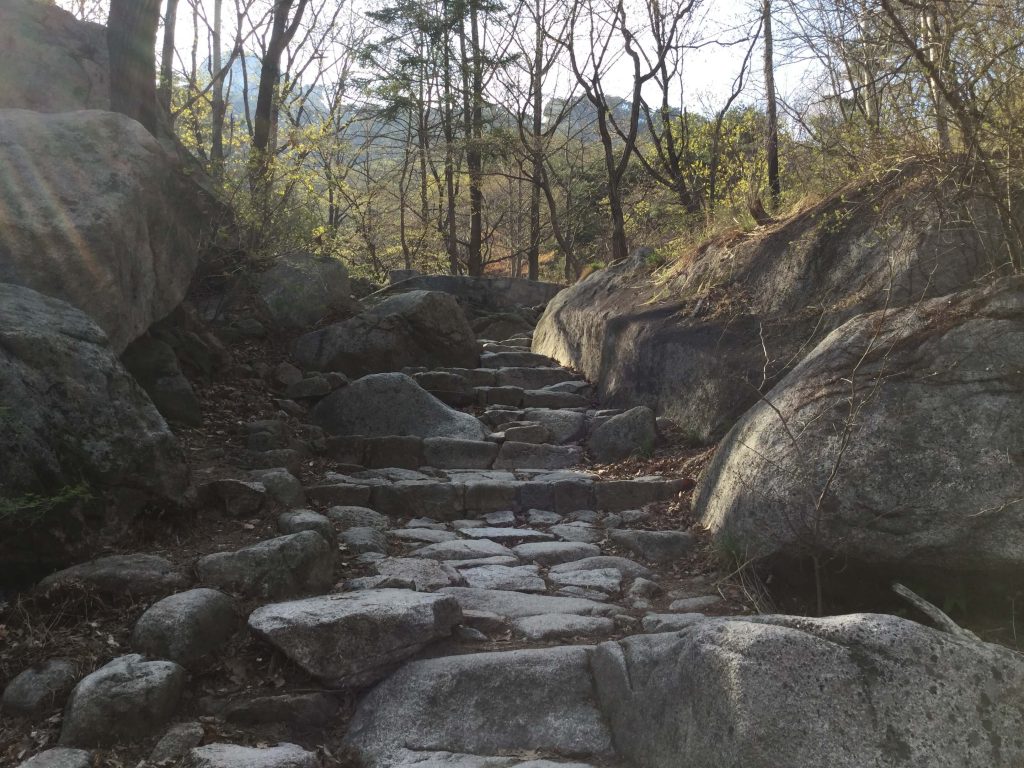 Keep following the signs for Baegundae… 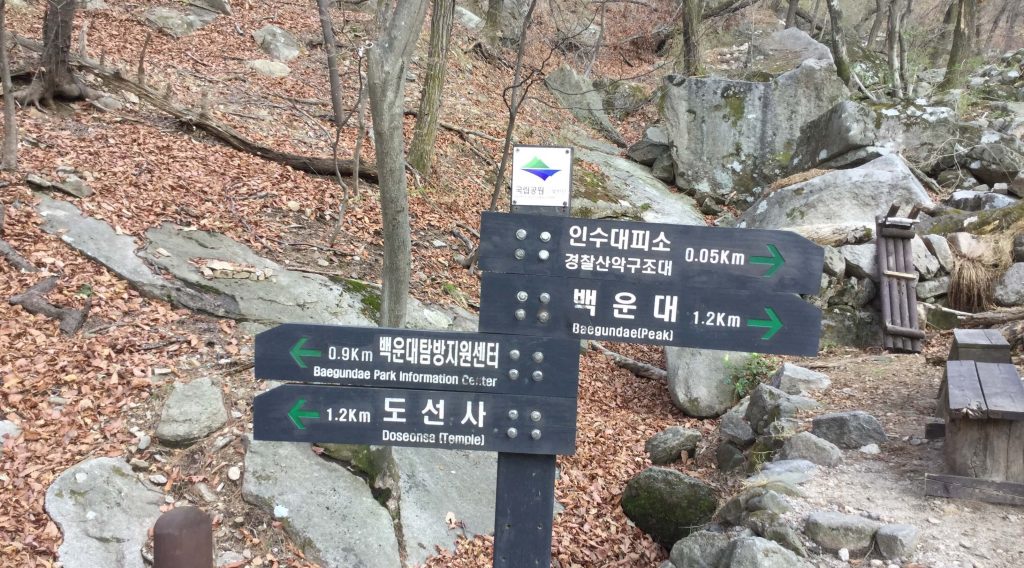 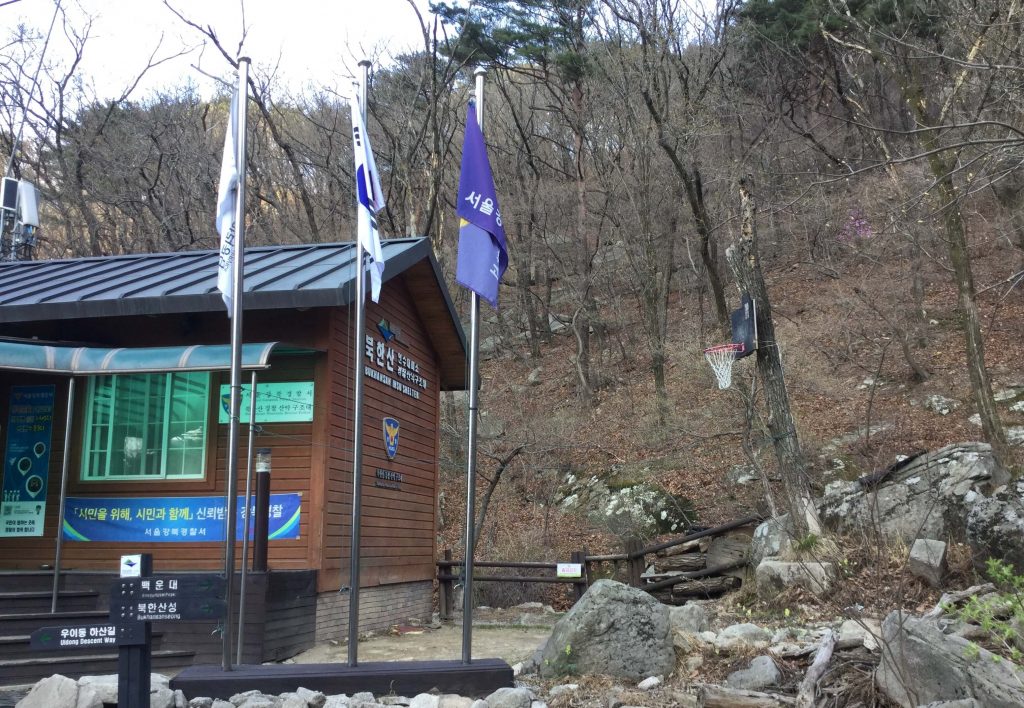 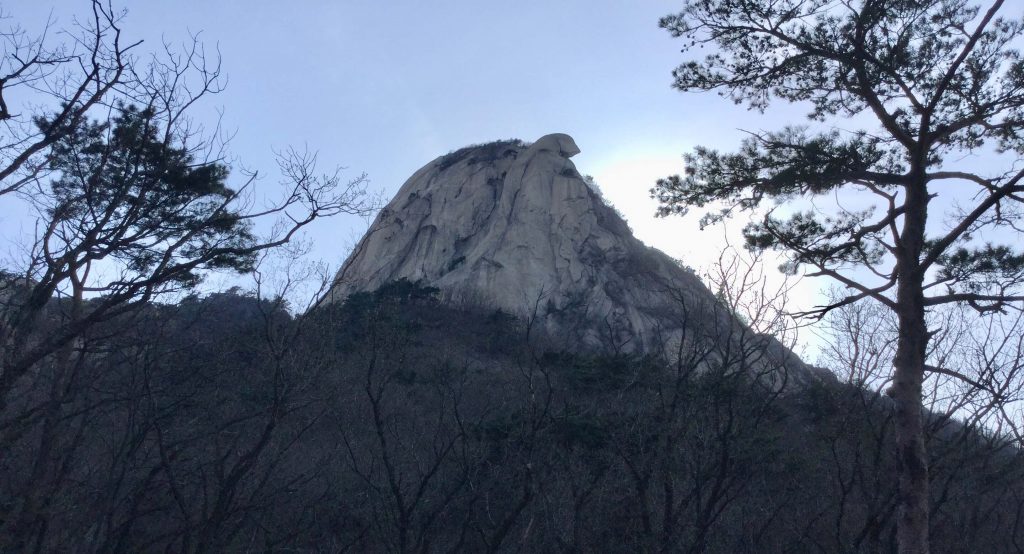 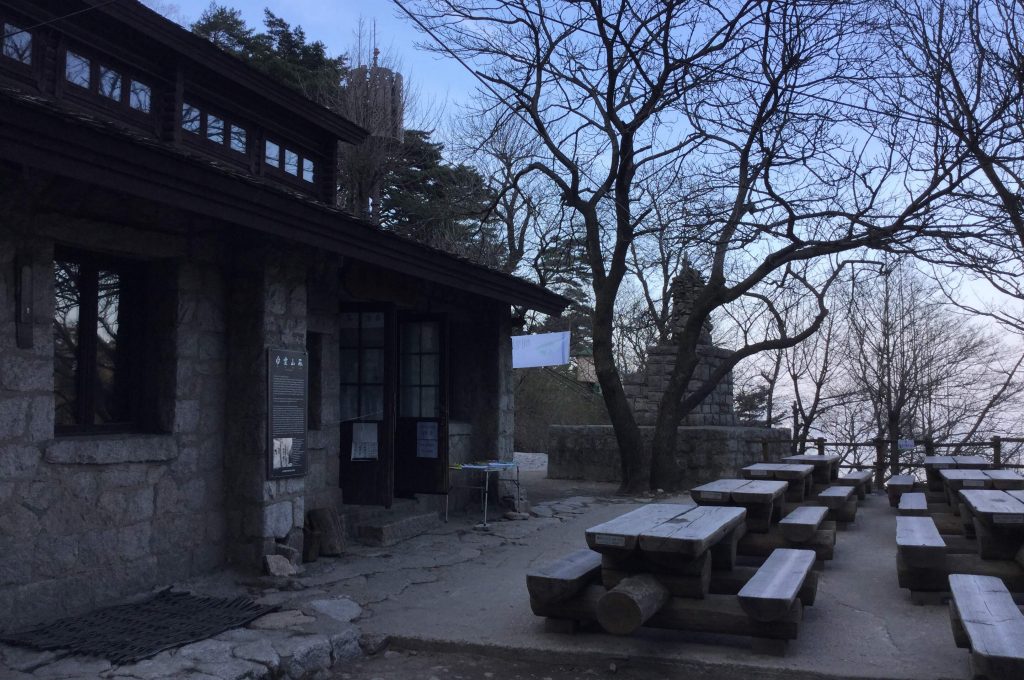 The shelter’s a nice place to stop for a break before the final push to the top. From there it’s a fairly steep climb up to the Wimun Gate, part of the old city defence walls, where you turn right to tackle the rocky dome on top of the mountain. 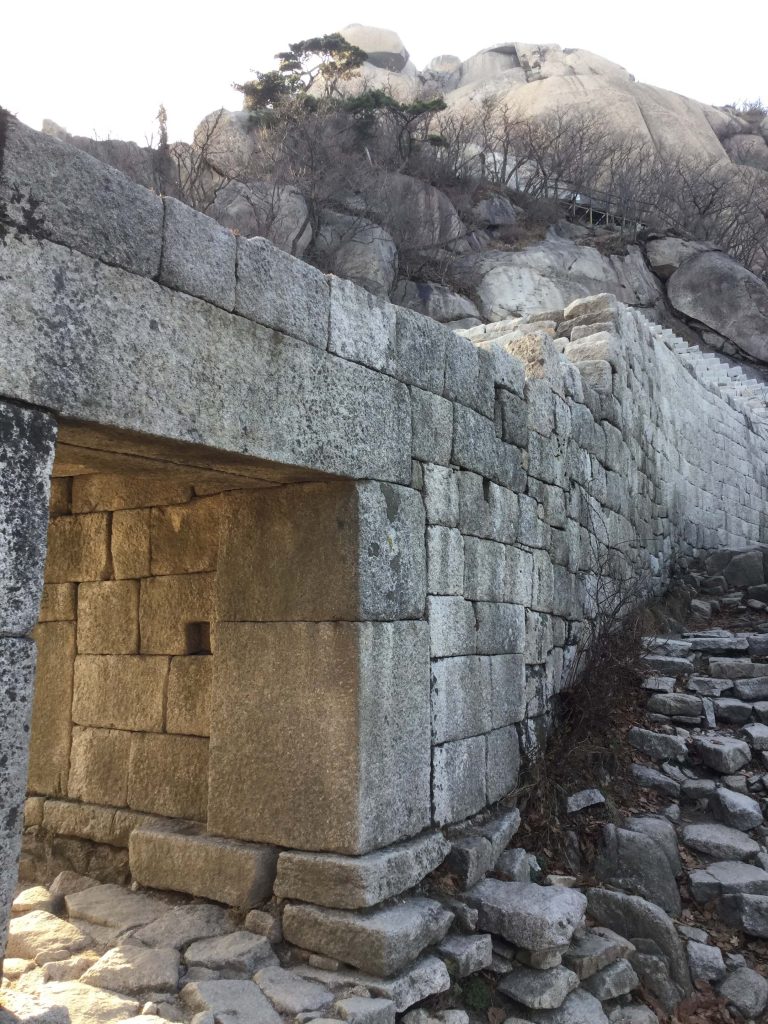 This is the only part of the hike which requires a bit of scrambling, but with the fixed chains in place it shouldn’t pose a problem (unless you’re up there in winter, in which case the ice does make it pretty sketchy – go easy!) 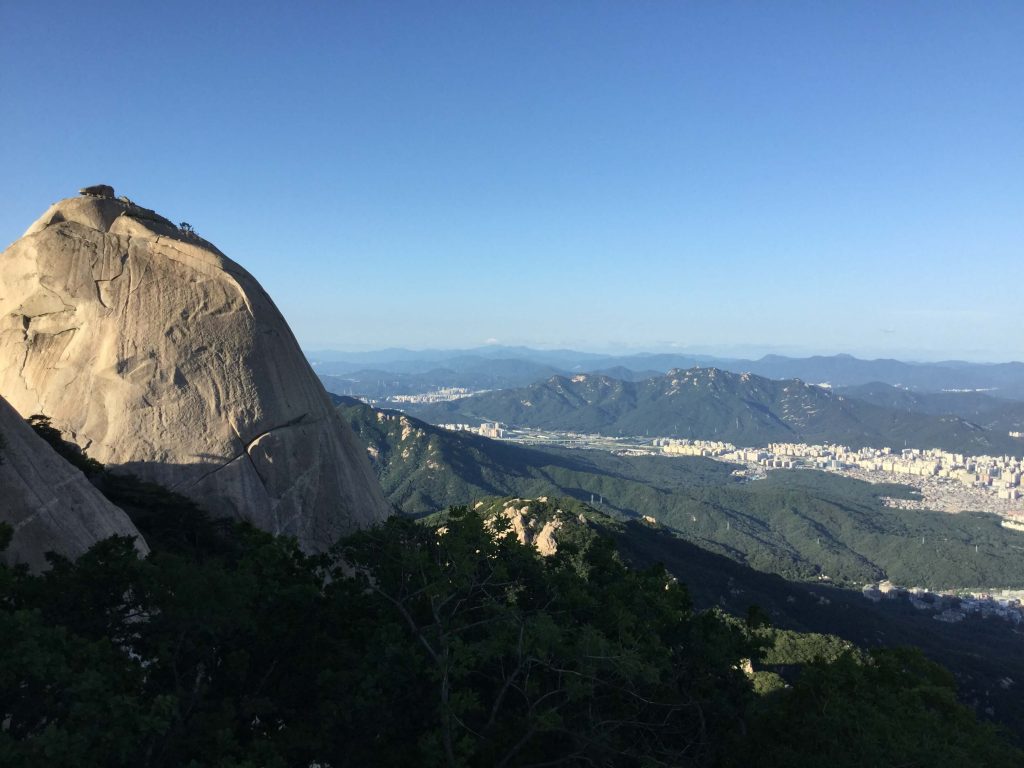 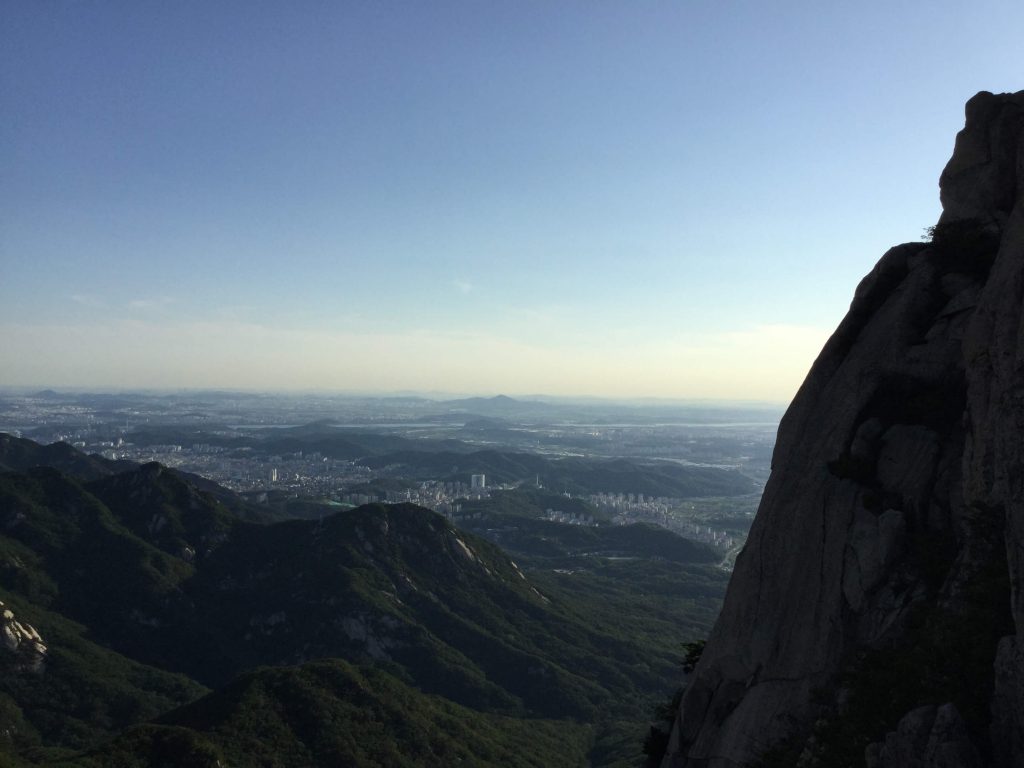 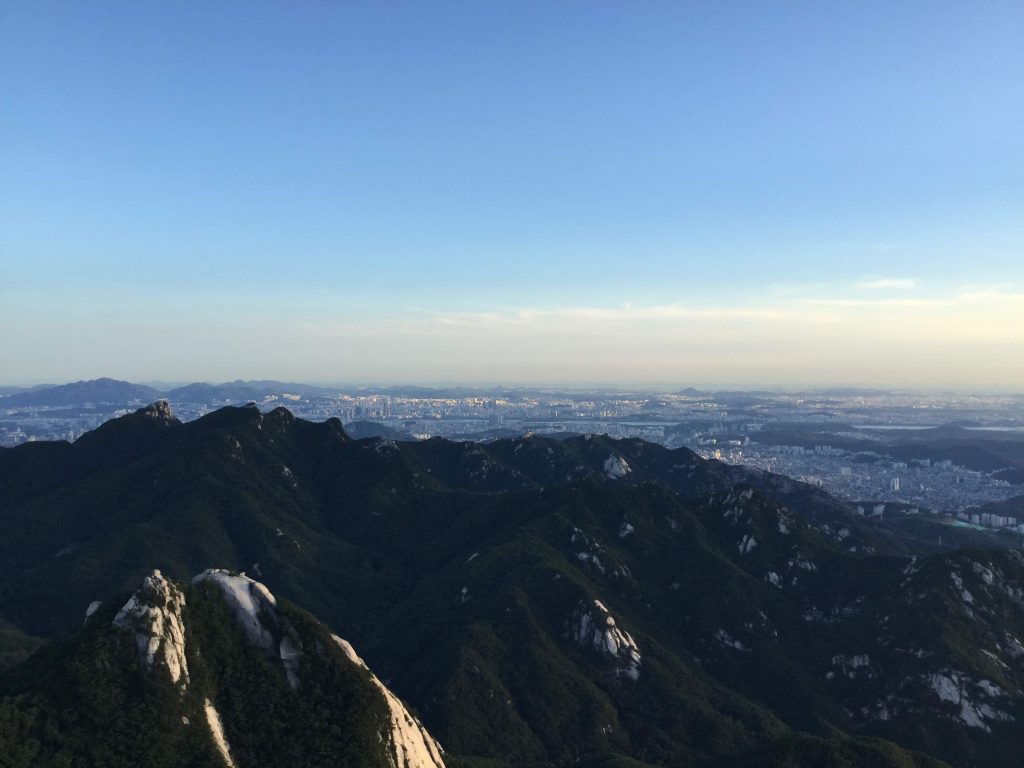 To hike Bukhansan from the other side, take Line 3 to Gupabal station, go out of exit 1 to the bus stop and then take bus number 704 to Bukhansanseong (북한산성) bus stop; after alighting, walk straight a short distance and then turn right off the main road and up past a bunch of restaurants and outdoor gear shops (or just follow all the obvious hikers) and you’ll find the park headquarters (where you can get maps and information) and the trailhead, which starts you off walking up alongside a small river. It’s fairly gentle at first, but as you go up further into the forest and lose the river the trail gets fairly steep, so you do feel it in your thighs going up and again in your knees heading down; it isn’t difficult though, and the majority of it’s on well-maintained trails with a section towards the top being on a kind of elevated wooden walkway / long flight of steps. These wooden steps bring you up to Wimun Gate, from where you turn left for the final section, leaving the forest and climbing up the granite slabs at the summit of the mountain.

If you plan on traversing the mountain by doing both trails, I’d recommend starting from Gupabal to finish at Ui, mostly so you don’t have to deal with bus navigation after the hike!

Have you climbed Bukhansan? How was the view? Any questions to ask or tips to share? Leave a comment below and I’ll get back to you.