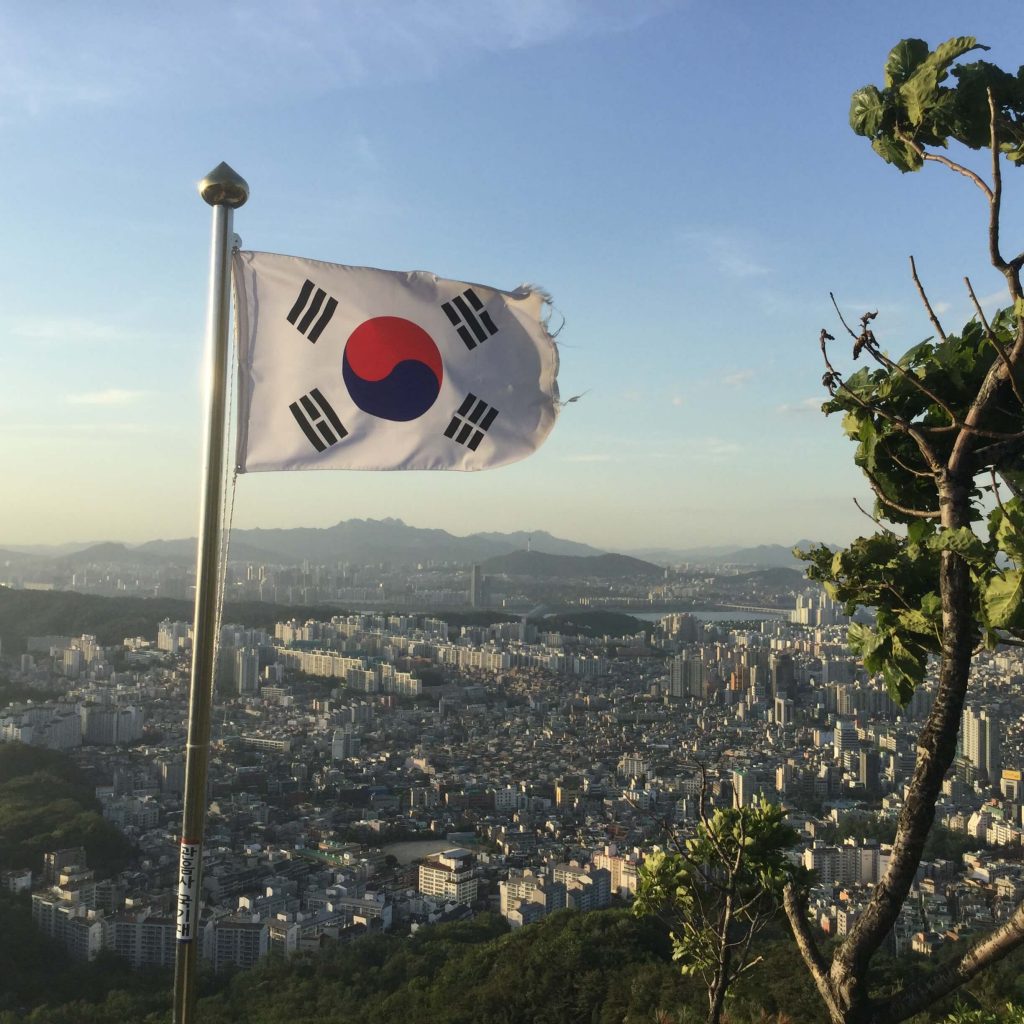 Gwanaksan (관악산, or 冠岳山 in Chinese characters) is located on the southern edge of Seoul, forming part of the boundary between Seoul city and the neighbouring province of Gyeonggi-do. Standing at 632m it isn’t as high as Bukhansan and Dobongsan on the city’s northern edge, but it’s more easily reached from most of Seoul so offers a good combination of being very convenient but still getting up to a good height above the city; it’s also home to some beautiful temples, and the city views are awesome on a clear day. Gwanaksan is therefore very popular with the legions of Seoul hikers and the trails and viewpoints can get pretty crowded on weekends in fair weather; try to hike it on a weekday if you can.

There are three main routes up Gwanaksan; the most-trodden trail goes up from Seoul National University on the west side of the mountain, with another good trail up the east side from Gwacheon Station on Line 4. These two trails are well-maintained, easygoing hiking paths through the forest; the most interesting trail is the one up the north ridge from Sadang, which is far more exposed and therefore offers cracking views out across Seoul from multiple viewpoints on the way up. The Sadang trail also covers much rougher terrain with some rock scrambling in places, which is fairly serious on the final section with fixed ropes and chains for you to pull yourself up.

My recommended route for hiking Gwanaksan is to go up the Sadang trail, then descend to Gwacheon rather than SNU as Gwacheon has direct subway access (meaning you don’t have to mess around with buses). However, for those who don’t like heights or don’t feel confident about tackling the semi-rock climbing sections on the Sadang route, I recommend going up from SNU and down to Gwacheon (or vice versa).

Roughly speaking, each of the routes takes around 90 minutes to 2 hours one way, though the Sadang route is slightly longer and tougher than the others so may take a little more time. You might also spend a while at the summit enjoying the views and checking out the temple buildings, so as a rough guide you can probably expect a 4 to 5 hour hike.

There’s quite a lot going on at the top of Gwanaksan, with a radio broadcast facility (which is the upper end of a staff-only cable car from Gwacheon), a radar station, and the large Yeonjuam Hermitage (연주암) complex including the famous clifftop Yeonjudae temple. The mountain actually has twin summits, with the radio antennae on the south summit and the radar station on the north summit; the south summit is completely covered by the radio facility and inaccessible to hikers, so the goal for your hike is the north summit. There you’ll find a big slab of granite just below the radar ‘golf ball’ to chill out on and take photos from, and Yeonjudae which is accessed via a small path round the cliff top.

The rest of the Yeonjuam Hermitage buildings are spread out just below the ridge connecting the two summits, on the east side of the ridge.

Take exit 4 from Sadang Station, walk straight past the bus stops and up the little slope on the right, and turn right on Seungbang-gil just after this sculpture: 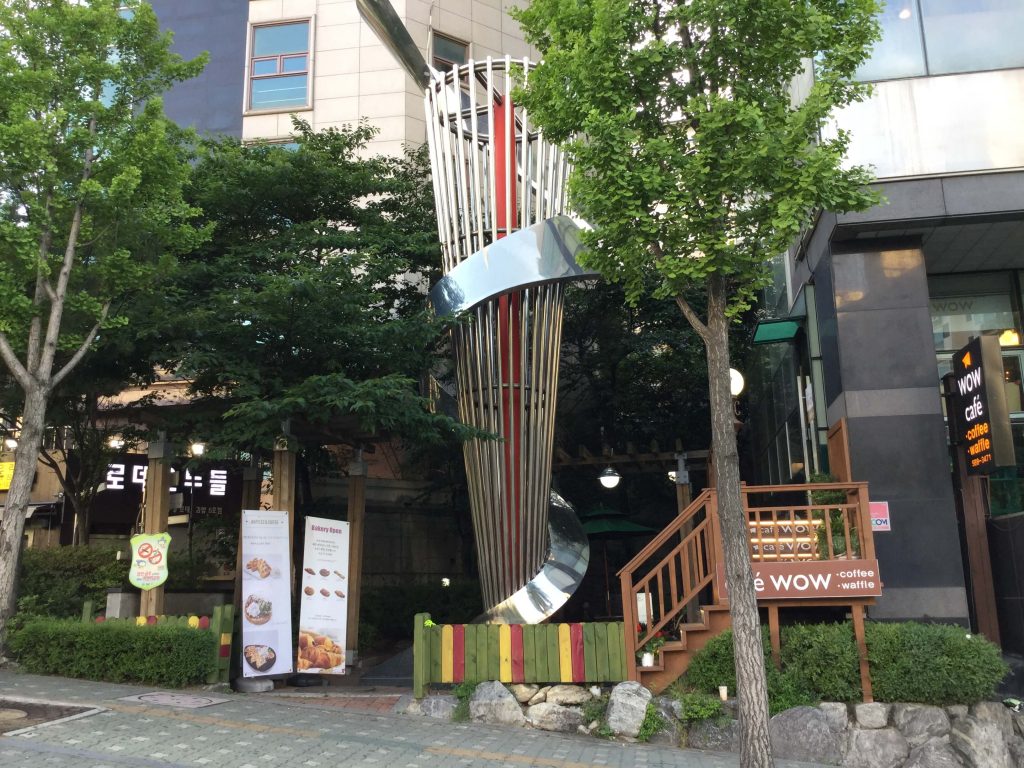 Follow the road to the end, passing this map: 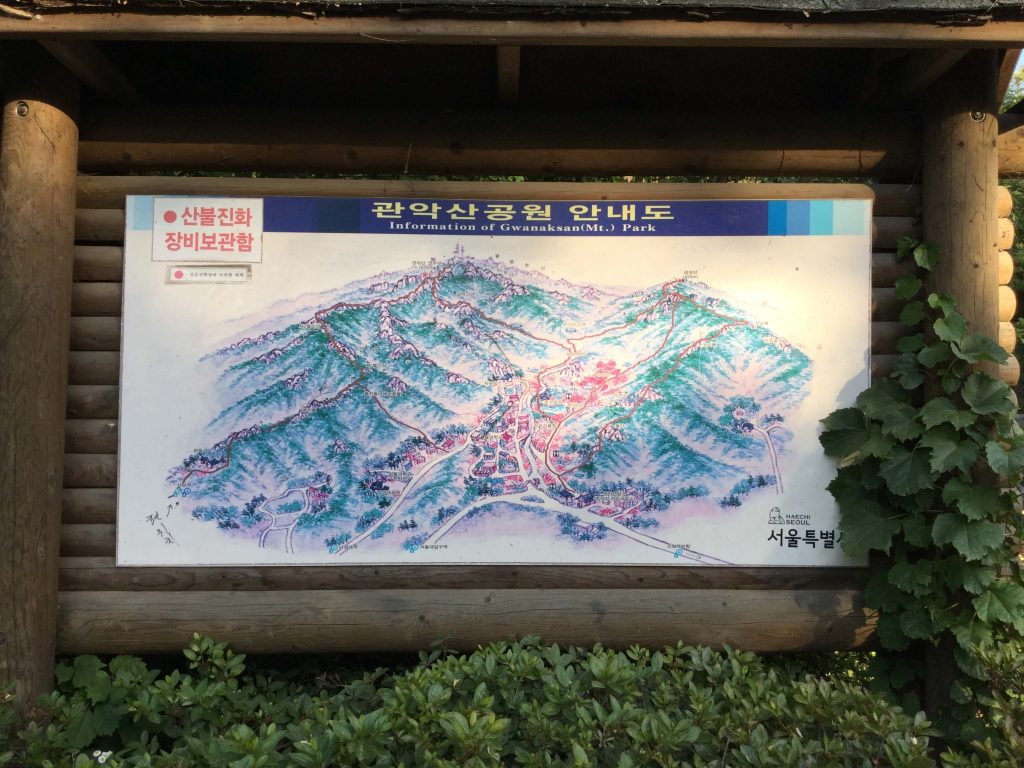 …and continue up following the signs for Gwaneumsa temple (관음사): 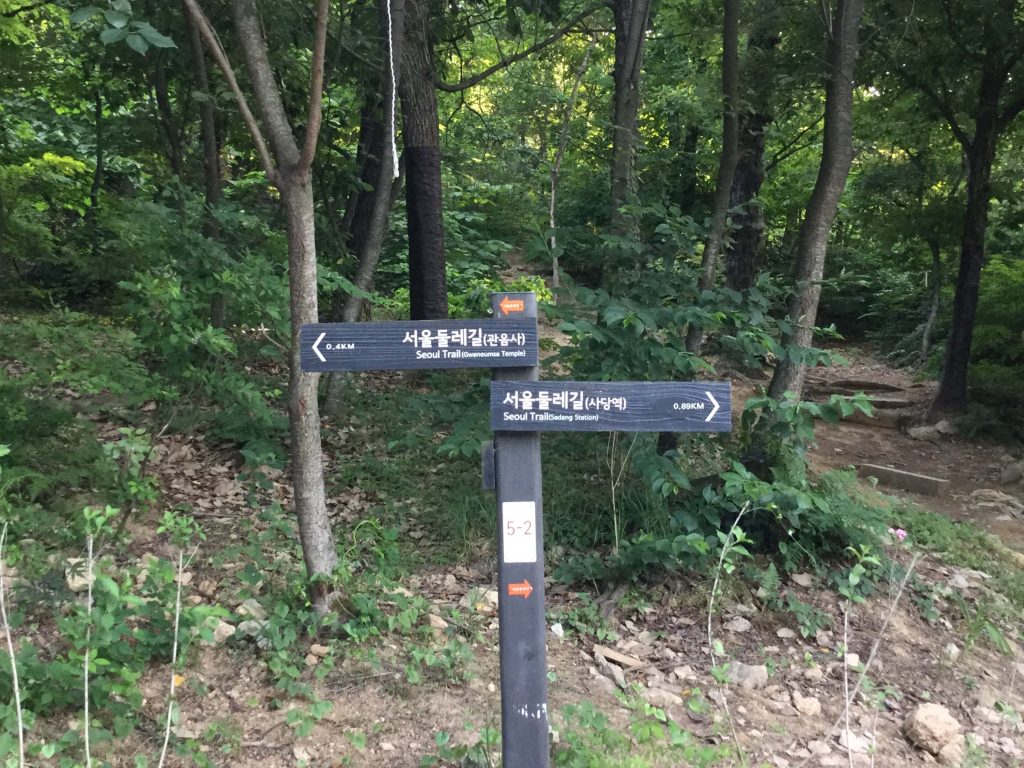 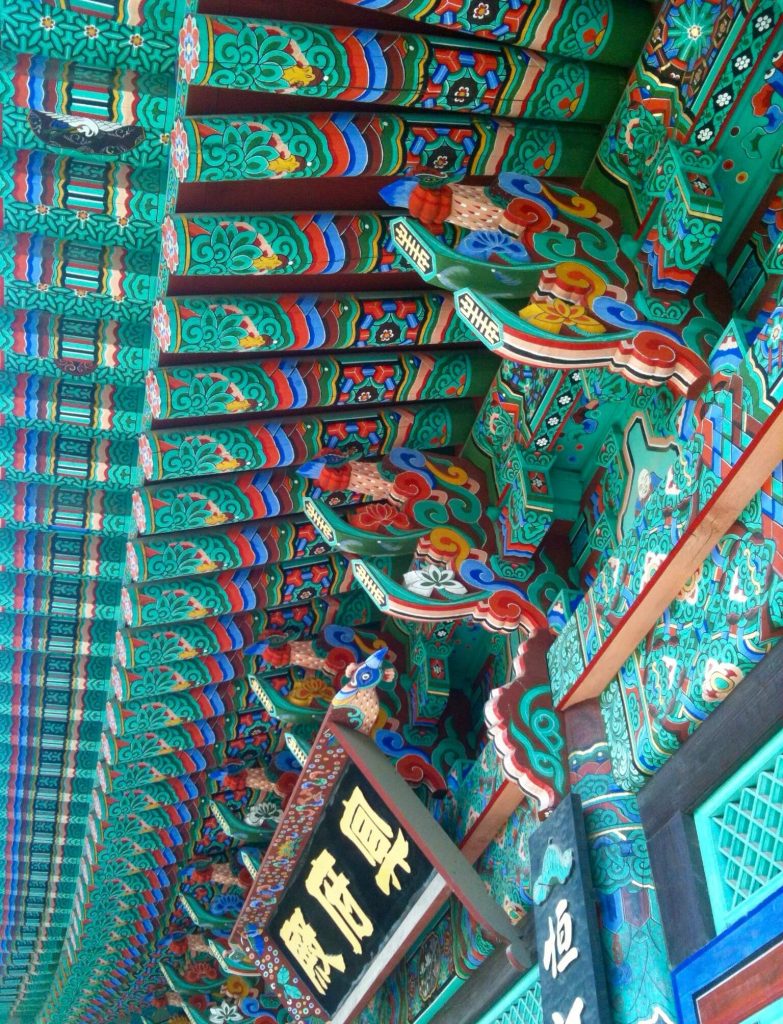 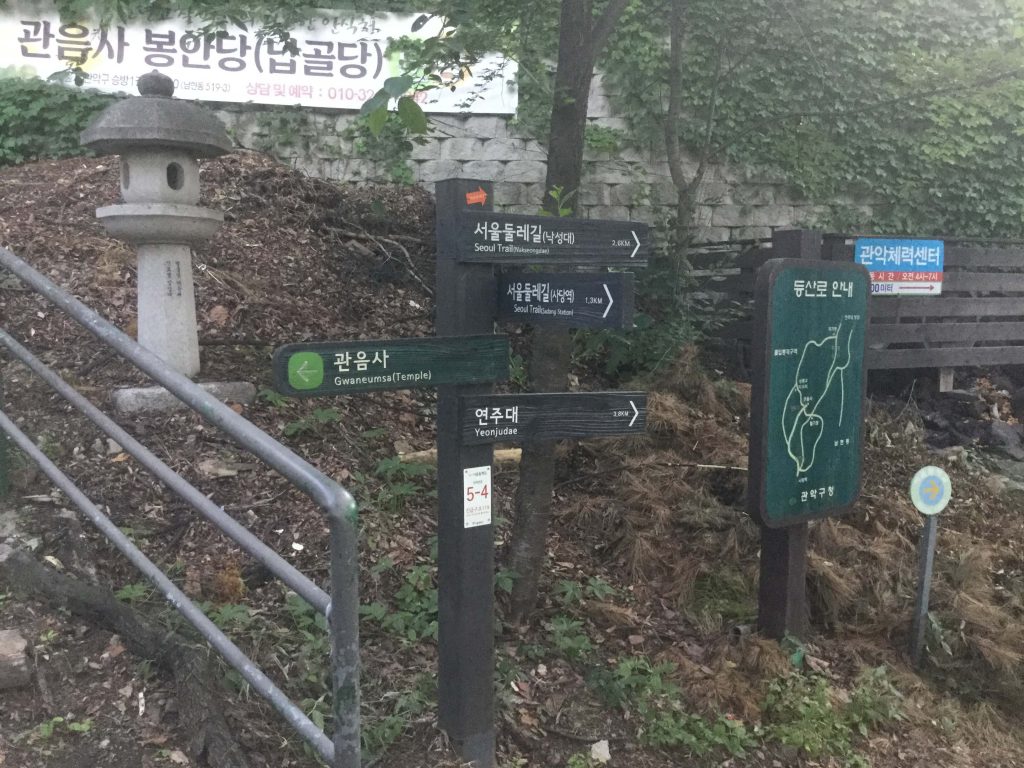 This takes you through one of the open air gyms which are a common sight on Seoul’s mountains; if it’s a nice day there’ll likely be a bunch of people using it. Just after the gym, at this signpost make sure to take the path for Yeonjudae (and not the Seoul Trail): 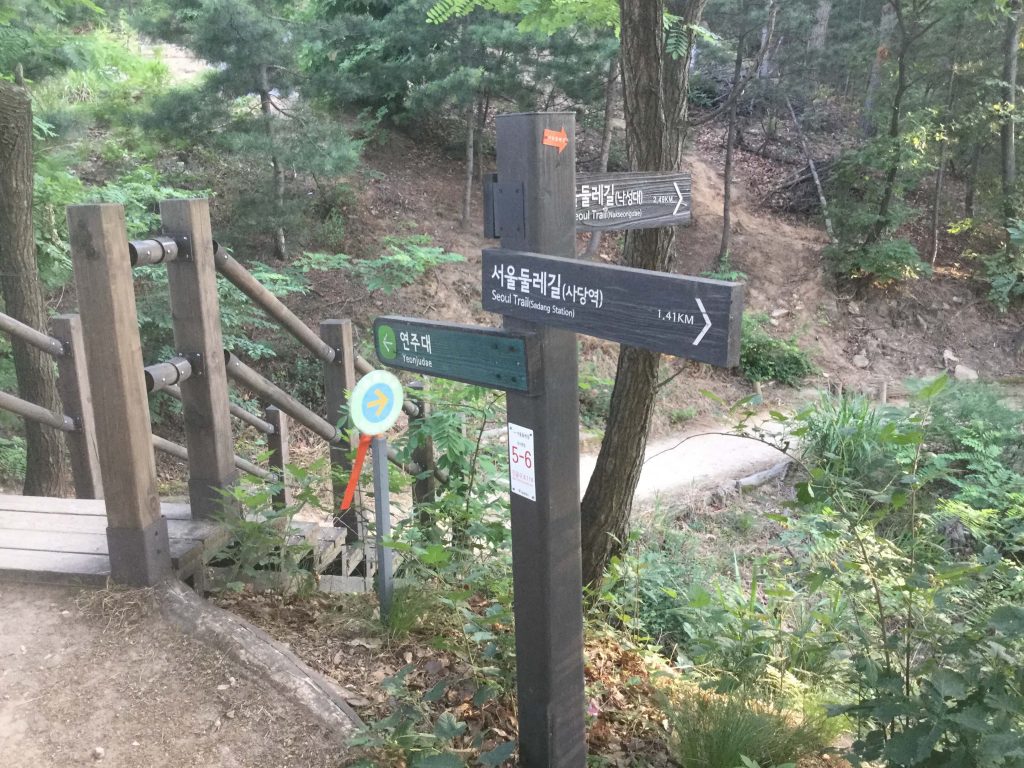 From there, the way is generally clear. As you hike up you’ll pass a number of helipads and military bunkers (pay attention to the ‘no entry’ signs! They’re in Korean, but obvious enough), little reminders of the unfinished business between North and South Korea which can be so easily forgotten as you go about daily life in Seoul: 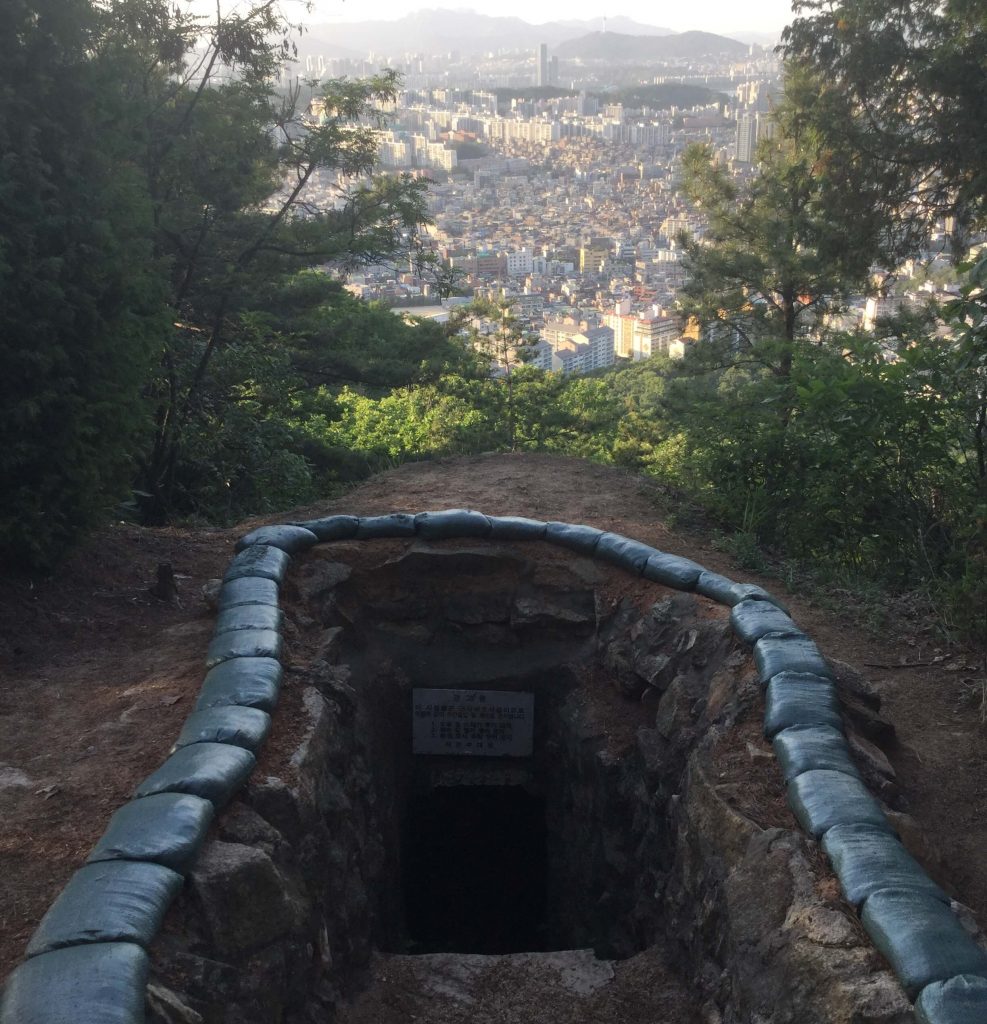 Last time I was there, one of the signposts was broken: 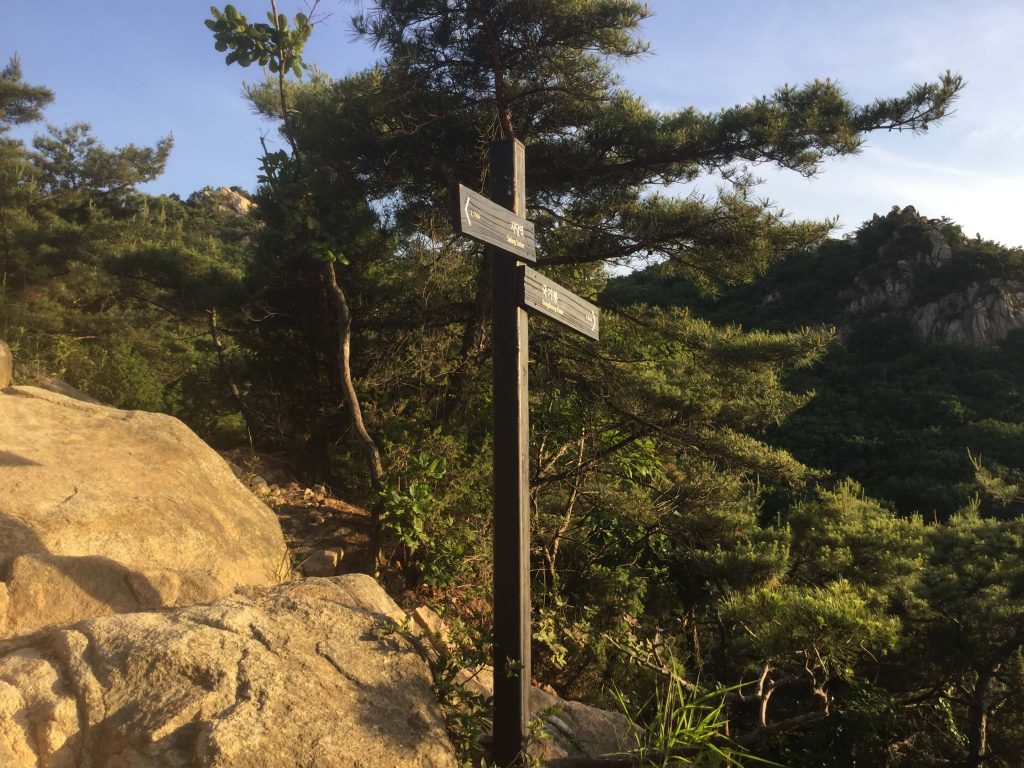 The best route is actually up to the left from there, scrambling up these slabs: 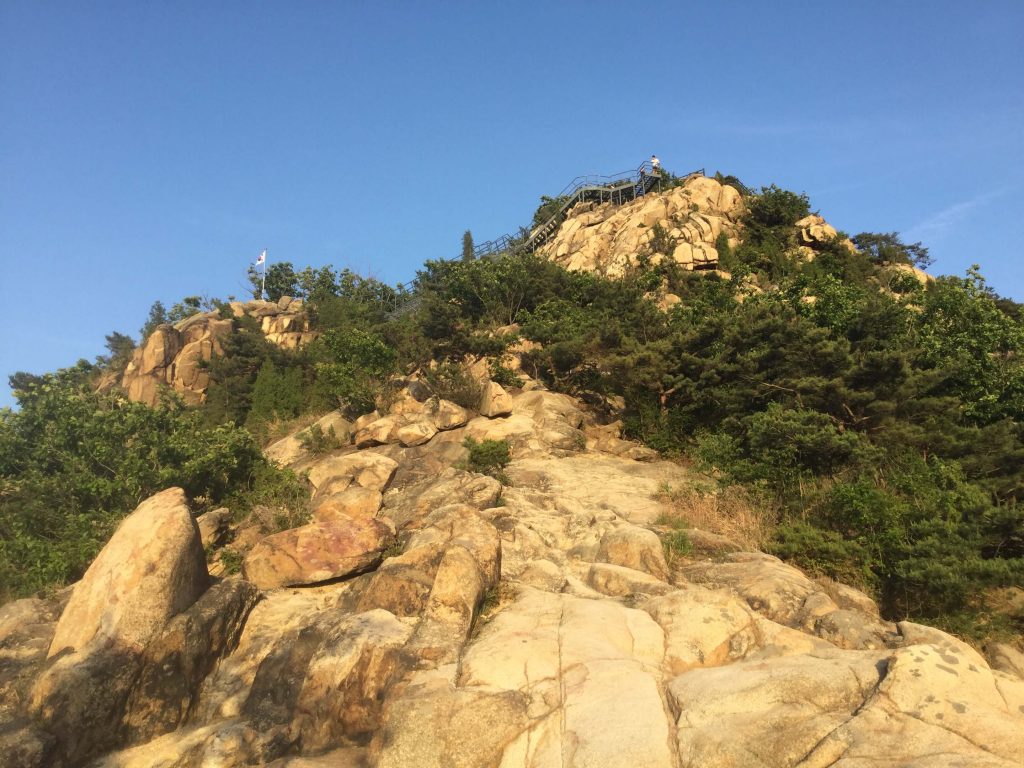 Update (2020): not only have they fixed the broken sign, they’ve actually installed a new set of wooden steps up the first section of slabs. 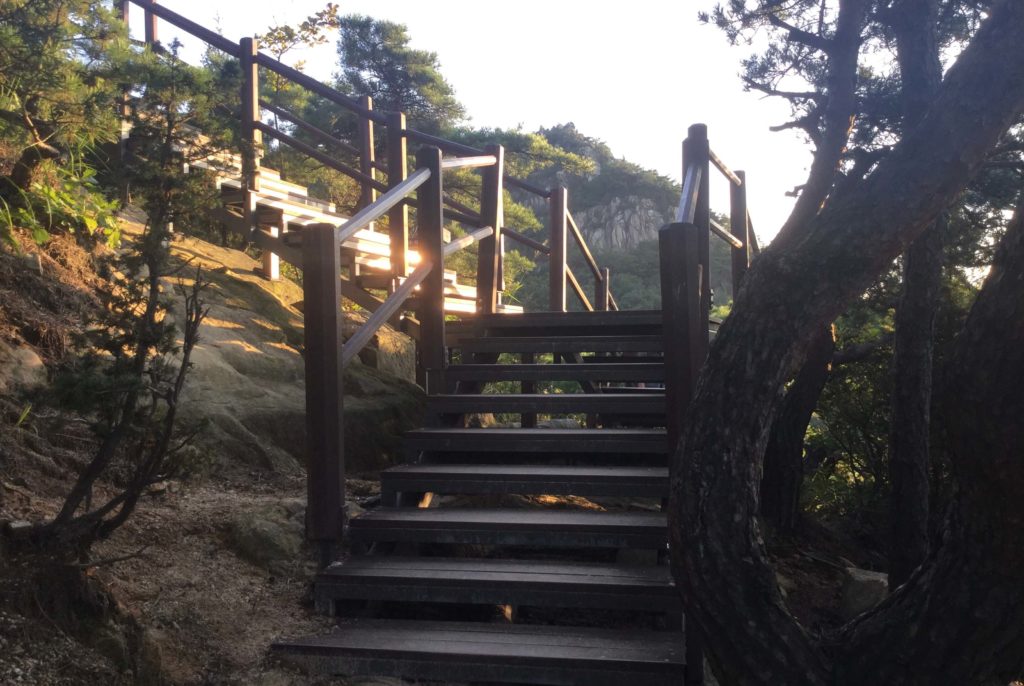 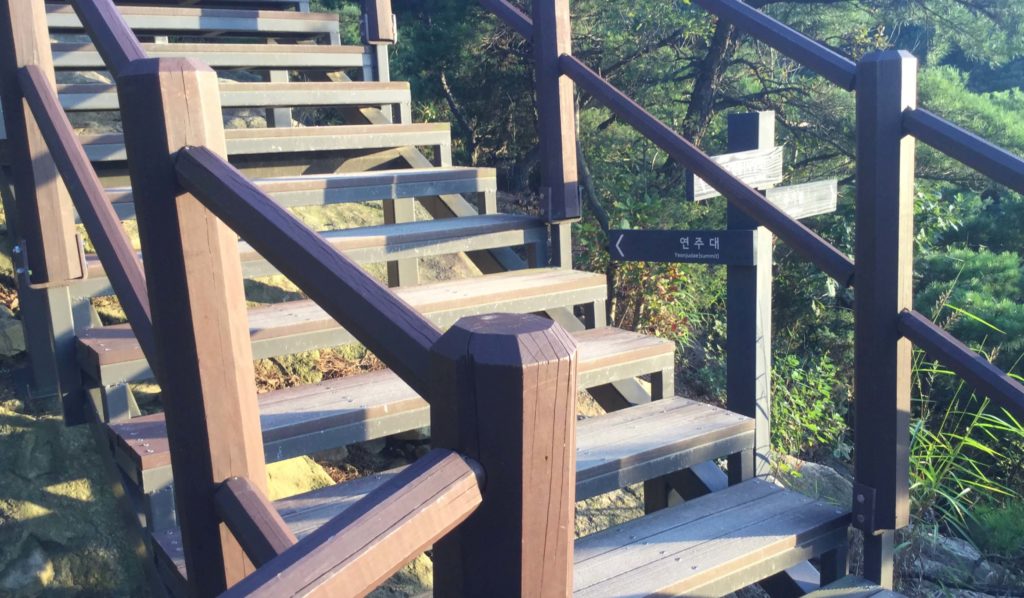 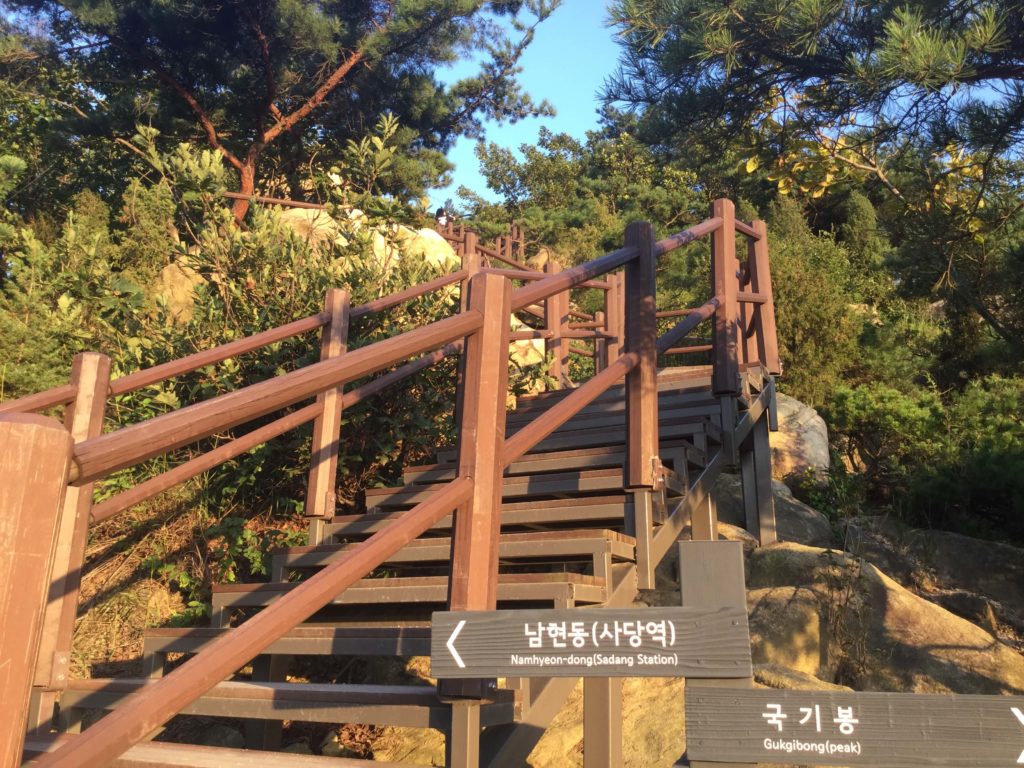 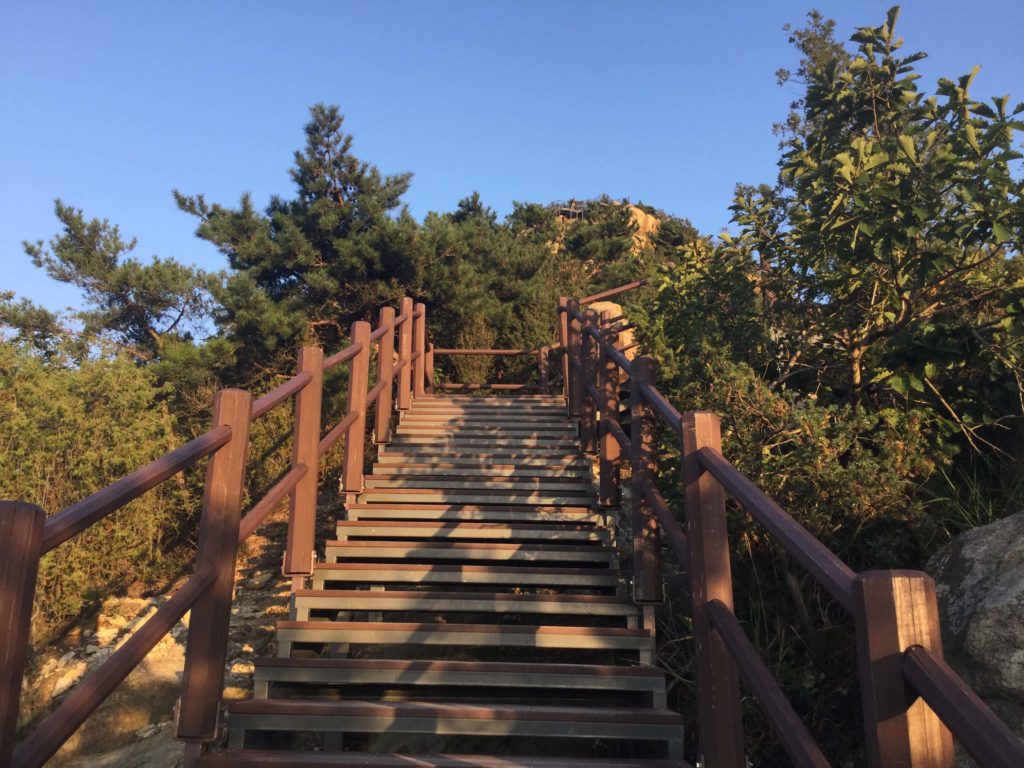 You still walk up a short section of stone after the wooden steps, and then you reach the older metal steps.

Just after the steps there’s a nice rest area with views on all sides from a prominent point on the ridge. This rest area makes a good goal for a shorter hike if you don’t have time to go all the way up but you want to get up above the city for the views, or if you’re mostly looking for somewhere to take some photos from. I’ve often hiked from Sadang station up to this rest area and then back down the same way.

These next 3 photos are from the rest area, including your first view of the summit ahead: 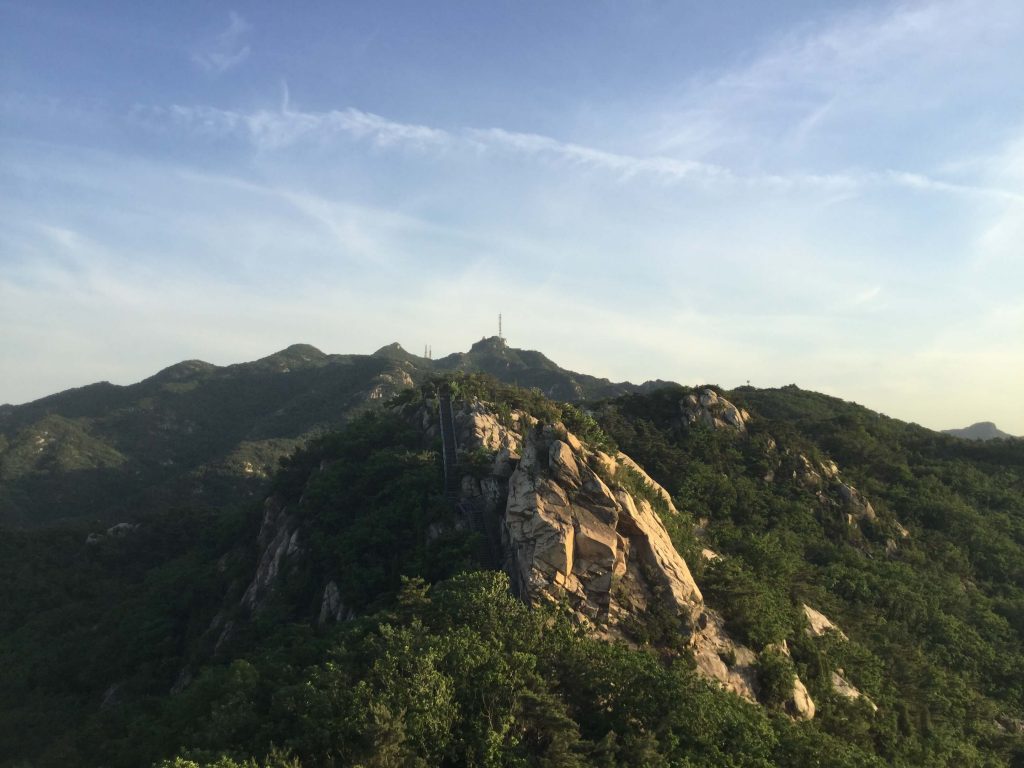 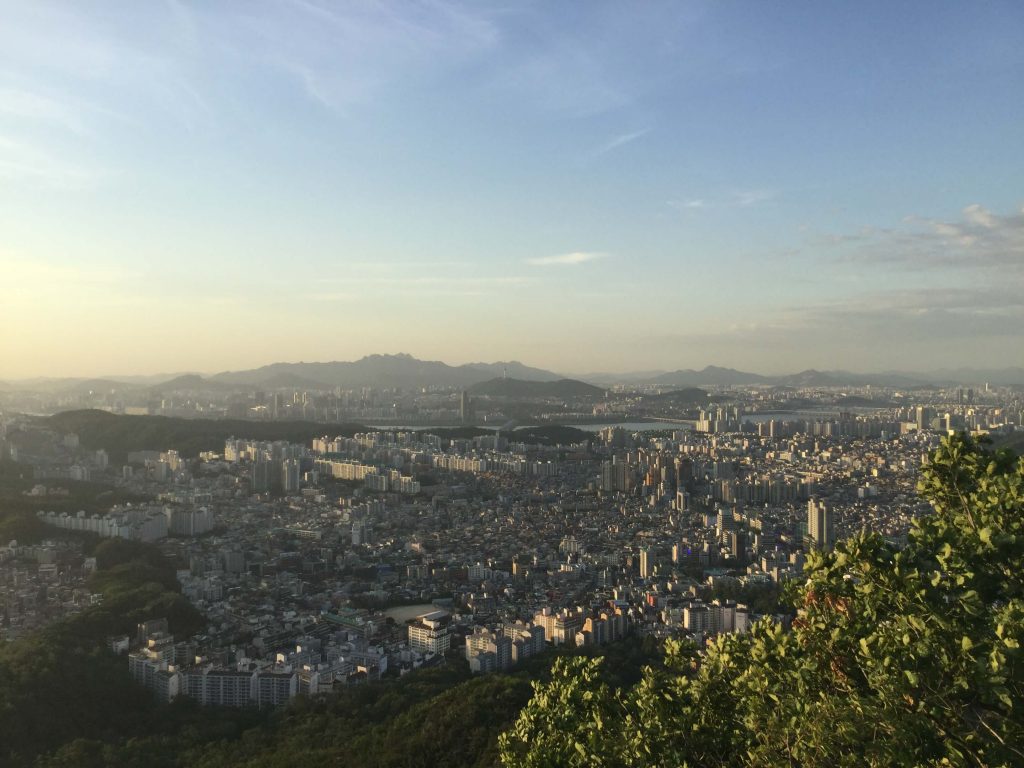 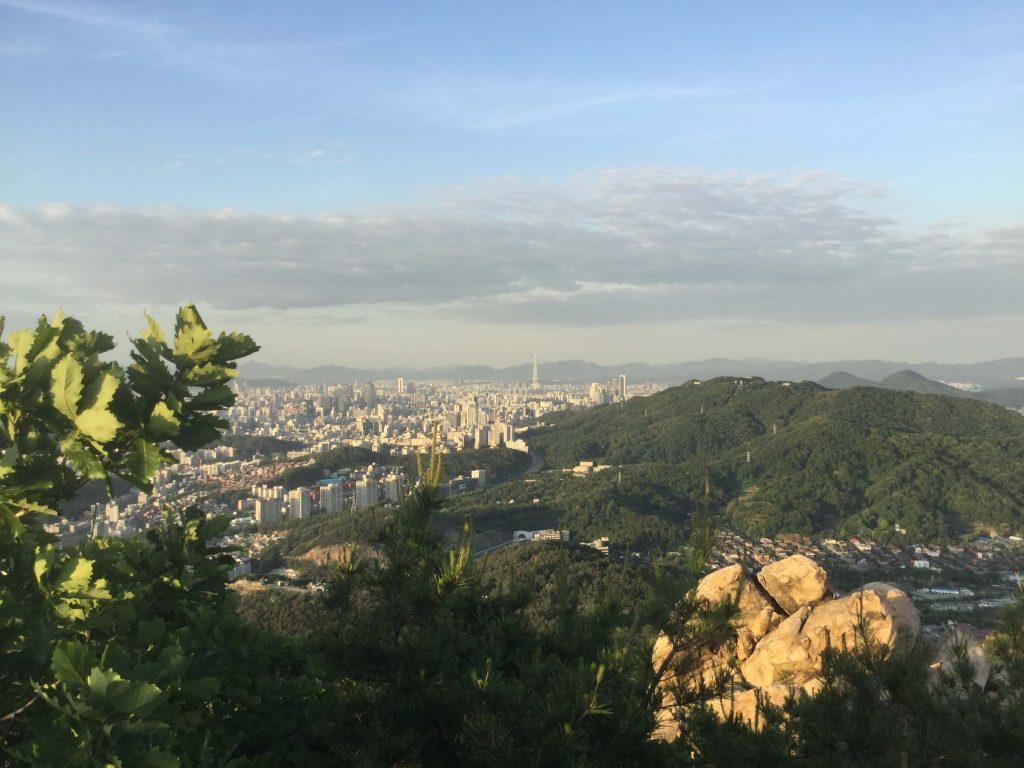 From there it’s up & down along the ridge, with more outstanding views as you go. Be prepared for some rock scrambling on the final summit section; some of it involves pulling yourself up using fixed ropes. 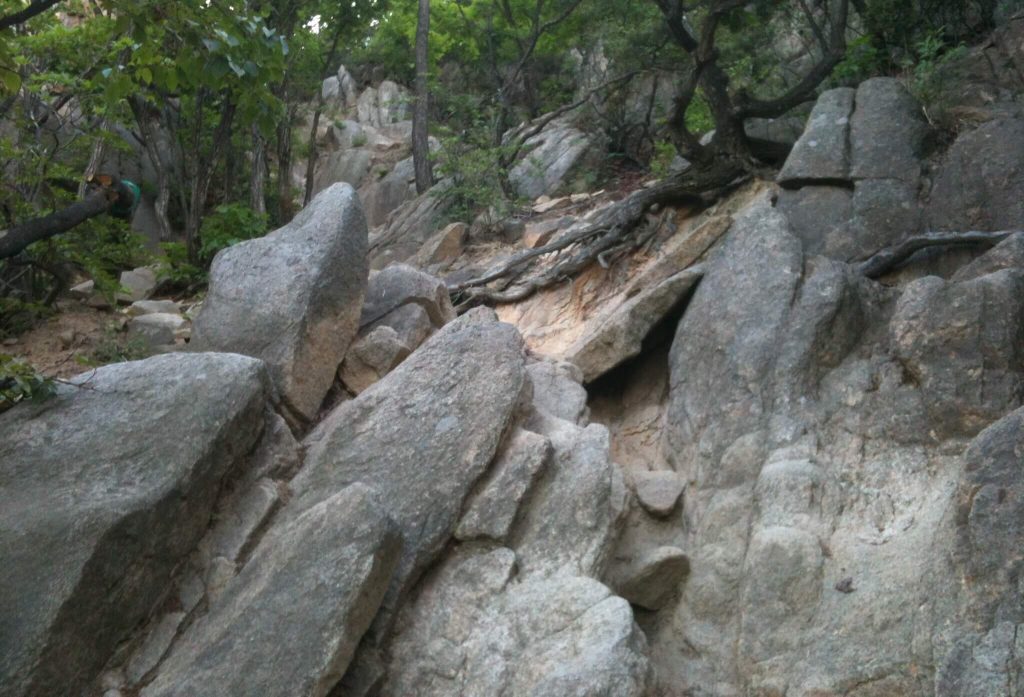 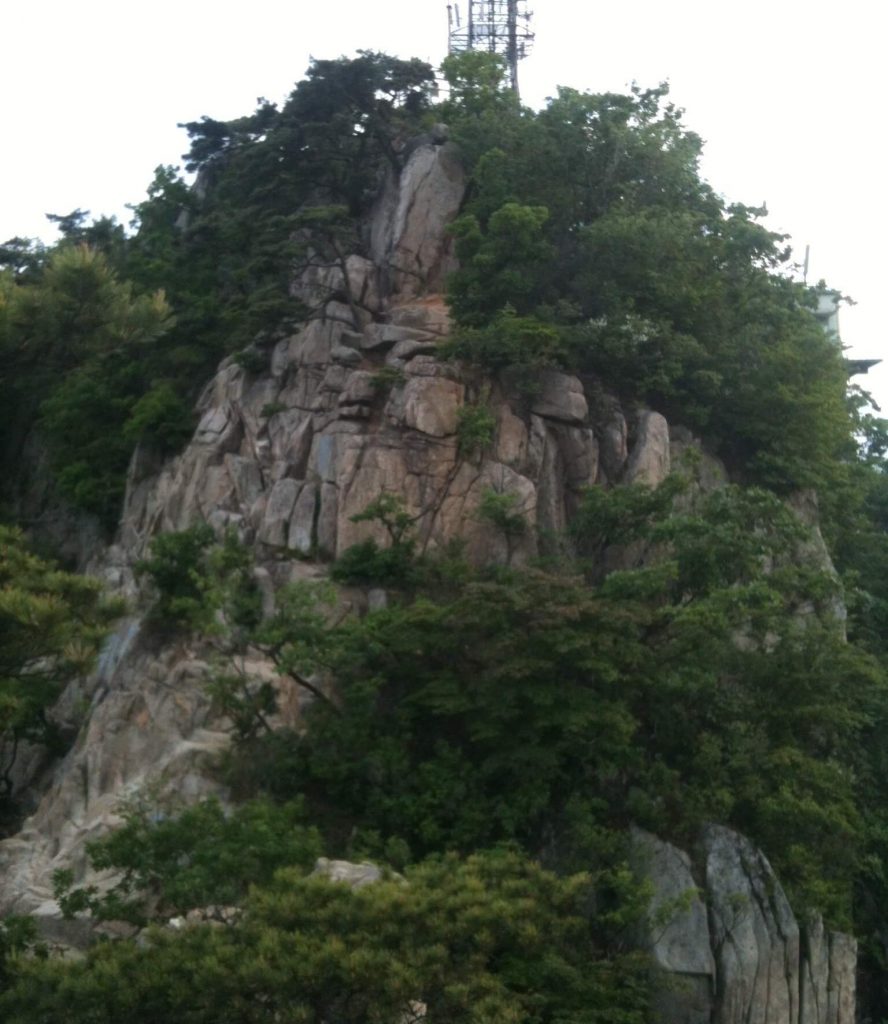 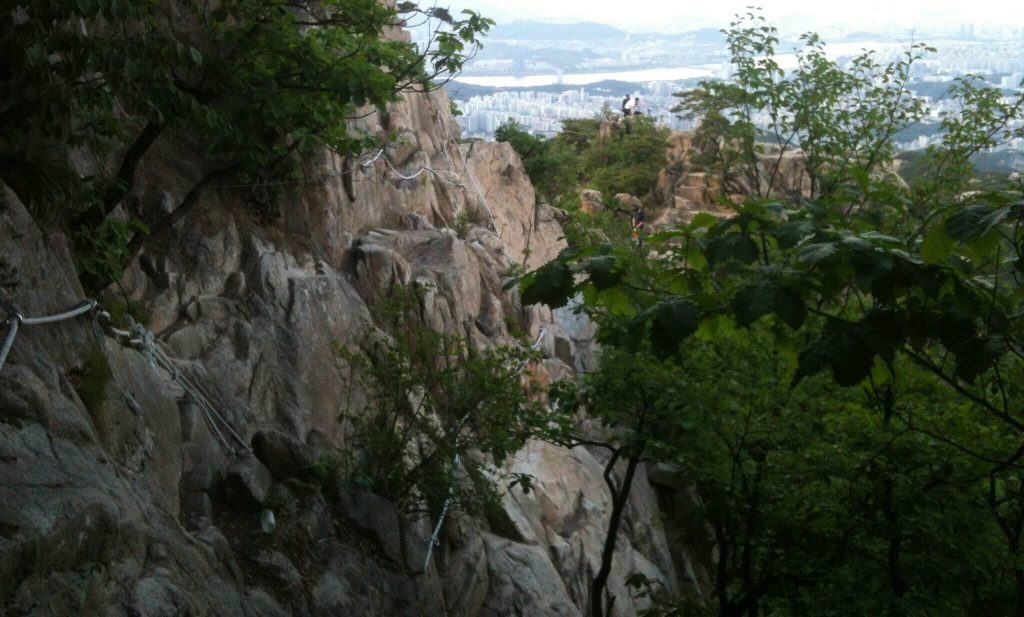 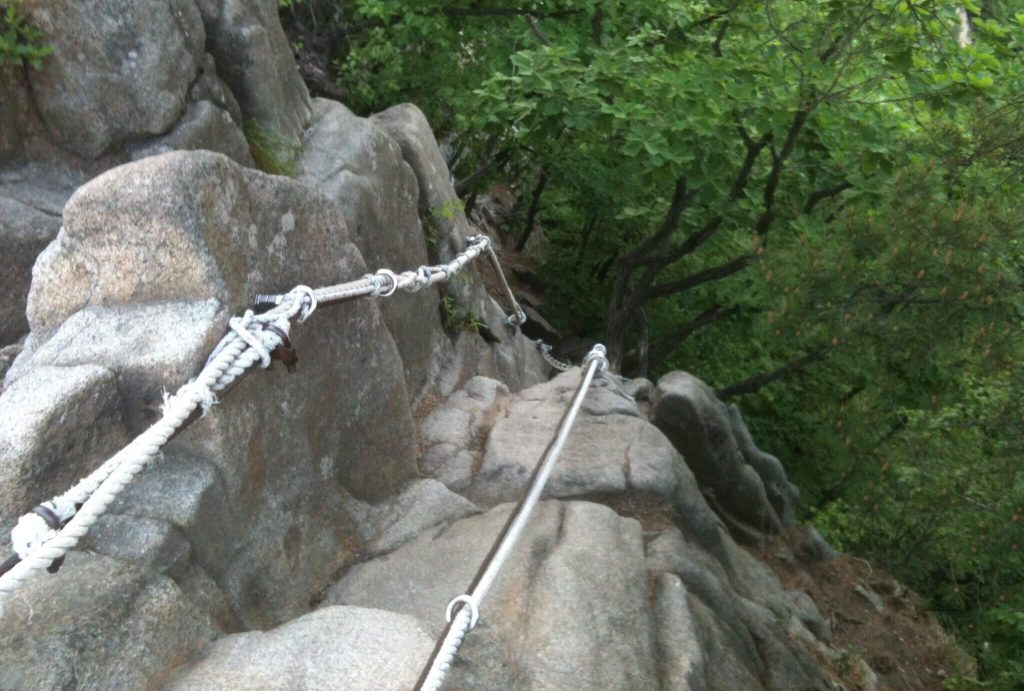 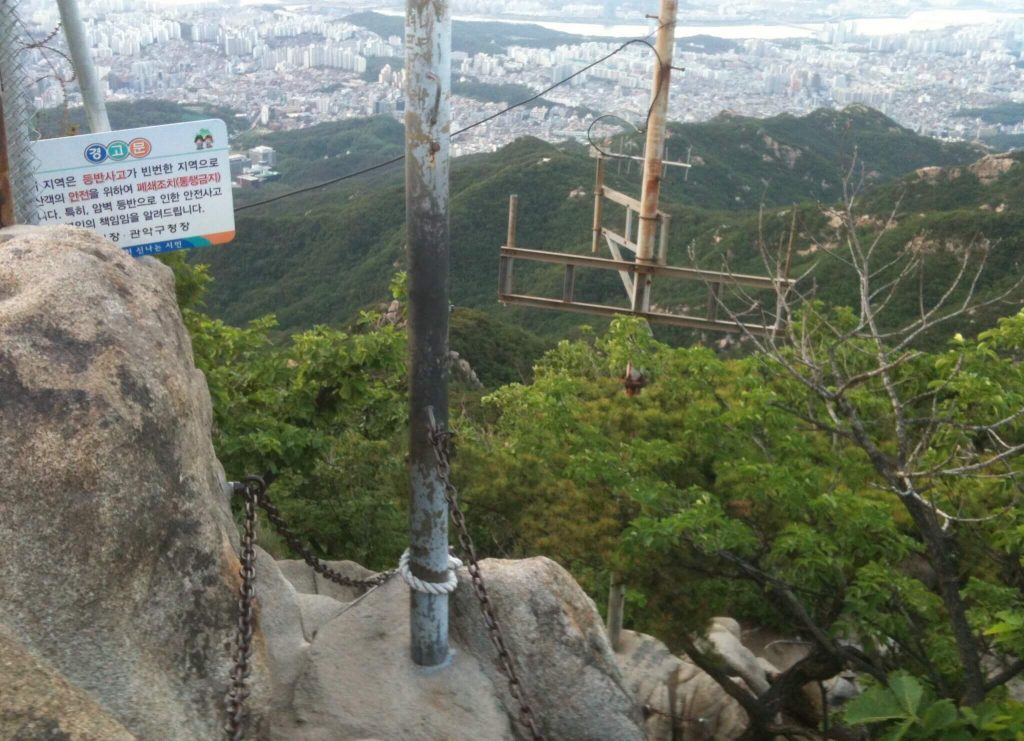 It’s good fun, but won’t be for everyone – if that’s you, hike up from SNU or Gwacheon instead!

To get to the start of the trail, ride the Seoul Metro to SNU Station on Line 2 and take exit 3, and then jump on a bus at the stop there. At time of writing you can take bus numbers 5511, 5513, 5515A, 5515B, 5520, or 5528; this could of course change, so the main thing to check is that the destination of the bus is Seoul National University Entrance (서울대입구, Seoul-dae-ibku). You can also walk, which takes about 20 minutes; if walking take exit 2 then just follow the main road (Gwanak-ro) south up and over the hill to SNU.

This big modern gate on the left is the university entrance: 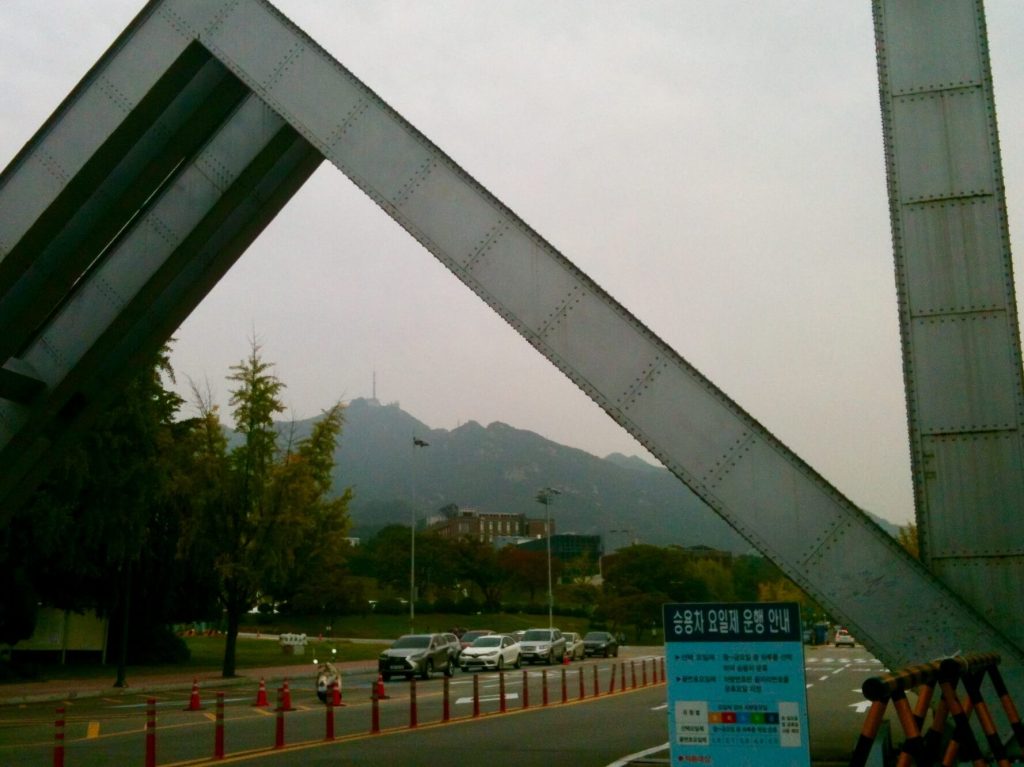 The Gwanaksan trail is a short distance beyond that, also on the left, marked with this big traditional gate: 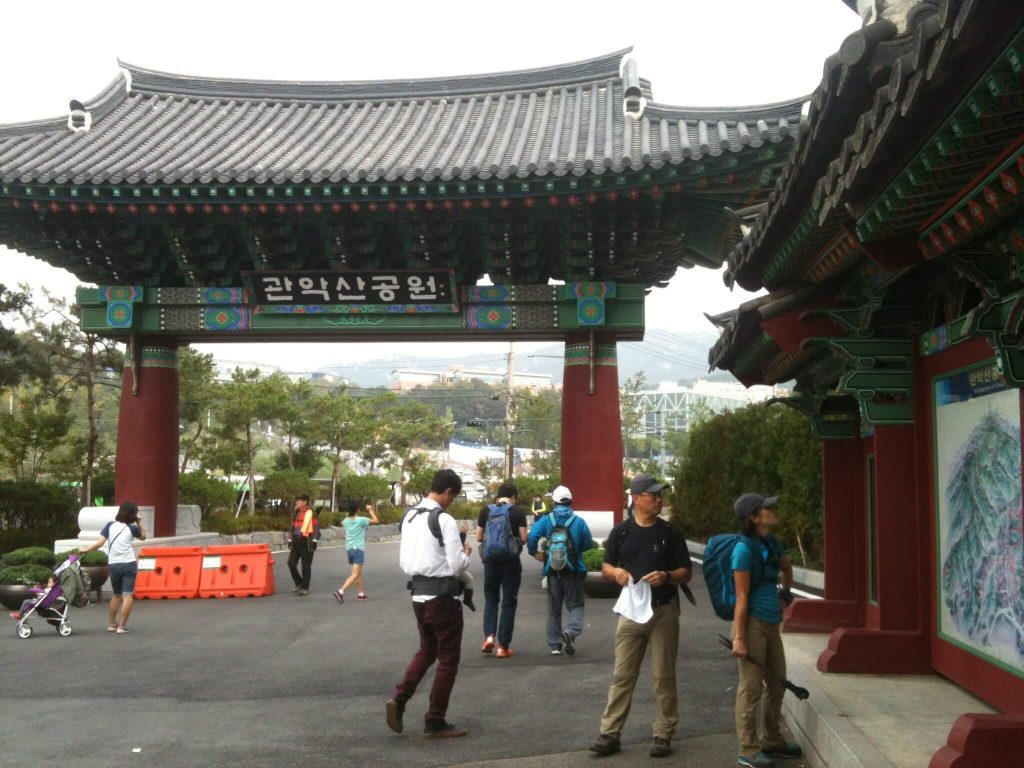 There’s a map there to the side, and you can easily find your way up the trail; the lower part is fully paved, then it becomes more of a mountain trail further up but with the wooden walkways and flights of steps in places it’s fairly easy going. You’re hiking up through the forest, so you don’t catch much in the way of views until you get to the top. After two hours or so you reach an intersection on the summit ridge (often manned by a vendor selling makgeolli, a fermented rice drink favoured by older Korean hikers – some like to sit and get quite pissed up!); turning right leads over to the radio facility, turning left leads directly along the ridge to the radar golf ball, and going straight ahead leads down to Yeonjuam Hermitage. The ridge is a fun bit of rock scrambling, but if you don’t fancy that go to Yeonjuam first, and from there there’s an easier path up to Yeonjudae and the golf ball.

If you’ve come up another way and want to descend to SNU, from Yeonjuam walk up to the ridge and SNU is signposted from the trail intersection.

To descend to Gwacheon, head down to the main Yeonjuam temple building and then take the path down the mountain from there; from Yeonjuam start by following the signs for 화장실 (which means toilet), then keep going down the path past the toilets and following further signs to 과천 (Gwacheon). 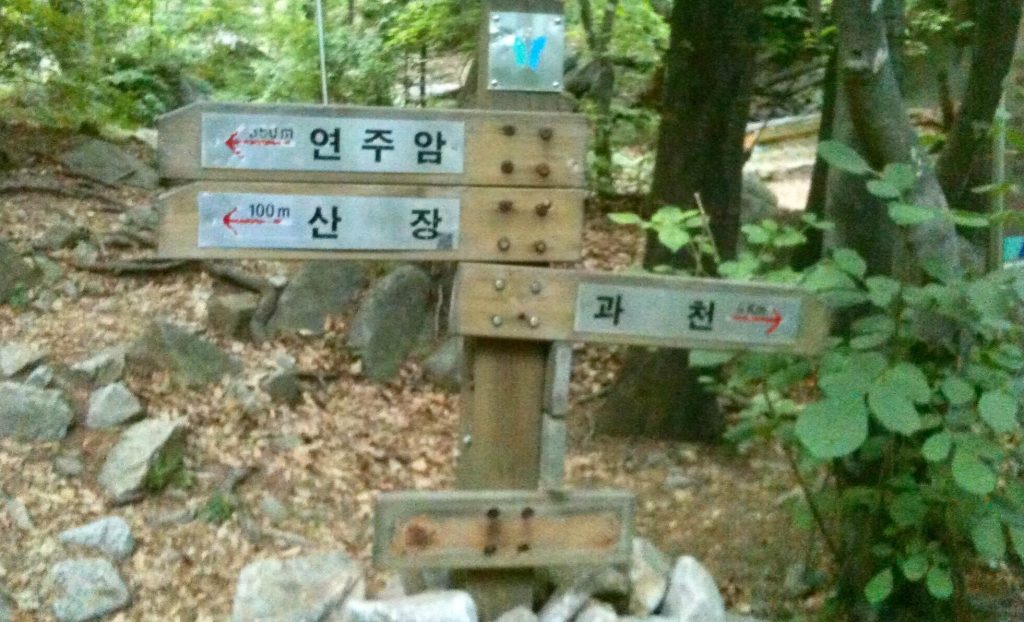 Like the SNU route, it’s an easy and well-maintained trail through the shelter of the forest. When you reach the road at the bottom, turn left and then after a couple hundred metres turn right on the pedestrian street through the residential area to the station.

If you want to do the hike the opposite way and ascend from Gwacheon, take exit 7 from Gwacheon Station and walk straight along the path past some residential blocks.

The path goes under one road and then ends at another (Gwanaksan-gil); turn left along the road and then a short distance along you’ll come to a park on the right where a stream comes down the mountain: 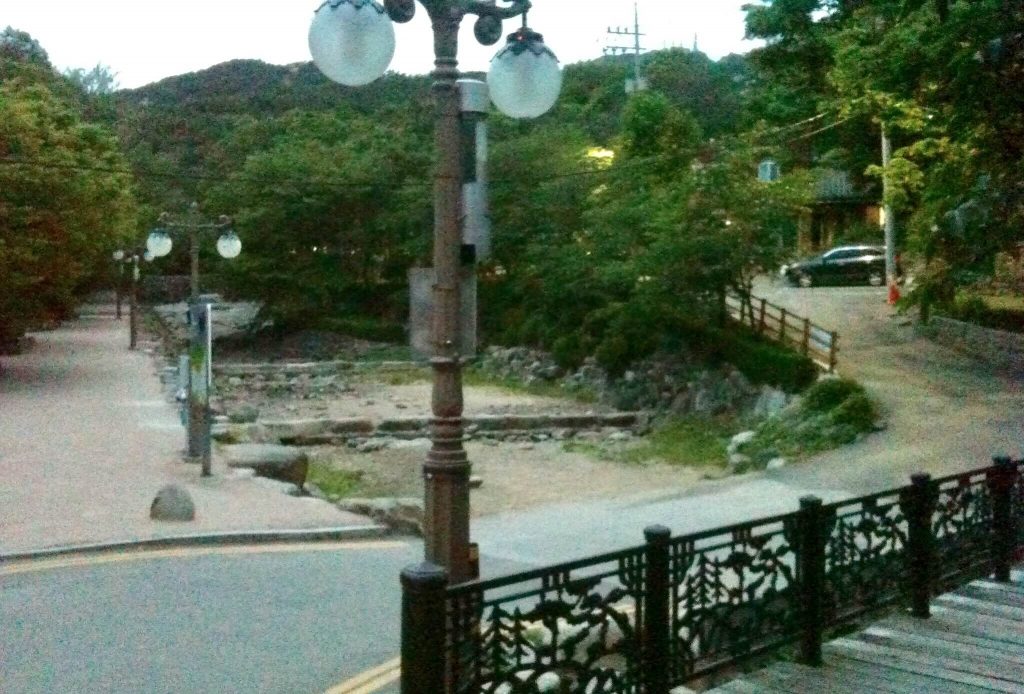 Cross over the bridge to walk up the right bank of the stream, past a bunch of restaurants and the lower cable car station; just past the cable car station you come to some steps on the right, which is the start of the trail: 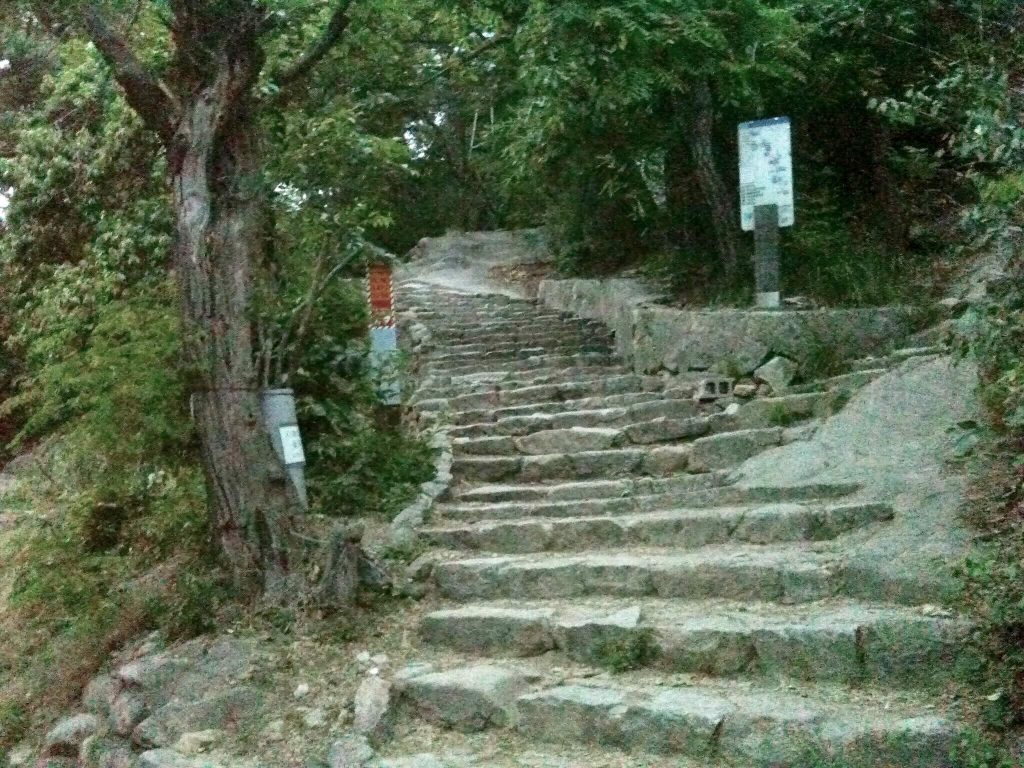 Have you climbed Gwanaksan? How was it? Any questions? Leave a comment below and I’ll get back to you.