Last month I had the pleasure of being in Seoul during the spring cherry blossom season; it’s a sight I’ve seen many times in Japan, so this year it was cool to check out the most famous cherry blossom spots in the capital of Korea.

The Japanese practice of hanami (sitting under the blossoms all day getting drunk) doesn’t really have an equivalent in Korea; it’s more about going sightseeing or taking a walk (cameras, smartphones and selfie sticks constantly at the ready) somewhere with lots of cherry trees. The most famous spots are:

This artificial lake lies in the shadow of the recently constructed Lotte World Tower (the world’s 5th tallest building and the chunkier cousin of London’s Shard) near Jamsil Station, and is the setting for the Lotte World Magic Island theme park, an ersatz fairytale castle riddled with rollercoasters that rises up from the waters like a poor man’s Disneyland. 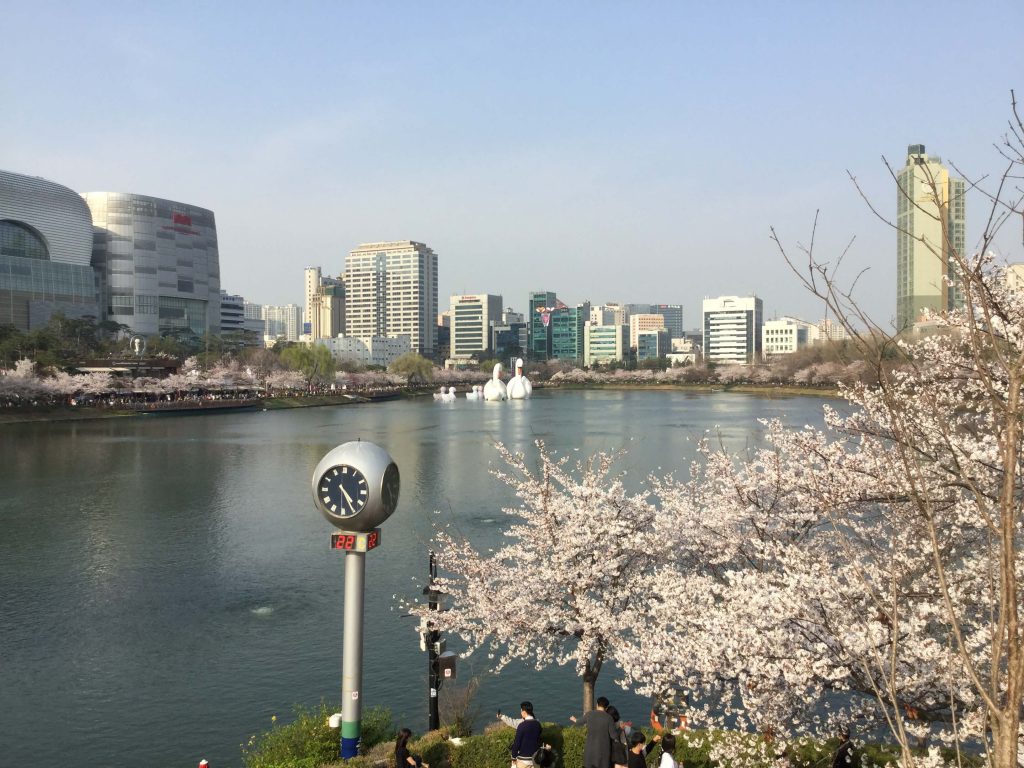 It’s also the city’s most popular cherry blossom spot (along with Yeouido, see below), with cherry trees around almost the entire circumference of the lake. It’s a spectacular site when they hit full bloom, and Seoulites come out in droves to take selfies under them. 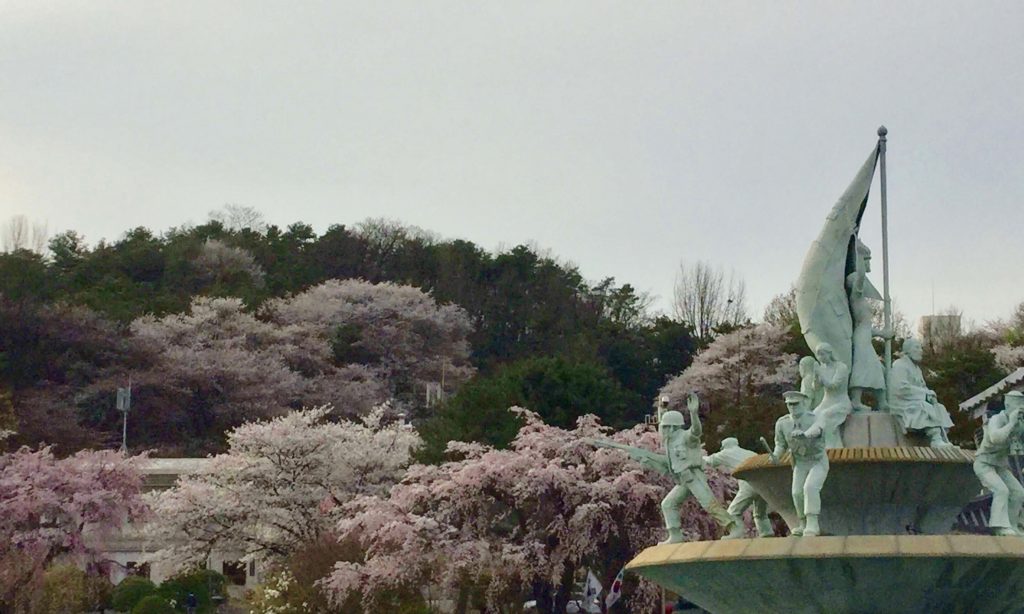 My personal favourite, as the crowds aren’t too bad, the blossoms are beautiful (consisting largely of weeping cherry varieties), and the cemetery itself is a lovely spot in its own right. As a memorial to Korean soldiers who died in the struggle for independence and the subsequent Korean War it remains a calm and peaceful place even when busy with blossom-viewers.

There are five palaces in Seoul, three of which are good places to combine some sightseeing with your cherry blossom viewing.

Gyeongbokgung is the most important of the palace sites, and though it doesn’t have a huge number of cherry trees they’re well-placed for photography. Changgyeonggung has extensive grounds and gardens, and plenty of blossom trees are scattered throughout; the pond at the north end of the grounds is particularly nice. Deoksugung is quite a compact palace, but has the densest concentration of cherry blossom trees so is also a good call.

The other two palaces – Gyeonghuigung and Changdeokgung – do also have a few cherry trees, but in smaller numbers and less photogenically placed; that said, Changdeokgung is directly next to Changgyeonggung so you may as well visit them both at the same time anyway.

Namsan is the small mountain smack in the middle of Seoul, with the city’s main landmark N Seoul Tower on its summit. Cherry trees are dotted around the mountainside, and if you’ve just missed the blossoms at the other spots downtown you should head to Namsan. 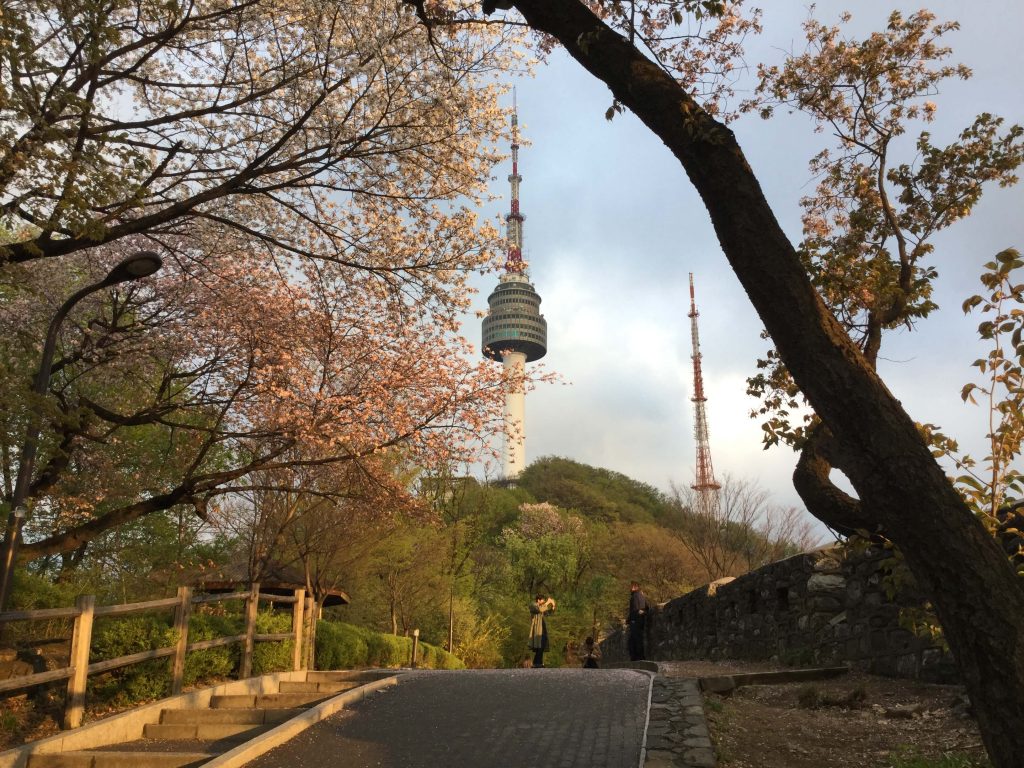 The cherry trees are scattered around in ones and twos so you don’t see any dense concentrations of blossoms, but this is more than adequately compensated for by the cracking views of the city below and the larger mountains in the distance: 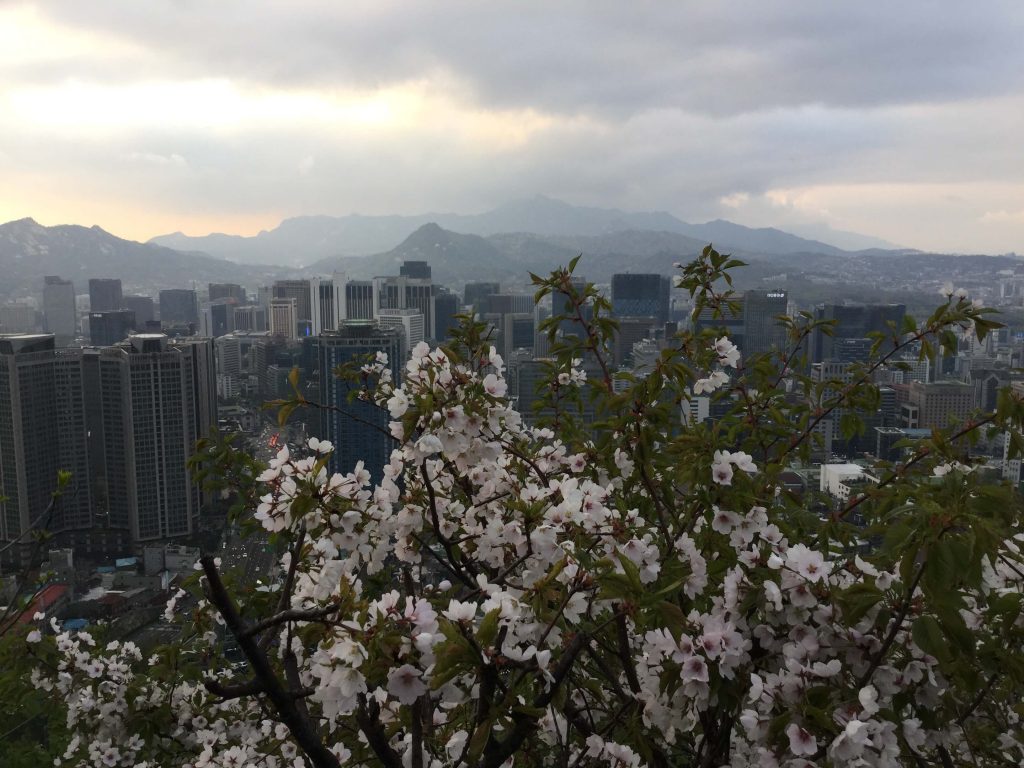 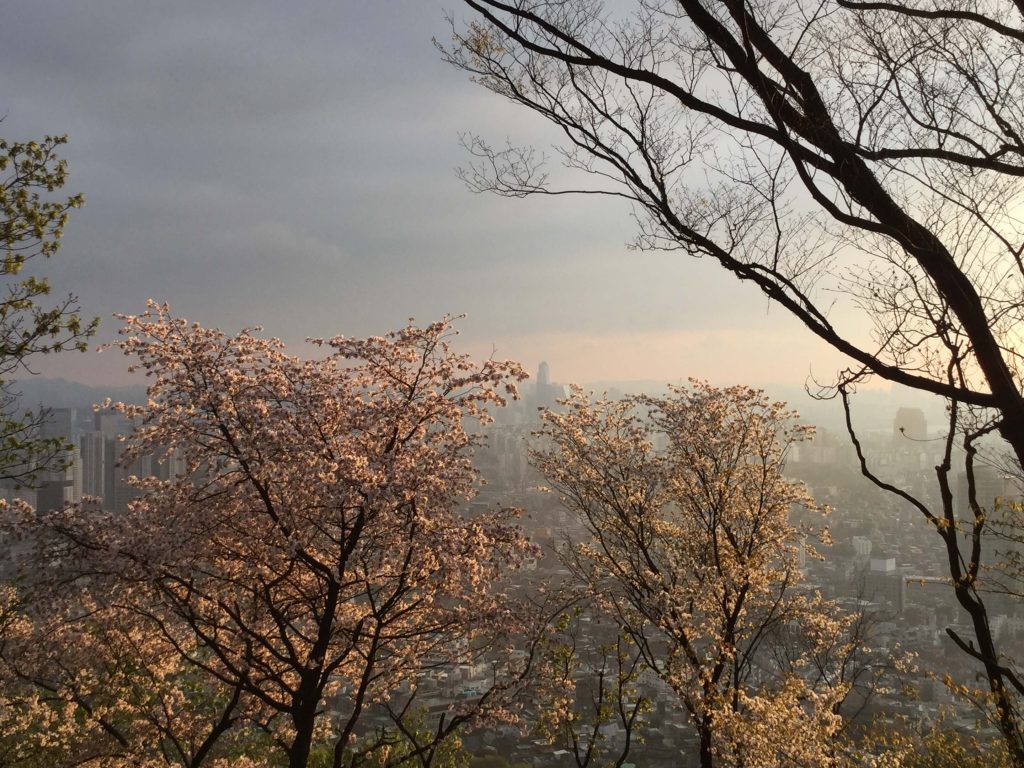 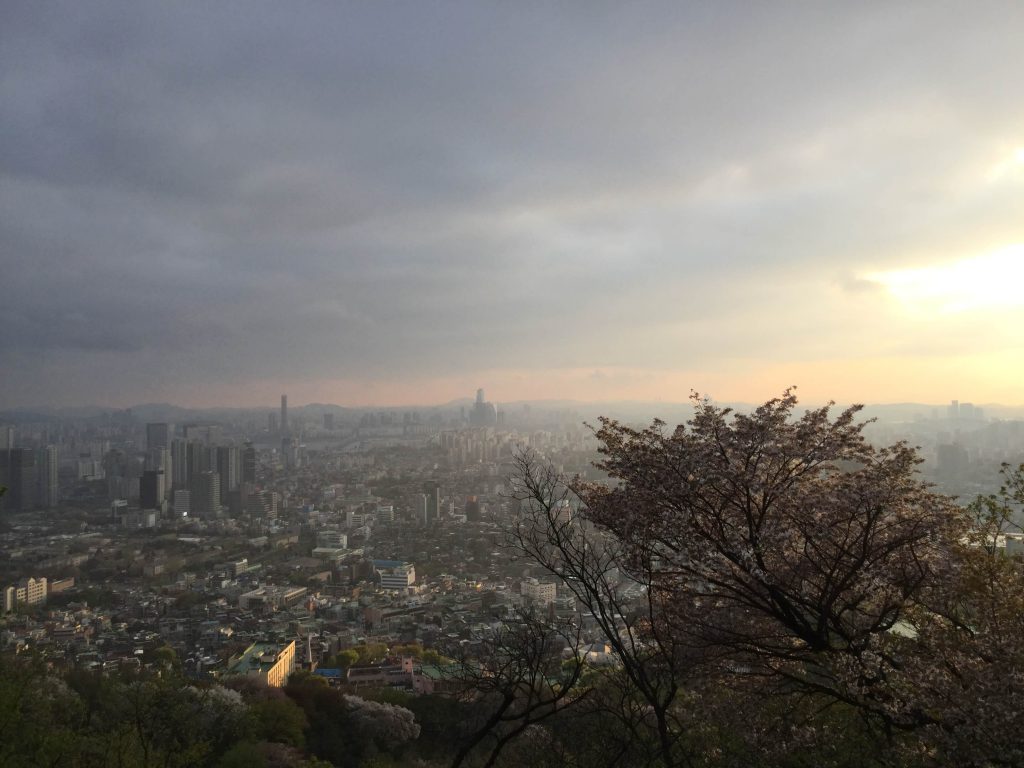 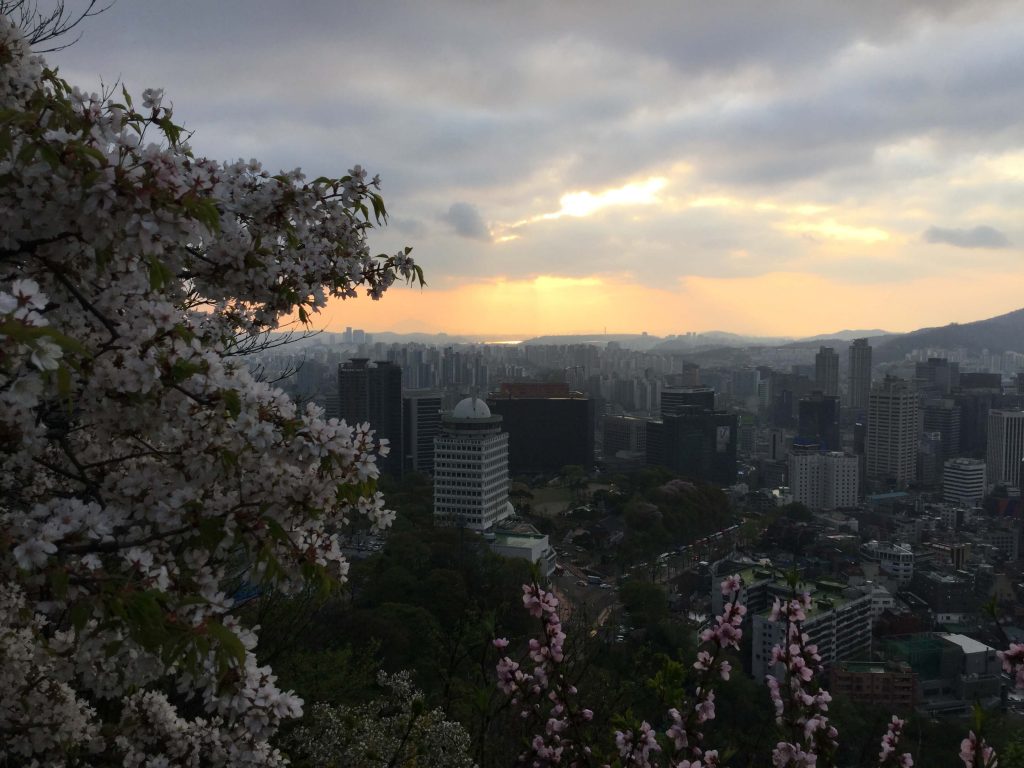 How to hike up Namsan 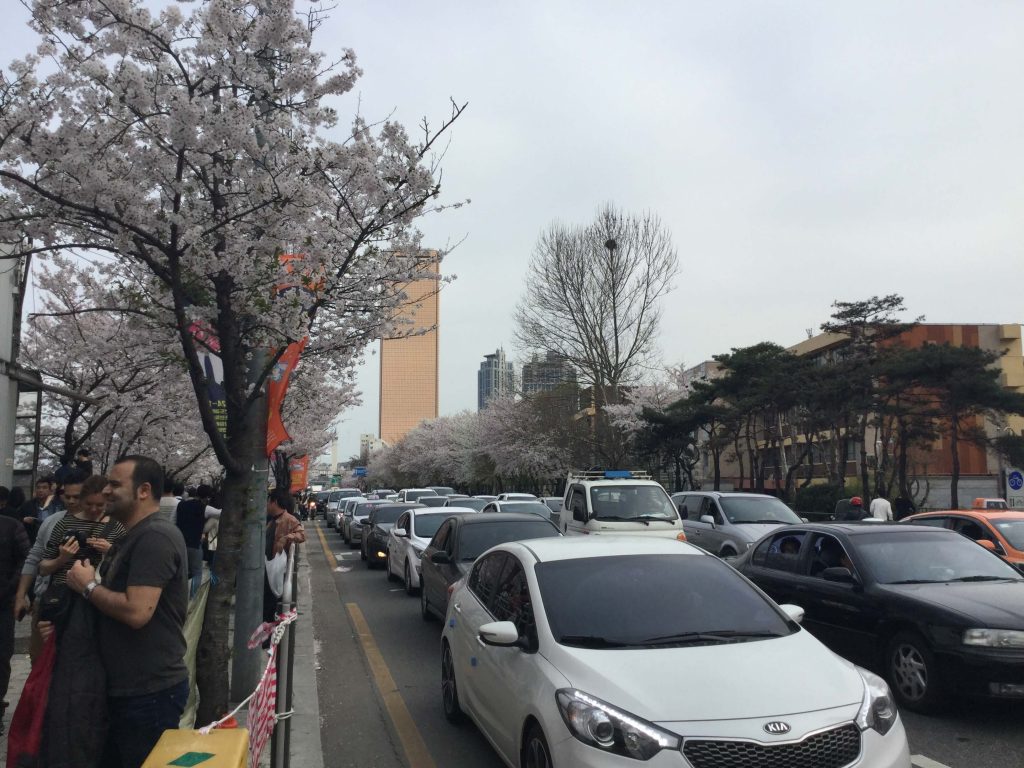 This is, unfathomably, the most famous cherry blossom spot in Seoul along with Seokchon – it was by far the least enjoyable and least attractive spot I visited! There are a lot of cherry blossom trees there to be sure, but they’re mostly lining the main road outside Yeouinaru Station; personally I don’t find concrete and cars to be the best backdrop for cherry blossoms! 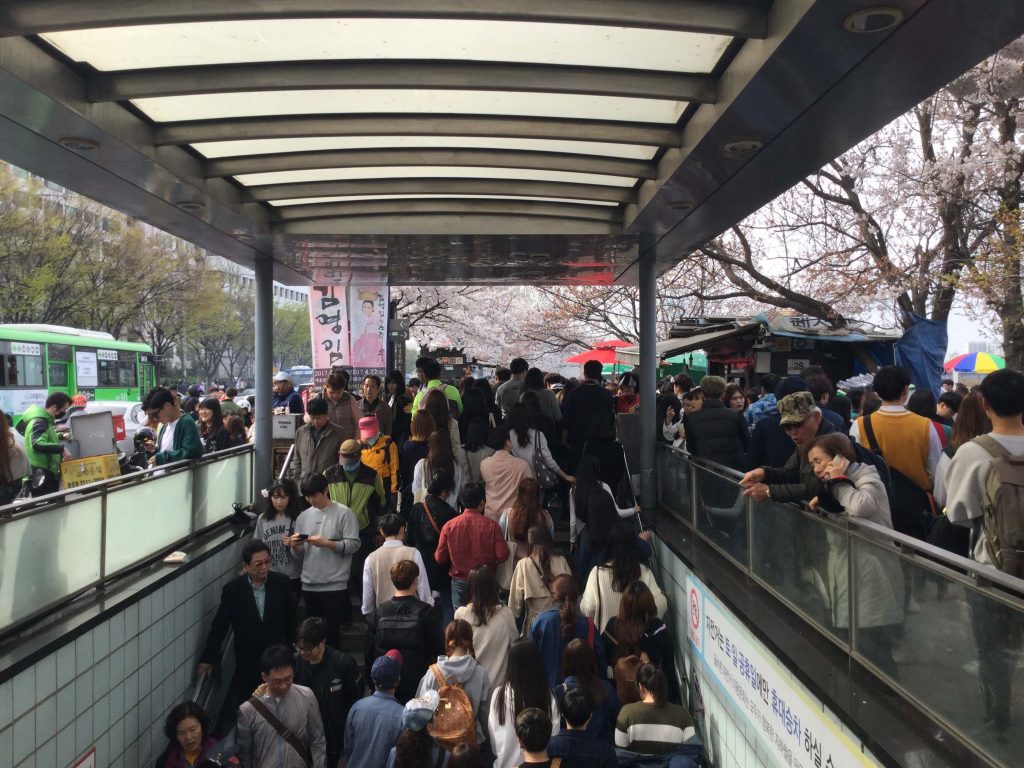 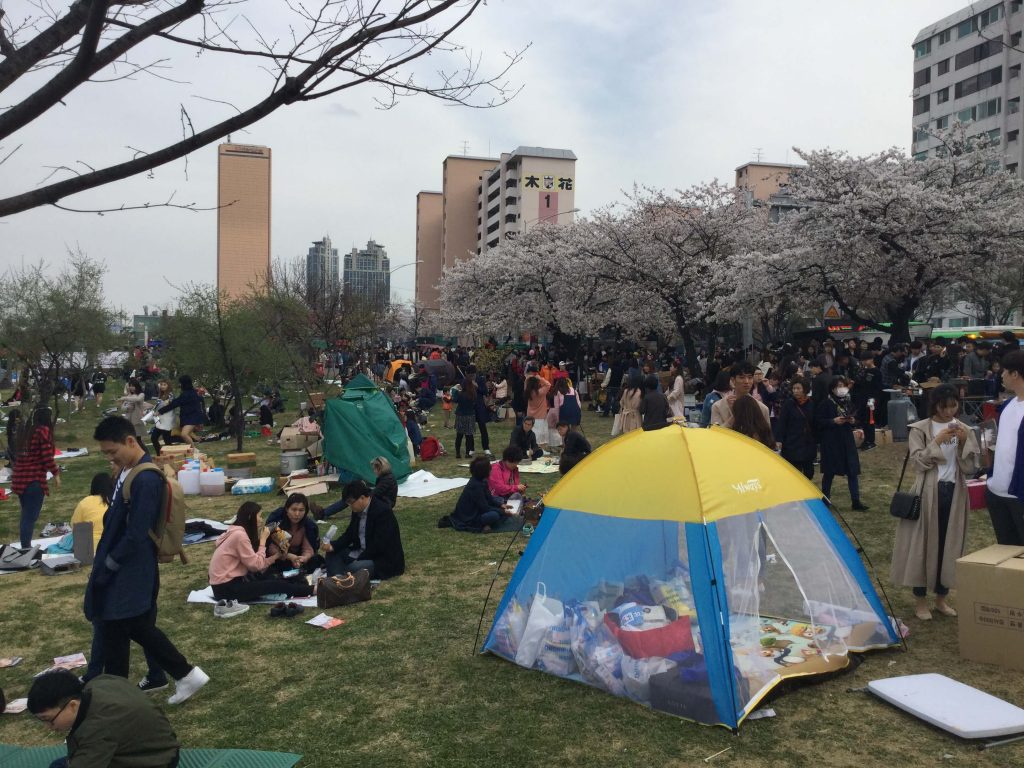 Furthermore the crowds are absolutely ridiculous (partially my fault for foolishly going on a Sunday), but if you’re looking for something like a Japanese-style hanami place then it’s here, as the area holds a cherry blossom festival (which I suppose is what draws the crowds) replete with food and drinks stalls selling all manner of street snacks, coffees, and alcoholic drinks for you to enjoy – if you ever manage to battle your way out of the station! People take their tents along and get settled in for the day, giving it an odd music-festival-without-the-music vibe; didn’t look much fun to me, but I suppose it probably would be with a good crew and a tent full of beer.

(Pro tip: avoid Yeouinaru Station, and instead stroll over from Yeouido Station. Actually: if you’re not after a drinking session, go to one of the other spots instead!)

Other places to see cherry blossoms in Seoul

There are plenty of random little parks and hills around the city which have cherry blossom trees, and you’ll find the odd street here and there lined with them, like this one near Hongdae: 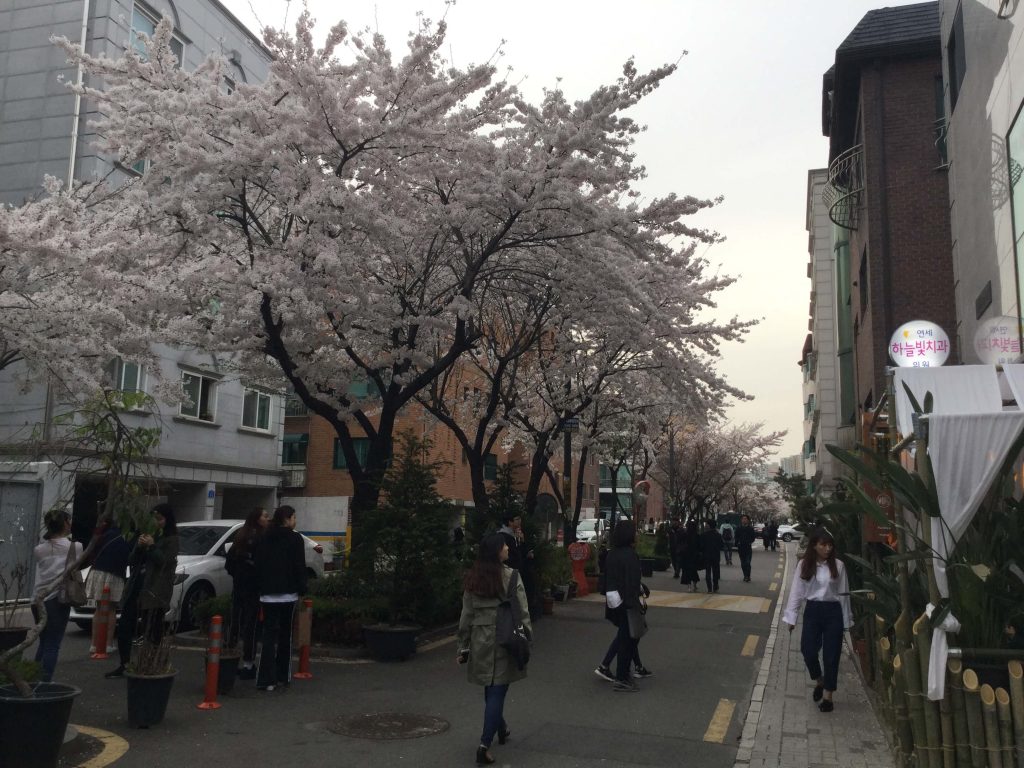 The Dongdaemun Design Park isn’t exactly renowned as a cherry blossom spot, but there are a few trees on the grounds and the futuristic architecture would make a good photography backdrop (I clocked them before they were fully open, but failed to get back there for photos during full bloom).

I also scoped out Cheonggyecheon stream, but nice as it is it doesn’t really have any cherry blossoms.

Have you been in Seoul during the cherry blossom season? How was it? Any questions? Leave me a comment below!

(Search for hotel deals in Seoul*. Also check out my guides to the best cherry blossoms spots in Kyoto and Tokyo, and see my Korea overland travel guide. For more Korea posts see here)

*Affiliate link i.e. if you follow the link to Hotels Combined and make a reservation, 4corners7seas will receive a commission from them; this commission comes out of their profit margin at no extra cost to you. I only link to products and services I personally know and use; thank you in advance should you choose to support 4corners7seas by using this link