There really is no better time to visit Japan‘s capital than the first week of April; the days are warm, the evenings cool, and the sakura (cherry blossoms) bring the city to life in a 3-day burst of colour, booze, and an existential appreciation for the fleeting beauty of life. (For skiers it’s even better – you can spend the day riding in Yuzawa and be back in Tokyo in time for some evening hanami in the park!)

Here are my top 5 places in Tokyo to see the cherry blossoms:

The Imperial Palace moat and nearby Yasukuni Shrine are probably the most famous blossom spots in Tokyo; although they’re two different sites, their close proximity (just over the road from one another) makes them best visited together, and if I were to be in Tokyo again during the cherry blossom season with only one free afternoon, that’s where I’d go. 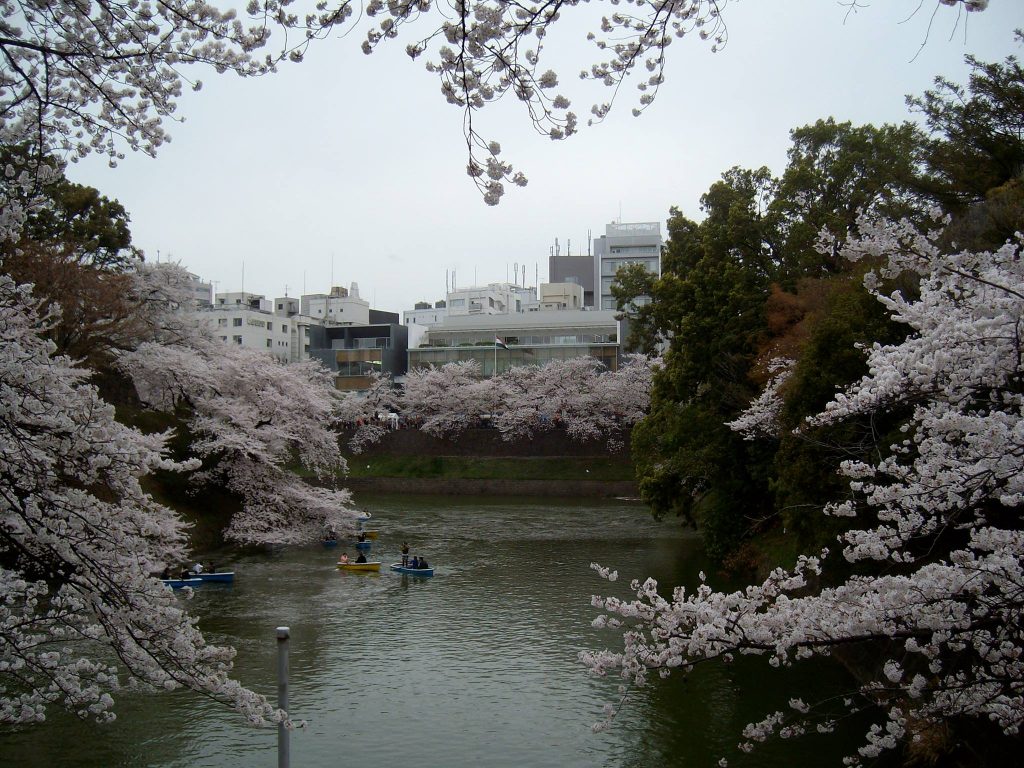 The palace moat is called Chidori-ga-fuchi in Japanese, and at full bloom the sakura trees massed along the sloped banks of the moat appear to be a frozen pink waterfall; couples rent out row boats to appreciate them from the water, and you can also take a stroll into the first section of the palace grounds.

Yasukuni Shrine may be mostly known internationally for the controversies surrounding the enshrined spirits of convicted war criminals and the revisionist history presented at the the attached Yushukan war museum, but Yasukuni is also one of the city’s best cherry blossom spots. Under the blossoms at Yasukuni was where Japanese soldiers promised to meet their fallen comrades again, and Tokyo’s official representative sakura tree is located at the shrine (this is the sakura tree whose progress the declaration of full bloom in Tokyo is judged by).

The shrine’s main approach is lined with street food stalls during the blossom season, so a stroll at the moat followed by lunch from the food stalls and then a stroll through Yasukuni (and perhaps a visit to the Yushukan) is an excellent half-day plan for seeing the sakura in Tokyo (but do be prepared for crowds). The blossoms are beautiful, street food is always a win, and the controversies and the museum add extra interest for those who like a bit of history & politics with their sightseeing.

The Sumida river flows past the edge of the traditional Asakusa district, the location of Tokyo’s most famous temple, Sensou-ji. The park along the riverbank near Asakusa station is chock-full of sakura trees, making it a popular spot for hanami picnics (they tend to be more family affairs in this park, rather than the rowdy booze-ups common elsewhere), and there are good views from the area of the Tokyo Skytree. It’s a great area to visit in spring as you can combine some Asakusa sightseeing and dining with cherry blossom viewing along the river (river cruises are also available, and another popular way to see the blossoms).

You won’t find the Shakujii River listed in any guidebooks, but it’s lined with cherry blossoms for some 14km from Toshima-en station to Oji station. I once ran the full 14km at full bloom, camera in hand; it was the slowest 14km I’ve ever run, stopping every few minutes to take pictures! Here are a few of them (I took absolutely loads): 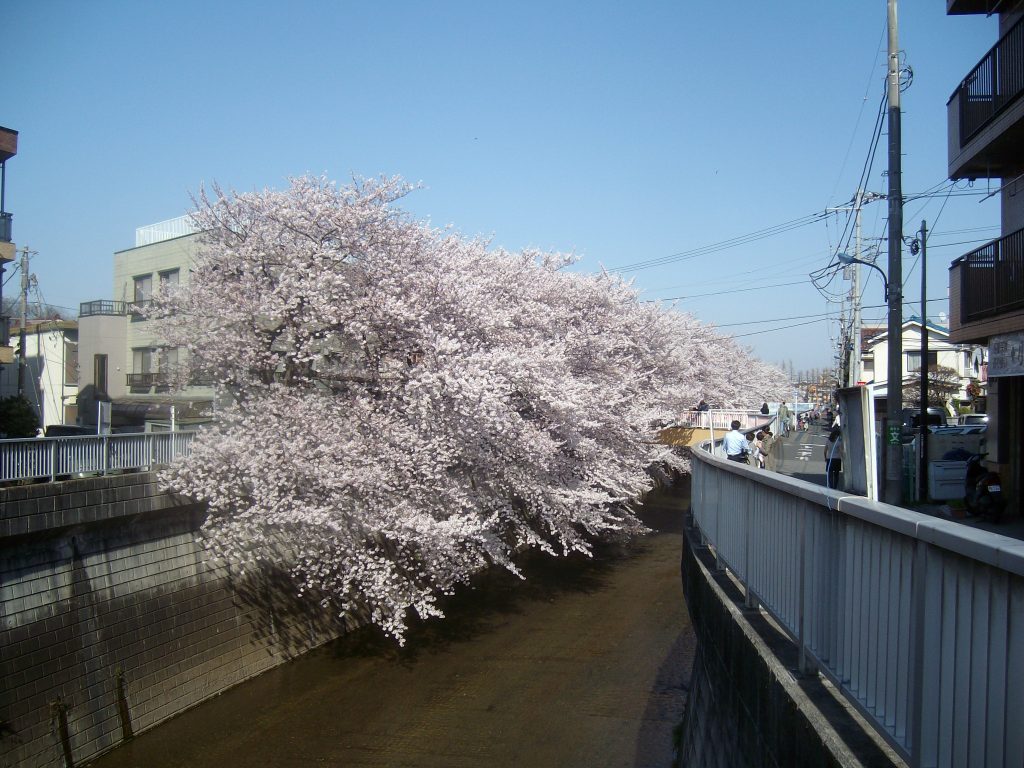 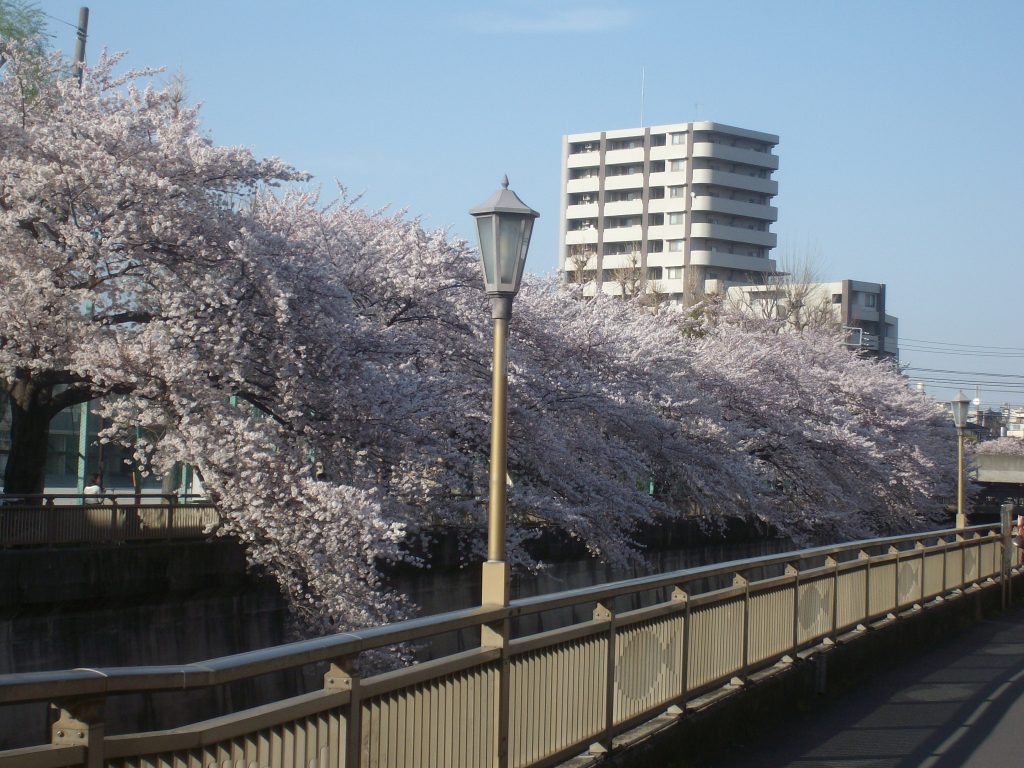 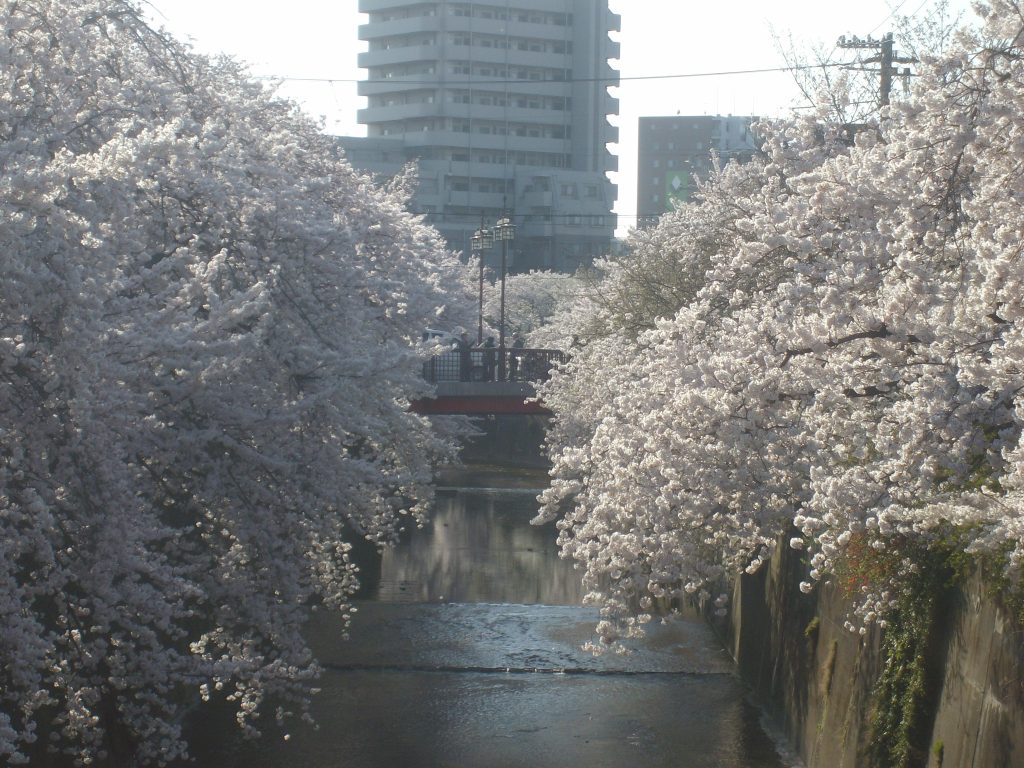 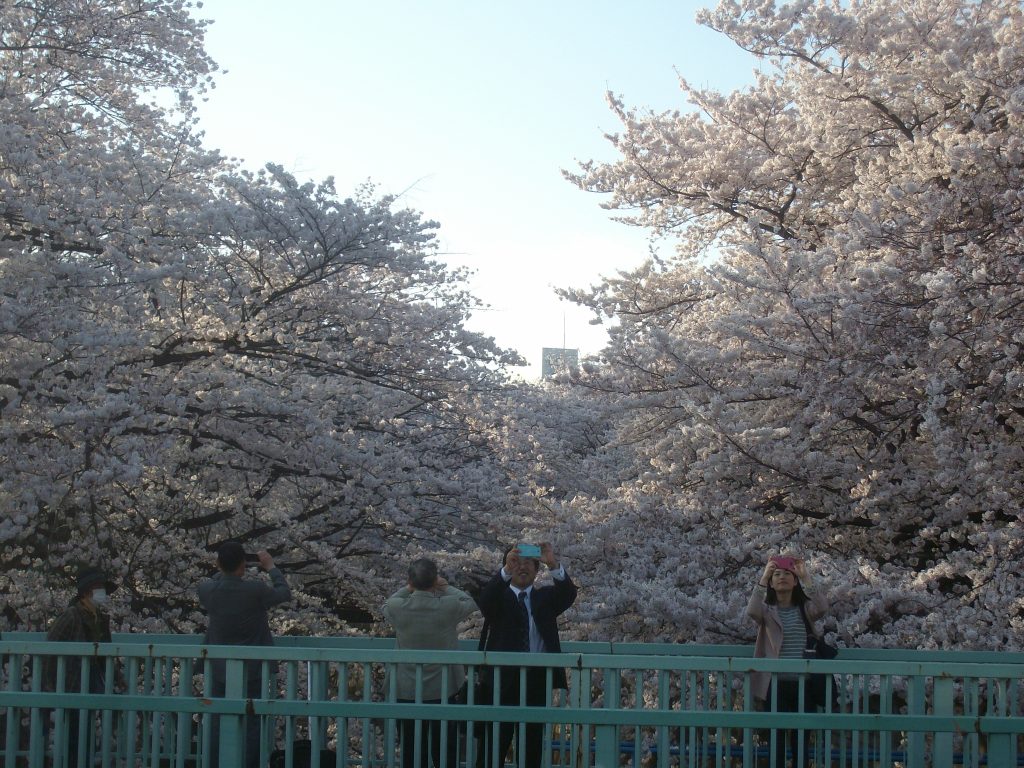 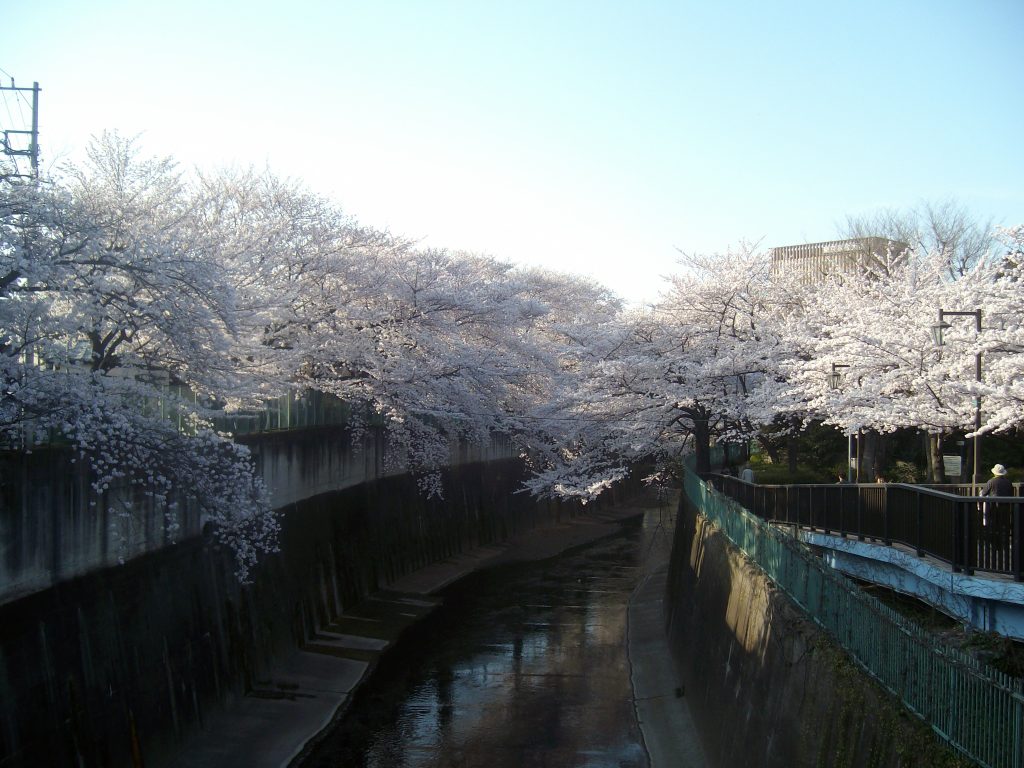 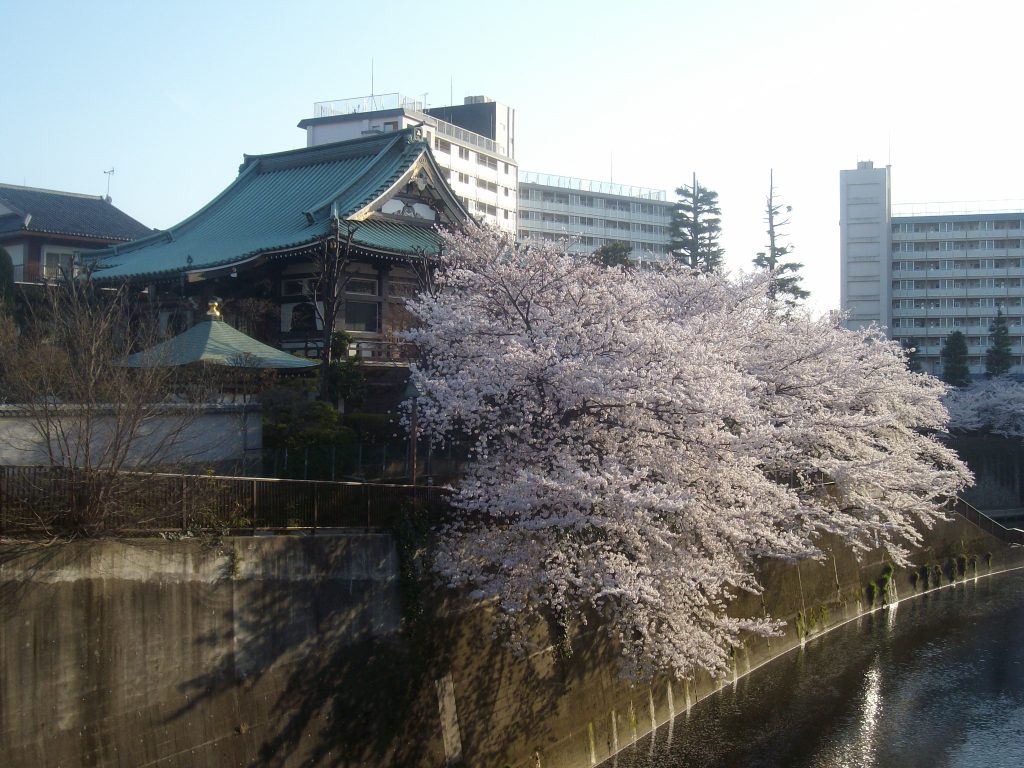 The crowds here are nowhere near as bad as at the famous cherry blossom sites; though there are still plenty of people out and about, the crowds consist of local families out for a stroll rather than camera-toting tourists, making it a nice way to catch a glimpse of life in suburban Tokyo. It might seem a bit out of the way, but it’s easy to reach and find from Naka-Itabashi station and Oji station; a walk between the two would be about 5 or 6km and a lovely way to spend a couple of hours (search for those two stations on Google Maps, and you’ll see the river running between them). 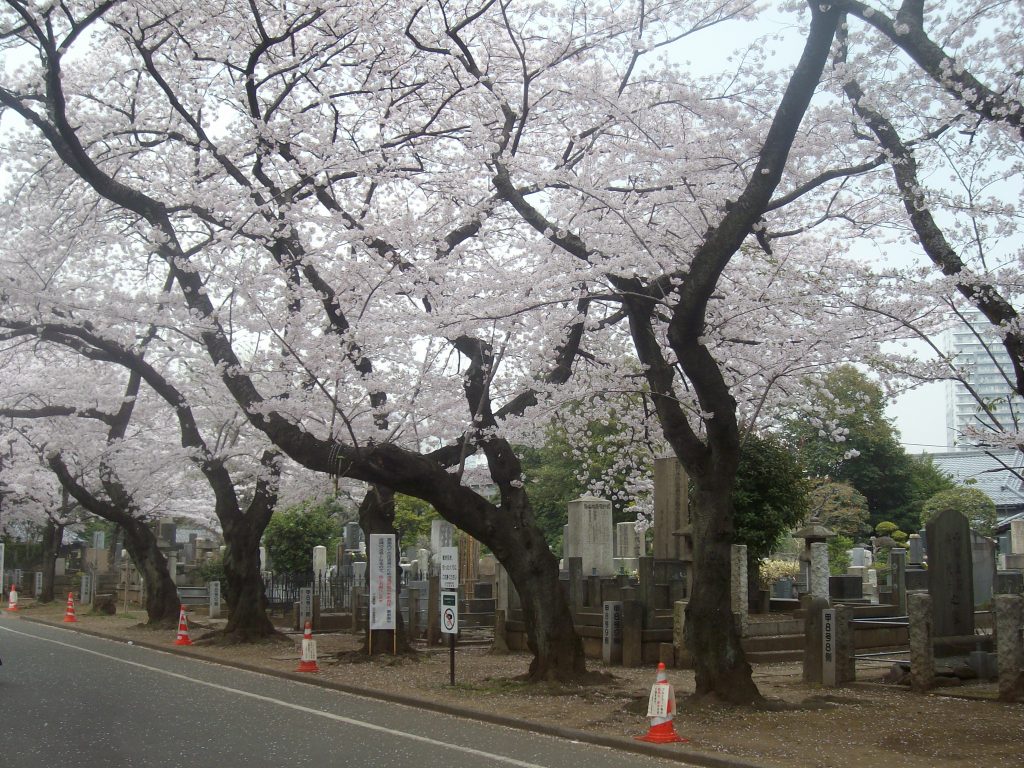 This large cemetery is a great place to see the cherry blossoms if you’re not a big fan of crowds. The peaceful surroundings are a far cry from the bedlam down the road in Ueno Park (see below), and a leisurely stroll past the impressive gravestones (some important people rest here, including the last Tokugawa shogun) is a pleasant way to see the blossoms. The cemetery is located just next to Nippori station, and it’s only about a 10-minute walk from the cemetery to Ueno Park so you can easily take in both sites by walking from Nippori station to Ueno station; the contrast between the crowds & atmosphere in the cemetery and the park is pretty extreme!

Ueno Park, central Tokyo’s largest park, is grand central for hanami parties – the practice of appreciating the blossoms by sitting out under them all day having a picnic and getting completely shitfaced. The ridiculous crowds make it a not-so-serene experience, but Ueno makes the top 5 for the opportunity to see Japanese salarymen rolling around like drunk teenagers, letting their hair down publicly in one of the few settings they are able to do so. Groups of blossom-viewers stake their spots out with blue tarpaulins early doors (junior office staff actually get sent to the park in the morning to claim and hold good spots), and your photos will be as notable for the hordes of people as they are for the blossoms themselves! 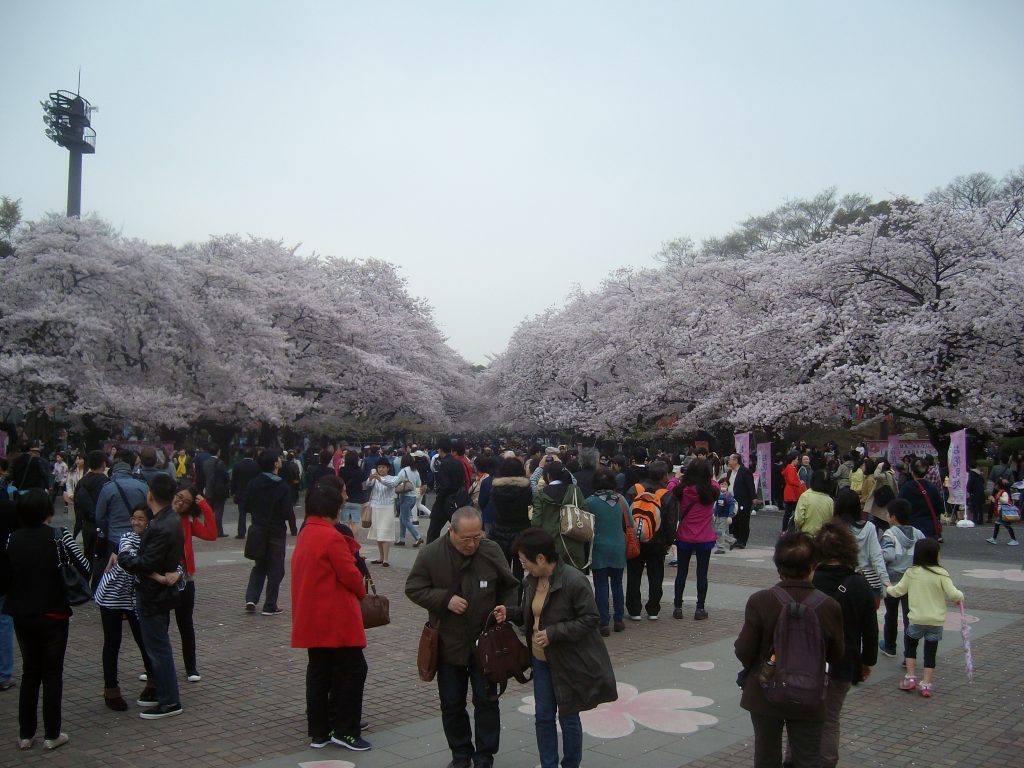 Other famous places for cherry blossoms in Tokyo

Other famous cherry blossom spots in Tokyo include Shinjuku Gyoen park, Meguro River, Yoyogi Park, and Inokashira Park near Kichijoji station (which is a great spot for a hanami party – it’s a youthful part of the city and the park is really lively in the evening).

As well as these, the cherry blossoms bring a burst of life to all sorts of random local corners of the city which you may just happen across if you go for a wander, with scenes like these:

Also, check out my top 6 cherry blossom spots in Kyoto, and the best places to see the autumn colours in Tokyo and Kyoto

Have you been lucky enough to catch the cherry blossoms in Tokyo, or do you have any questions? Leave a comment below and I’ll get back to you.

Heading to Japan? Click the banner to pre-order a JR Pass for a 40-dollar saving:

Is the JR Pass worth it? See here

More Tokyo posts here, and check out my quick guide to Tokyo; for more posts on Japan click here

(This page contains affiliate links i.e. if you follow the links from this page to Hotels Combined or Japan Rail Pass and make a purchase, 4corners7seas will receive a commission from them. This commission comes out of their profit margin at no extra cost to you, and thank you in advance should you choose to purchase anything via the above links!)