Located around two hours from Sapporo, Niseko ( ニセコ ) is Hokkaido’s most famous resort, and probably the most famous one in Japan. It’s sometimes referred to as Japan’s Whistler, although those who know both mountains will say there’s no contest – Whistler has more vert, more lifts, more runs, more parks, more pipes, more terrain, more nightlife, more everything… more everything except snow, that is! And in the snow department, Niseko wins hands down – it gets more snow (a whopping 15 metres annual snowfall), and the snow is better. None of that sticky wet coastal BC stuff, Niseko’s snow is the real deal; fluffy, light, and dry – exactly what you want under your board.

While Niseko may not compare favourably size-wise against Whistler, it is the biggest and best developed ski area in Hokkaido (though not the biggest in Japan – that honour goes to Shiga Kogen in Nagano on the main Honshu island, which I haven’t been to yet). Niseko is where all the gaijin (read: Aussie!) ski bums flock for the season, along with hordes of Aussie and Kiwi tourists escaping their summer for a week of powder. Its size isn’t necessarily a good thing as it gets much more crowded than other Hokkaido resorts and the powder actually gets tracked out by lunch. But, overall, Niseko is definitely considered the Top Dog of Hokkaido ski resorts and if you want to actually stay in resort while skiing Hokkaido (not possible at smaller places like Teine), Niseko is your best bet as it’s the closest thing to an Alpine mountain village you’ll find (though you could also consider Furano).

I only ever actually rode at Niseko three times – the first two were day trips while living in Sapporo, and the third was on a quick Hokkaido ski tour while I was living in Kyoto a few years later (a trip which turned out a little different than I’d planned, due to a cancelled ferry and a scissor-wielding lunatic). 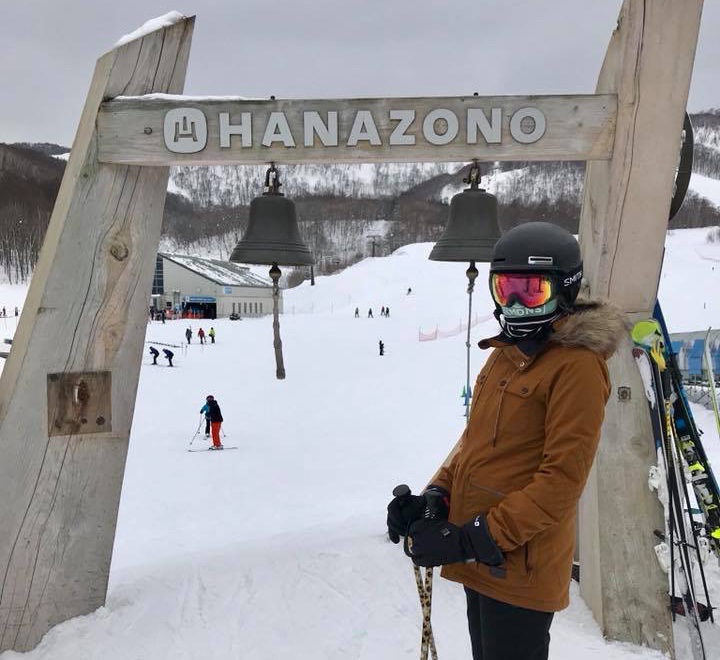 Unfortunately, the weather was poor to awful on each of those days, and I never had the chance to go right up to the top – bit of a problem when the ski resort consists of four linked areas, and the place they’re linked is up at the top! When that happens, skiing down into a different area can mean you’re going to have to take the bus to get back to where you started. Not the end of the world, but certainly a pain in the ass. Add in the large numbers of people skiing there and the resulting lack of freshies (relative to other resorts in the area, anyway), and I’m yet to have an awesome day at Niseko in three attempts – but with that said, Niseko is a good size and has decent terrain and amazing snow, and it would clearly be awesome on the right day. In my experience though, Teine and Rusutsu were always better – fewer people, more fresh tracks, more fun, and in Teine’s case, better (i.e. steeper) terrain. On top of that, when I was living in Sapporo a day trip to Niseko involved an early morning train or bus, taking almost three hours from my front door to the snow – whereas I could be at Teine in a fraction of the time:

How to get to Niseko ski resort

Most visitors to Niseko will arrive at Chitose airport from where it’s a 2-hour(ish) bus transfer. There’s a good access info page here, but if you want to hit Niseko from Sapporo the best way to do this is to visit the tourist information travel centre in Sapporo station (north-west corner of the main concourse) and get their combo train / bus & lift ticket package – it’s way cheaper than buying them separately, and the staff will give you clear and up to date instructions with train times etc. If you’ve arrived in Hokkaido by ferry to Otaru, you’ll likely be spending the night in Otaru and then from there it’s only an hour or so by train to Kutchan ( 倶知安 ) station (just below Niseko – you can take the local bus / taxi from Kutchan up to Niseko)

Even though I think Niseko isn’t always quite all it’s cracked up to be (or in any case I’ve always had bad luck there meaning it didn’t live up to the hype), it’s definitely a good hill and given that Teine is a local Sapporo hill and Rusutsu basically just has a big hotel rather than a village, Niseko remains the best destination if you’re going to Hokkaido for a ski holiday. If you’re staying in Sapporo en route to Niseko, it’s well worth looking into having a day at Teine; also consider taking a day trip over to Rusutsu from Niseko (easily done) if you fancy a change of scenery.

Resources and Useful Links for Riding at Niseko

Check out my quick guide to Sapporo

Search for hotel deals in Niseko and Sapporo

Airbnb is another good option in Japan, if you’ve never used it you can get a 30 dollar discount by signing up here

Travel insurance with snow sports cover from World Nomads. Their flexible insurance can be bought even if you’re already in Japan – I once found out the hard way (in Thailand) how important this can be!

Snow Forecast for Niseko (snow-forecast.com does exactly what it says on the tin – my go to for accurate snow forecasts!)

Click the banner to pre-order a JR Pass for a 40-dollar saving (read more on whether you should get a JR Pass):

Have you been to Niseko? What did you think? Does my information need updating? Do you have any questions about skiing in Hokkaido? Leave a comment below and I’ll get back to you.

This page contains affiliate links i.e. if you use them to book accommodation or purchase travel insurance, 4corners7seas will receive a commission from them; this comes out of their profit margin at no extra cost to you. I’m linking to them because I know, use, and trust their products. If you’ve found this page helpful, please consider using my links; thank you in advance should you choose to do so!