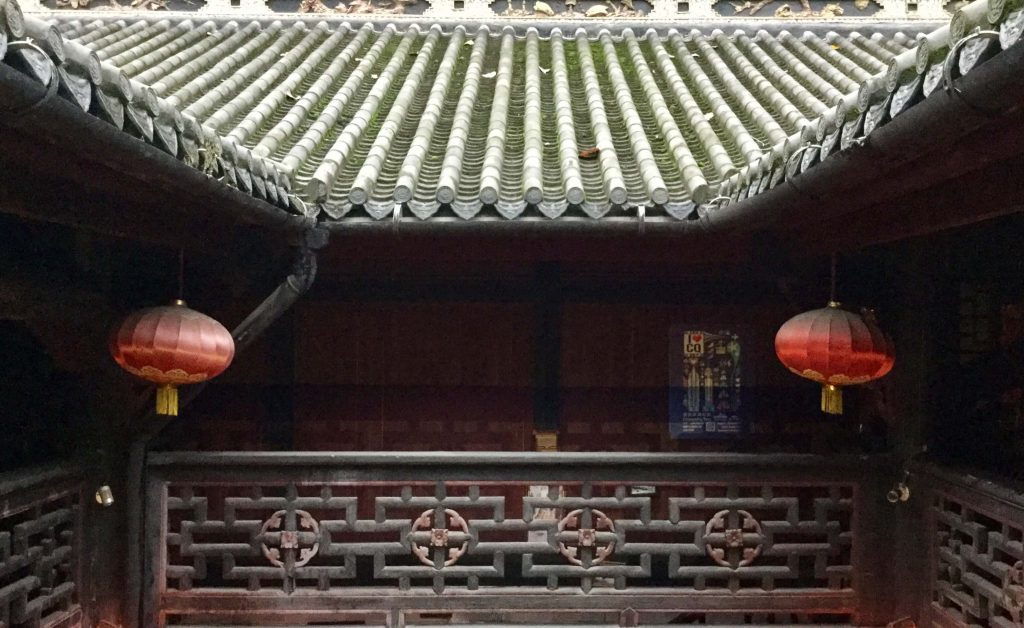 Why are you even here? This wasn’t the plan at all. You were supposed to be in Tibet. 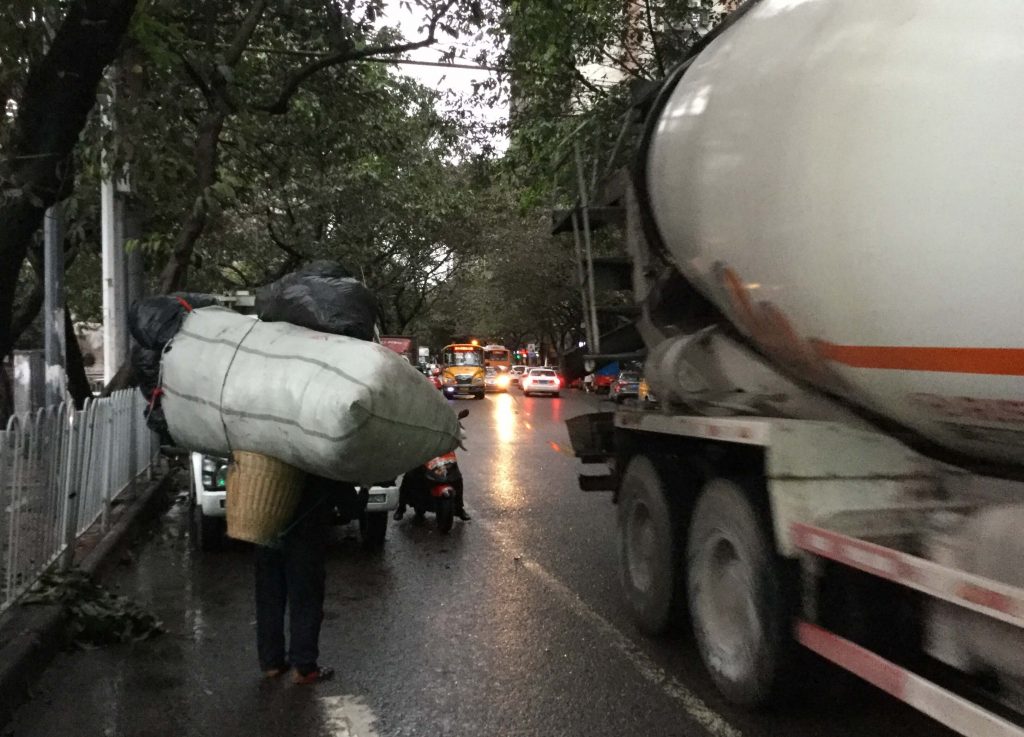 Crossing the road, you tuck in behind the old bloke bent under the weight of an enormous load of empty plastic bottles as a concrete mixer rumbles by, on its way to feed the new-growth forests of faceless tower blocks conquering the trees somewhere on the edge of this vast and booming conurbation, the truck belching a cloud of exhaust fumes into your face as it passes; holding your breath you sidestep back out past the bottle collector, straight into the cloud of cigarette smoke emanating from some gormless scooter driver’s helmet, from the kind of cigarettes they smoke here which reek like there’s a whole pack in every single stick. 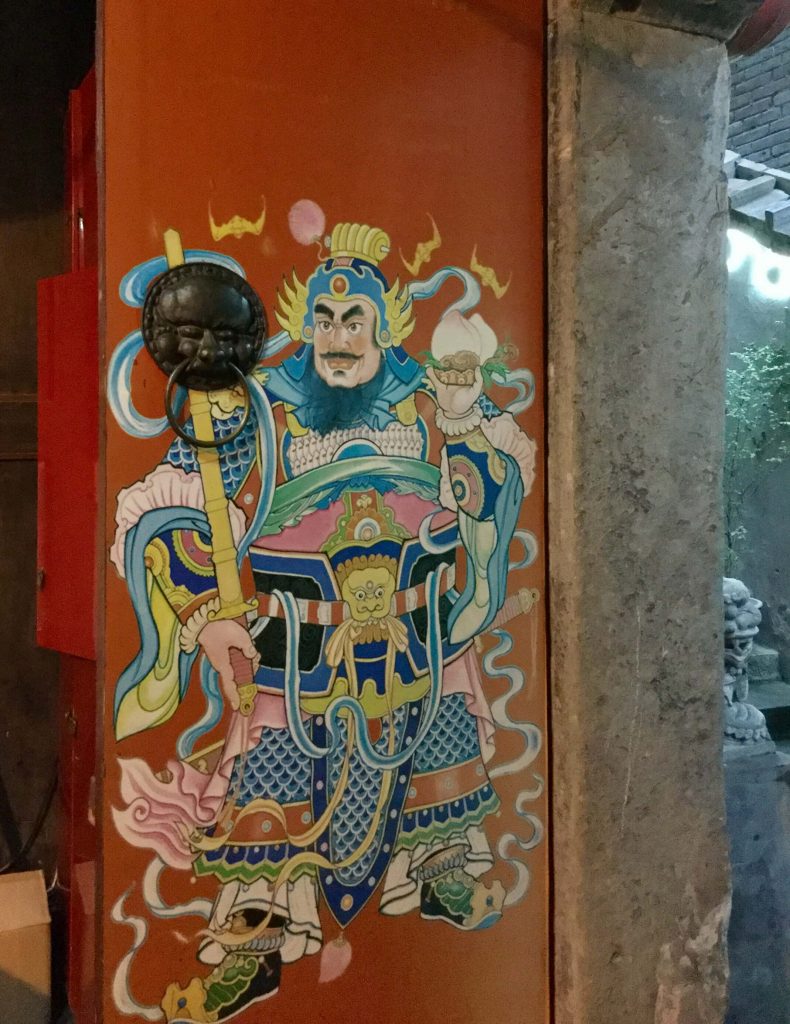 At least the smog isn’t bad today, the air having earlier been scrubbed by the rain, but you’re coughing and spluttering as you find a crack in the railing and finally escape to the relative safety of the sidewalk’s cracked pavement. But now here comes yet another smartphone zombie, eyes down and glued to the screen, a walking accident waiting to happen; but you won’t be involved, turning your shoulders and adjusting yourself to avoid a collision, spitting an off-hand curse in his ear as you pass.

And that’s not the only spitting going on; far from it. You hear it somewhere close at hand, that awful sound of someone hacking and retching up the thickest phlegm from the deepest recesses of their respiratory tract; it actually sounds like they may even have managed to hawk a lump of lung tissue up into their own mouth… then comes the pregnant pause before launch, that brief moment as they savour the flavours of a mouthful of mucus while you try to spot the danger – and there he is, it’s the old timer a few feet to your right, you spot him just as he lets fly and you watch, horrified, as an enormous globule of sputum splats down on the street with a diameter of inches, not far from your feet. It doesn’t matter how many times you see and hear this little piece of performance art – you never find it any less grotesque. 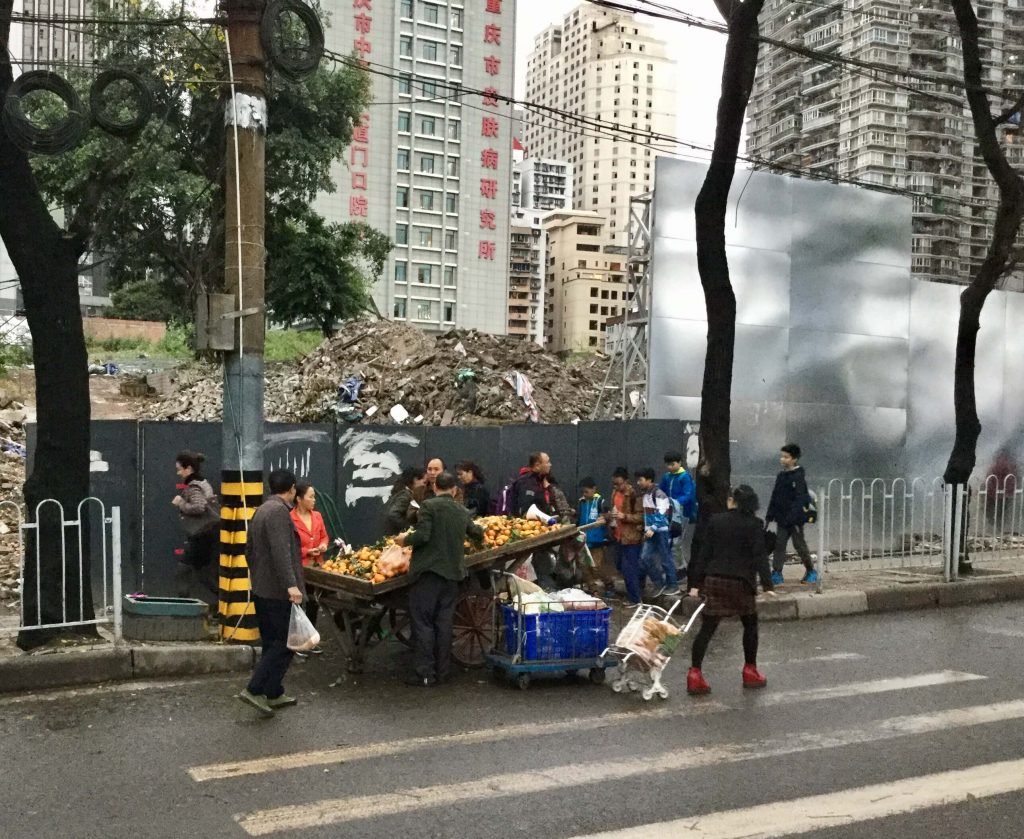 A flash of colour catches your eye across the street among the greyness, distracting you from the bodily fluids you’re about to step around; a vendor hawking oranges off a hand-pulled cart he’s just parked right there on the pedestrian crossing that you should’ve used, piles of rubble visible in the wasteland behind the barrier beyond him. 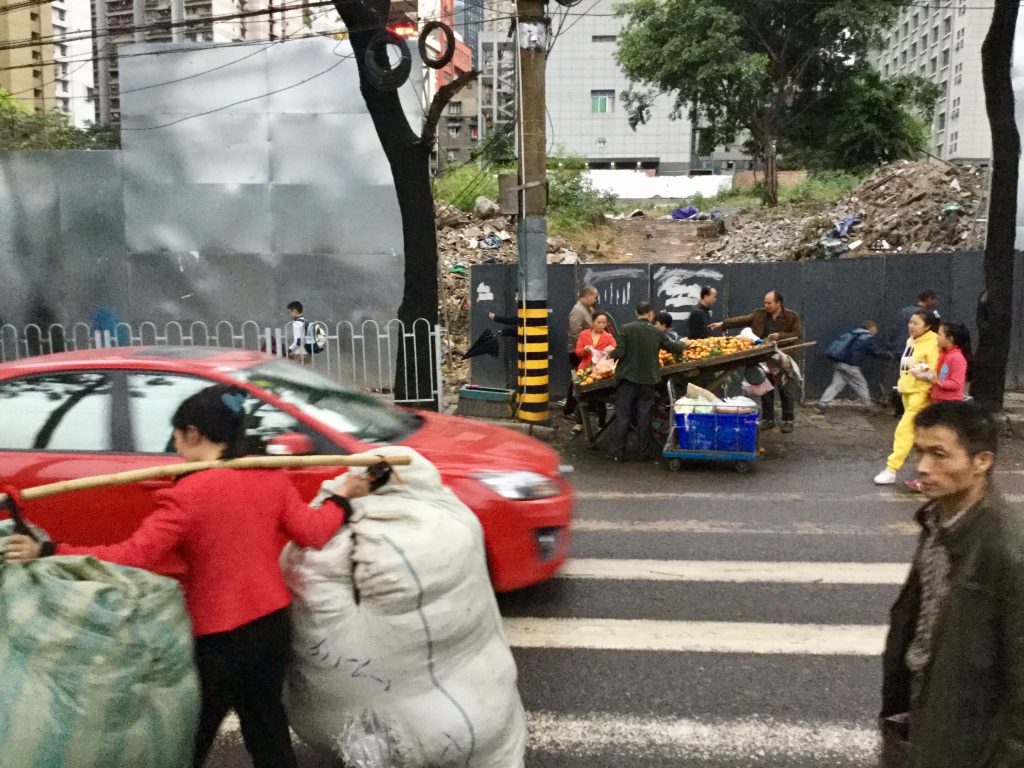 Pausing to take a photo, you sidestep again as a leather-faced woman squeezes past between you and the traffic, a bamboo pole across her shoulder with a large bag of something-or-other on either end, her red coat another flash of colour. It’s a popular colour here, red, being associated with good fortune; red coats, red lanterns, red shoes, red cars, red boots. 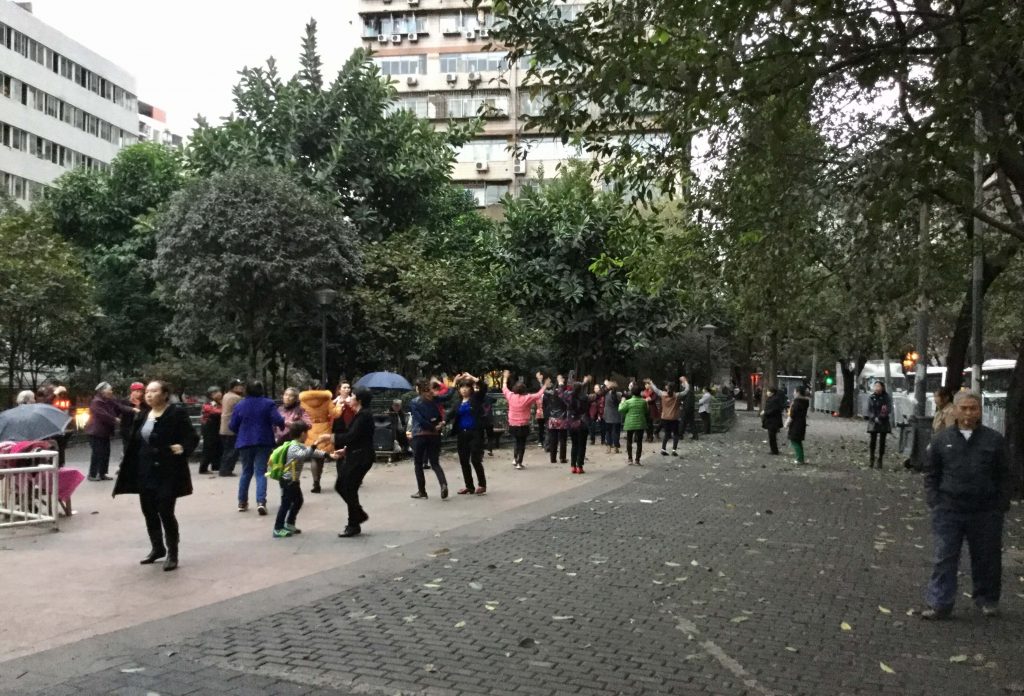 And now you come to the source of the music you’ve been hearing wafting up the street, snatches caught between the blaring of horns and the low rumble of the city, getting louder and louder as you draw closer until it drowns out even this heaving metropolis; it’s a common sight, one you’ve seen all over the country, the synchronised troupes practising their dance routines in public spaces to bizarre trance remixes of pop melodies. This lot are mostly female, mostly middle-aged or elderly, and don’t have the snappy routines and well-drilled timing you’ve seen elsewhere; but they’re having fun and keeping fit, and holy shit are they cranking out the beats! The volume is deafening, like standing right in front of the speakers at some dance music festival, the vibrations felt in your very bones. A number of onlookers sit and stand around the edge of the little square, looking utterly bored despite the decibels, dawdling with hands in pockets and cigarettes dangling out the corners of their mouths. You catch one bloke’s eye and nod a greeting; he just looks back at you impassively as he draws on his cigarette. 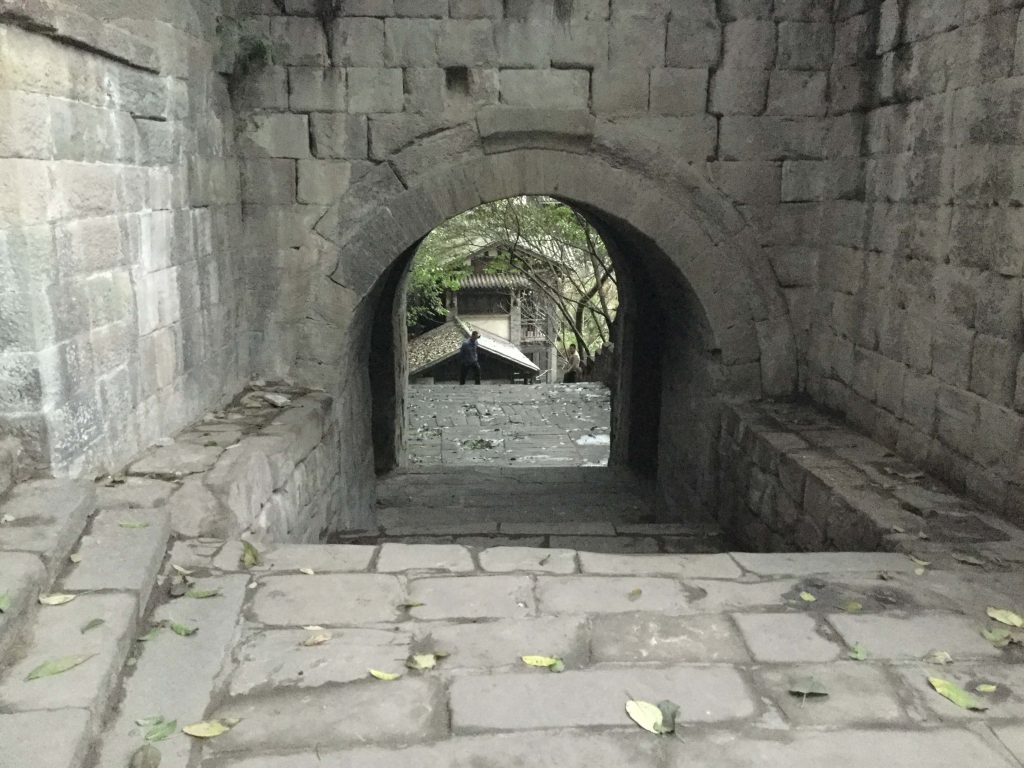 Nod hanging unrequited in the air, you turn off the main road down the steps into this little preserved historical district of old Qing-era buildings within which your guesthouse is tucked, an island of old-world charm surrounded by a grim industrial modernity. Arriving by dark the night before it looked shabby, but even in the drab light of this dreary day it’s a pleasingly nostalgic district, having a faded grandeur that’s somehow reminiscent of a hillside town on the Mediterranean, or the pictures you’ve seen of Havana, Cuba. 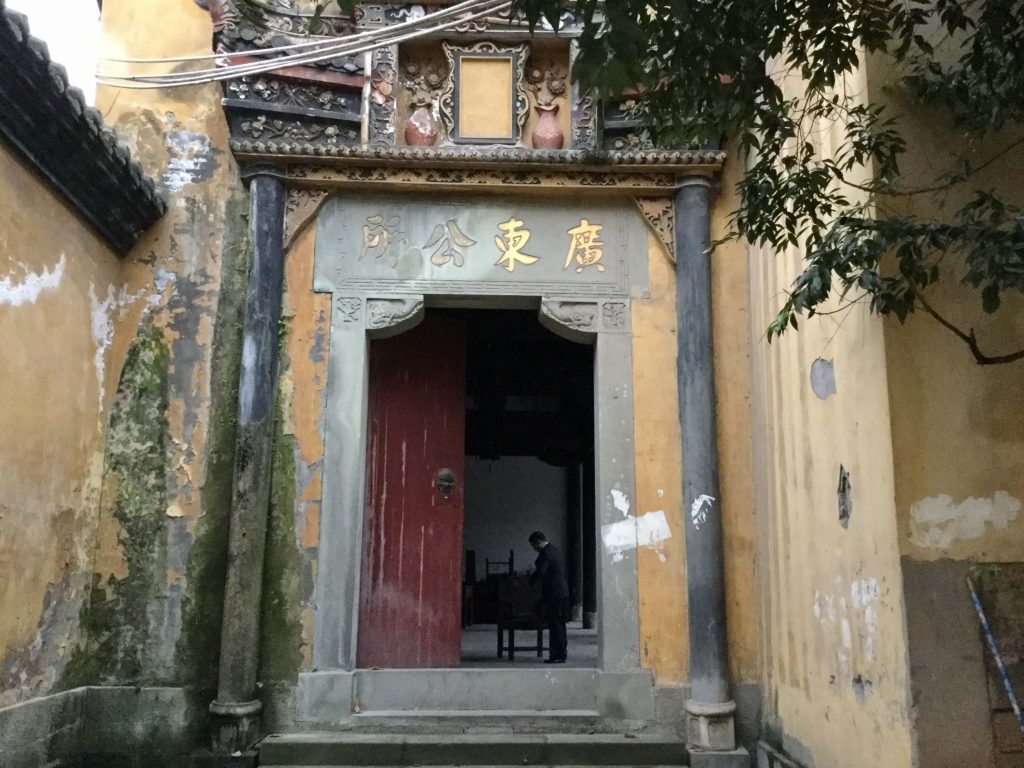 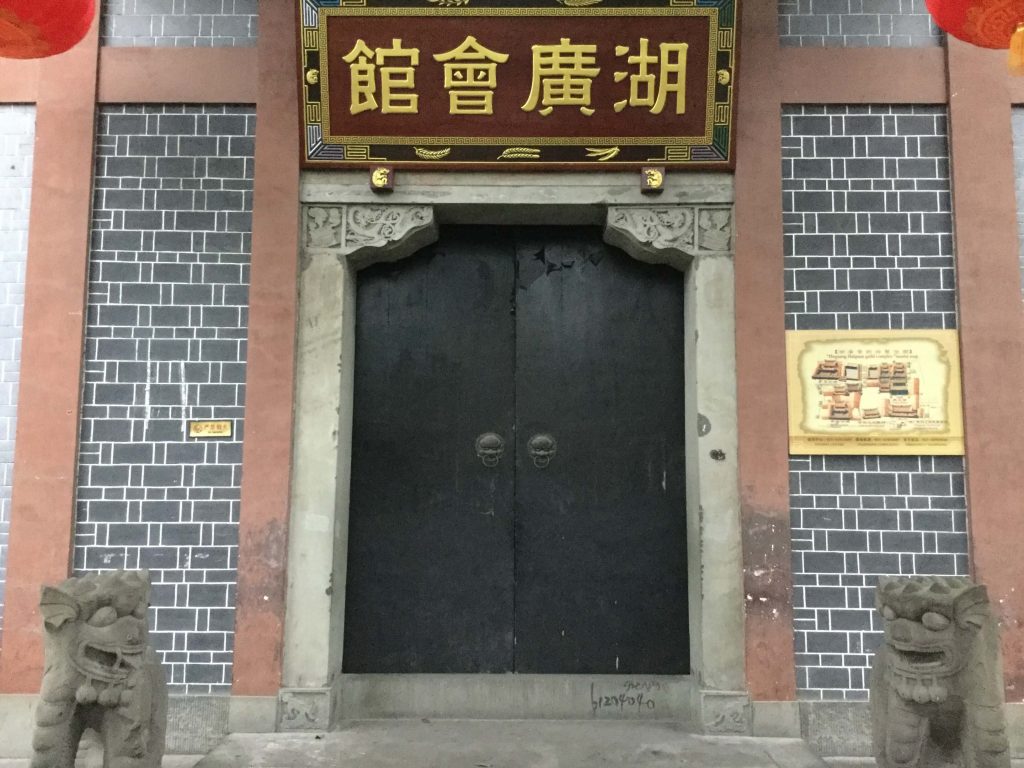 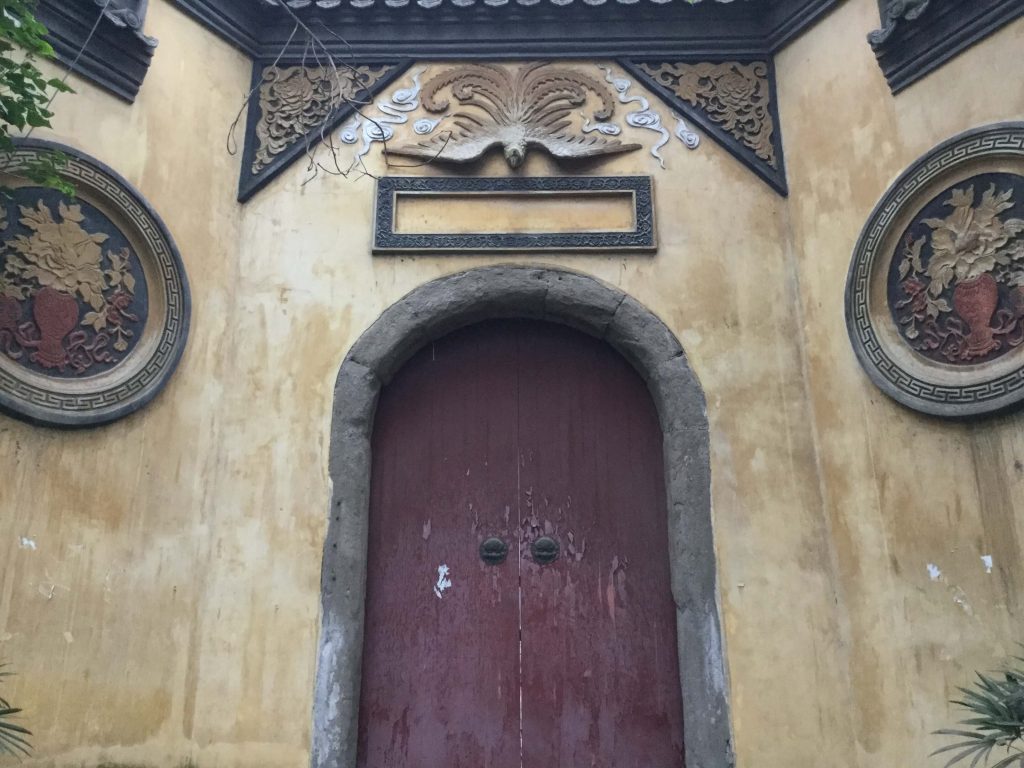 Descending away from the thumping beats above, you pass between the crumbling facades of old merchant courtyard buildings and the Huguang Guildhall, the paint cracking and peeling, occasionally catching glimpses of the interiors through an open portal or two, glimpses of the hillsides and the mighty river over a ramshackle wall or two. 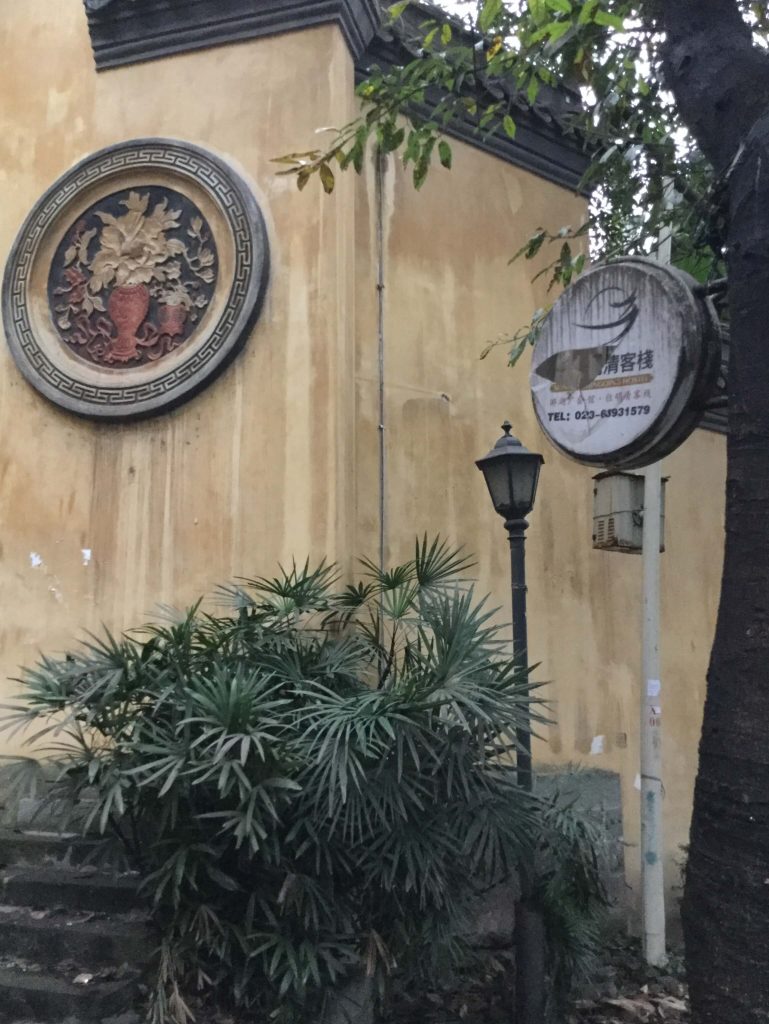 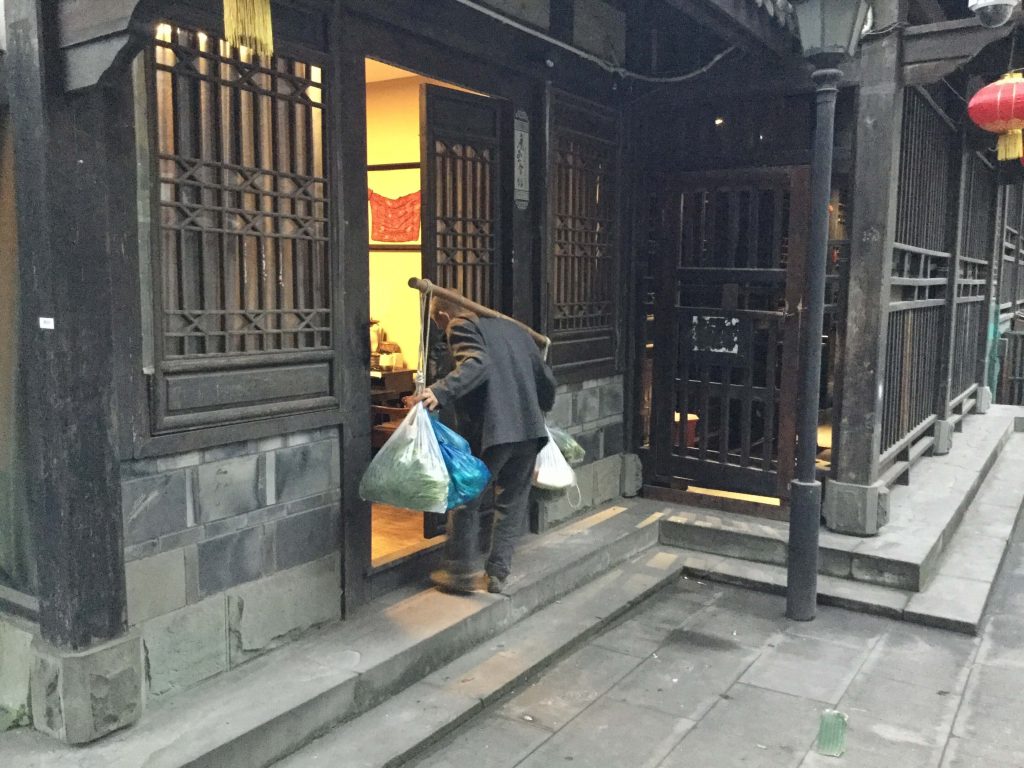 An old man stoops at a doorway, his shoulder bent to a length of bamboo loaded with bags of produce; a restaurant perhaps? It’s certainly a handsome building and would make fine surrounds for a meal. Beyond it, you find yourself looking up at one of this city’s many towering bridges as it spans the river, carrying on its double decks both a road and one of the light rail lines composing a gleaming new public transit system that wasn’t there on your previous visit but 8 years before; you also see people crossing it on foot, and would do likewise. How to get up there? 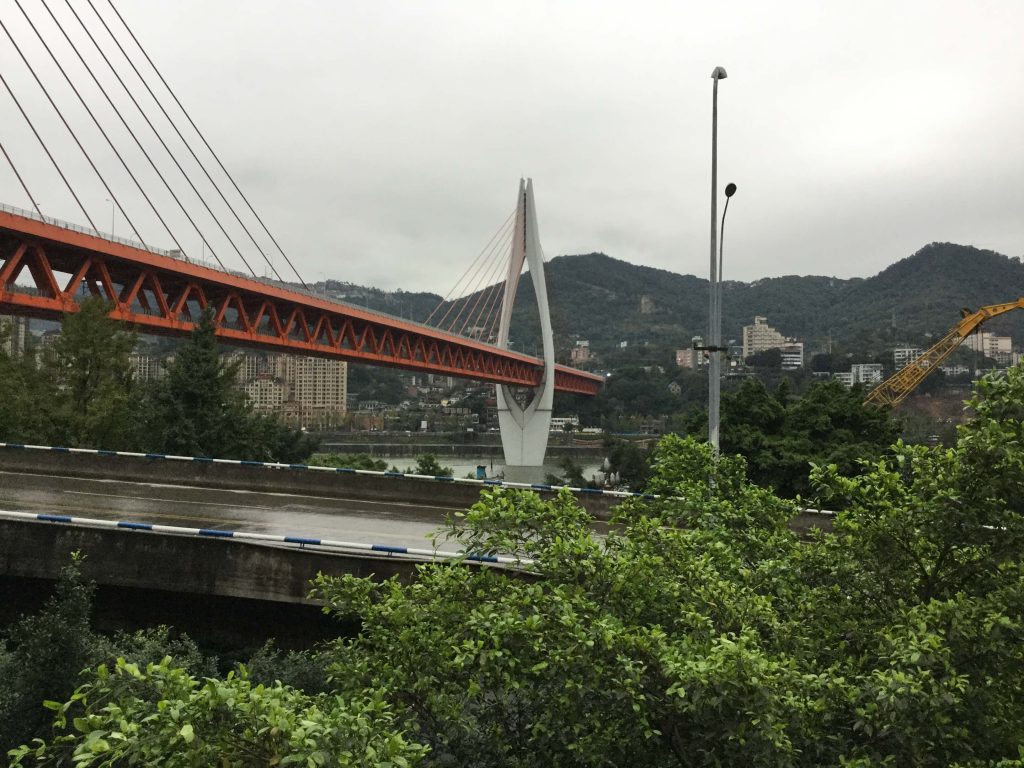 As you search for a way up and round onto the bridge, a scruffy little dog appears above you at the top of a flight of steps; you regard one another for a moment, before he canters past and pauses, looking back at you. Seems like you’re supposed to follow, and so you do, back up another flight of steps that leads back up to another road, this the one running over the bridge. 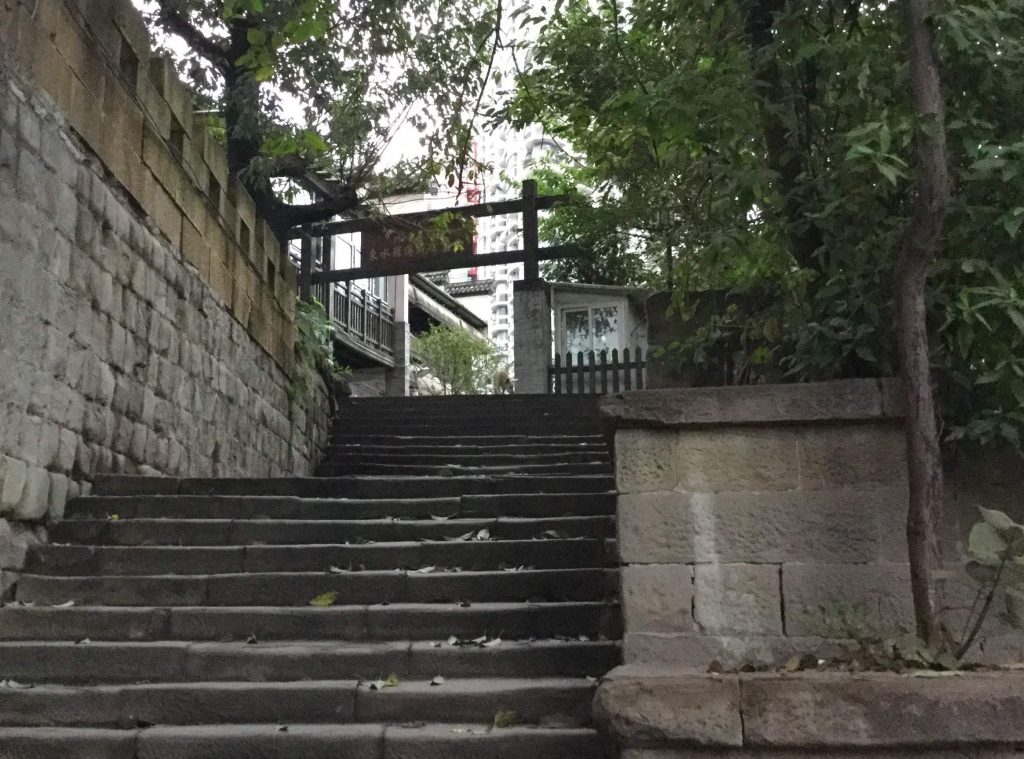 The little dog vanishes as suddenly as he appeared, but he showed you what you were looking for, and now as the road gets up behind the old yellow buildings you see the garbage-strewn no-man’s land on the slope between buildings and bridge, a middle-aged lady rummaging down there with a bin liner, picking out and bagging the recyclables. 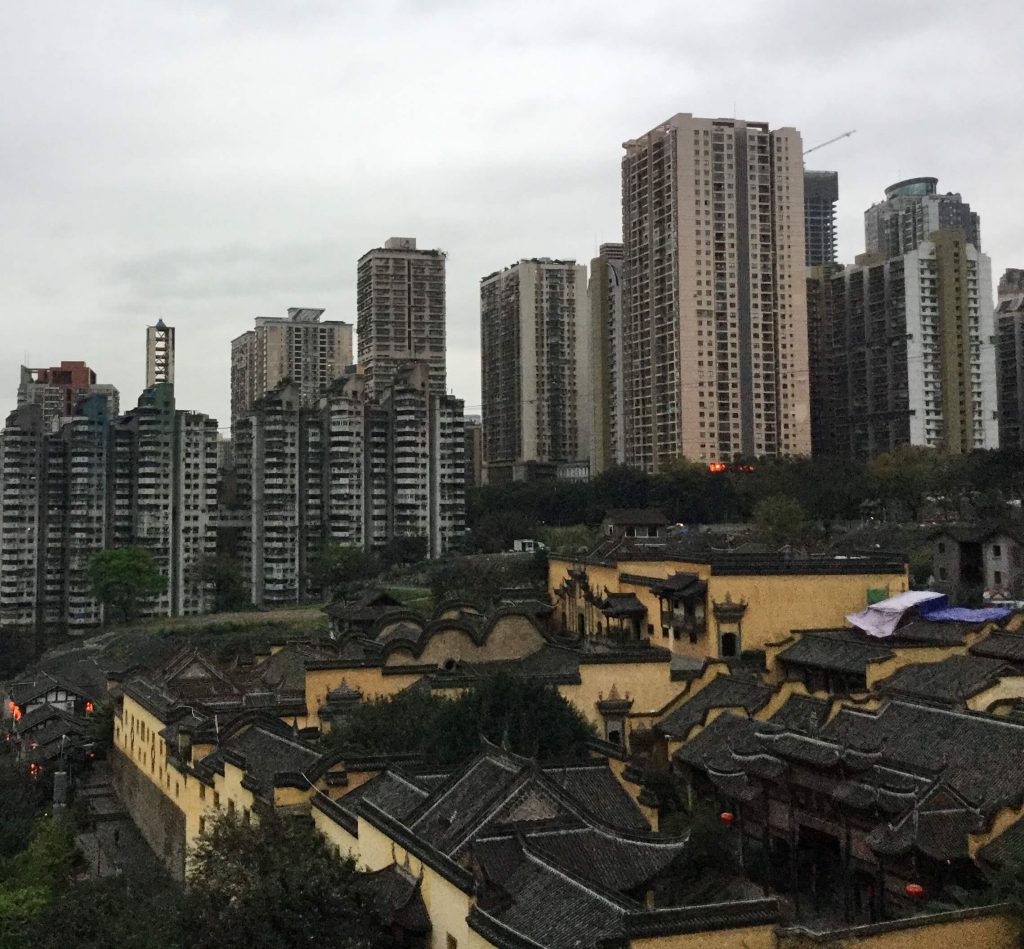 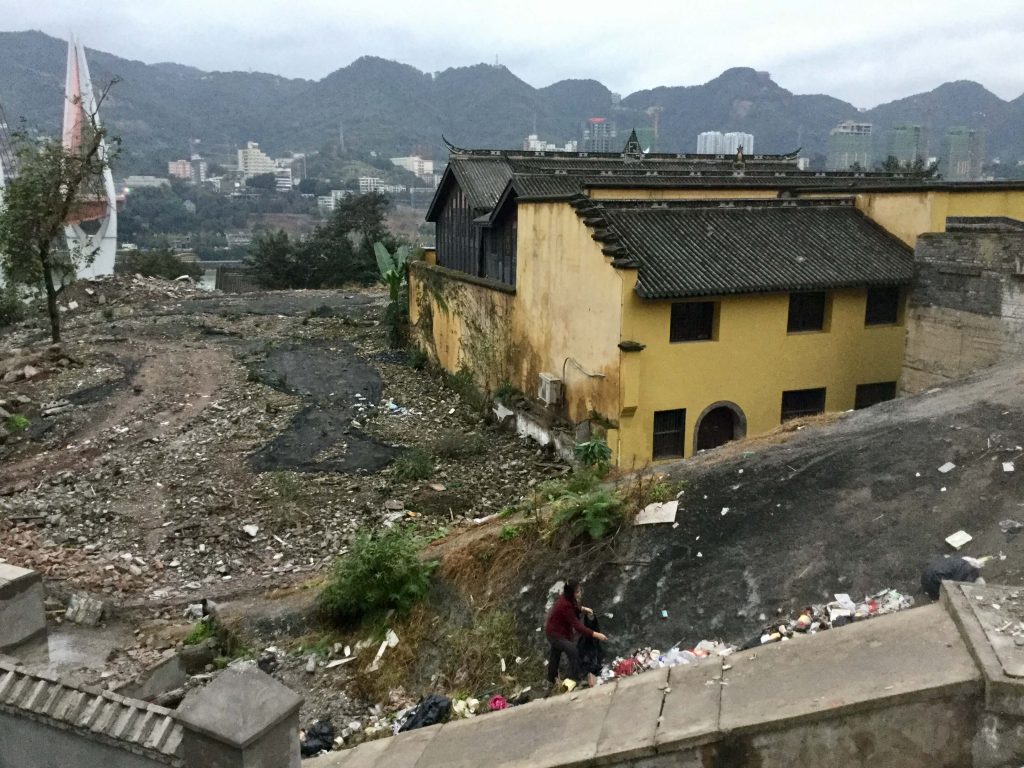 As you walk out over the Yangtze you’re battered by sporadic gusts of wind and flurries of the cold November rain which is starting to fall again, the girl in red boots walking up ahead holding her umbrella flat against her face like a shield; you don’t have one, so you just hunch your shoulders and walk, stopping to take pictures when the rain intermittently stops. 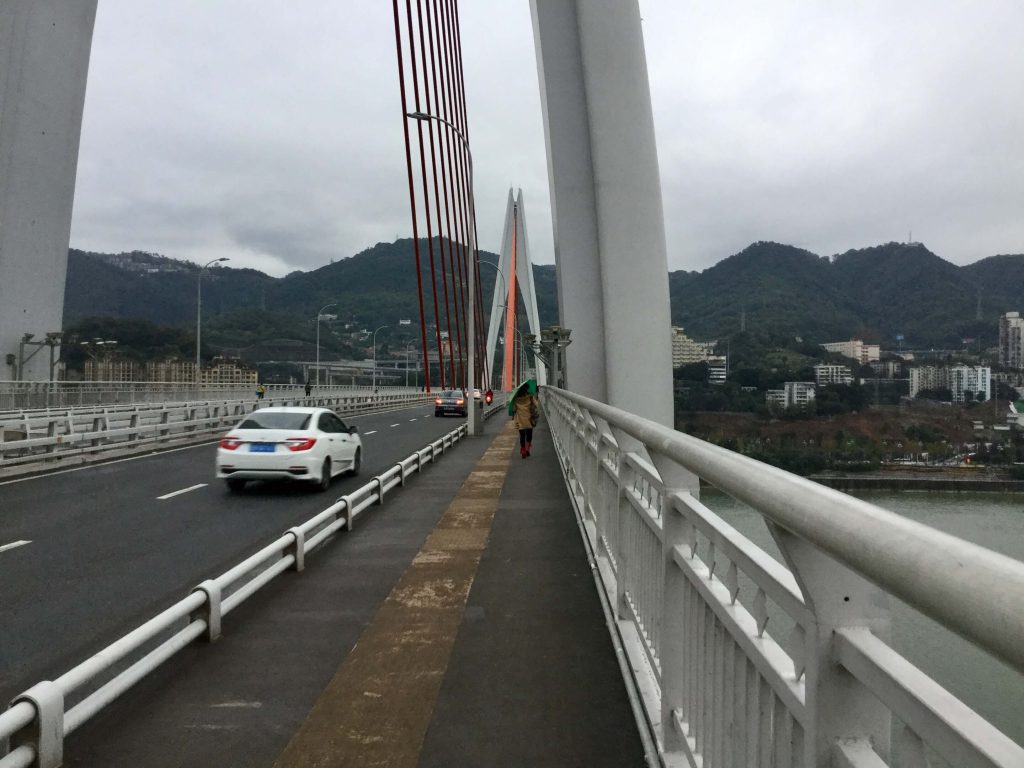 There, over on the far side of the murky waters, stands a double-towered skyscraper shining gold from head to foot. It’s the tackiest building you’ve ever seen; back there, a woman sorts through piles of trash to pick out a meagre living, and over there a gold-plated skyscraper stands like some garish beacon of nouveau riche kitsch. 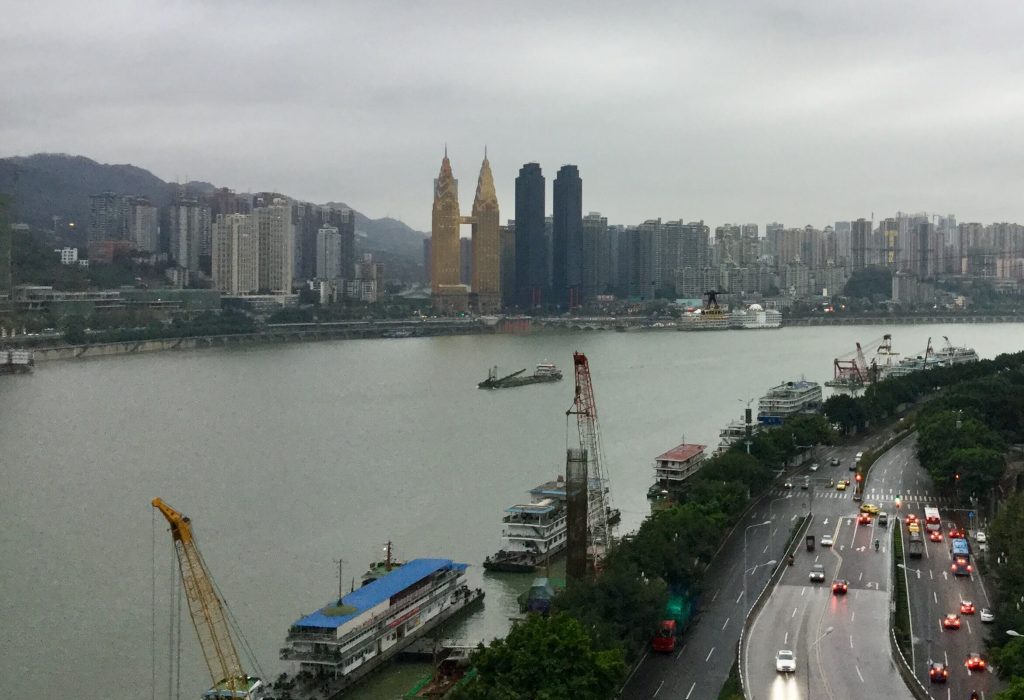 You’re in Chongqing, the so-called “biggest city you’ve never heard of”, the City of Bridges, the City of Spices, the City of Phlegm and Trash, this ugly, beautiful city of hills and fog and rivers and smog; and it occurs to you that you’ve just experienced the most condensed ten minutes of early-21st China you could possibly imagine, an intense 10-minute microcosm of all the contradictions and juxtapositions you see when travelling round a country racing forwards in its development while its industrious people hustle and dance in the streets…

See here for some history on the Huguang Guildhall