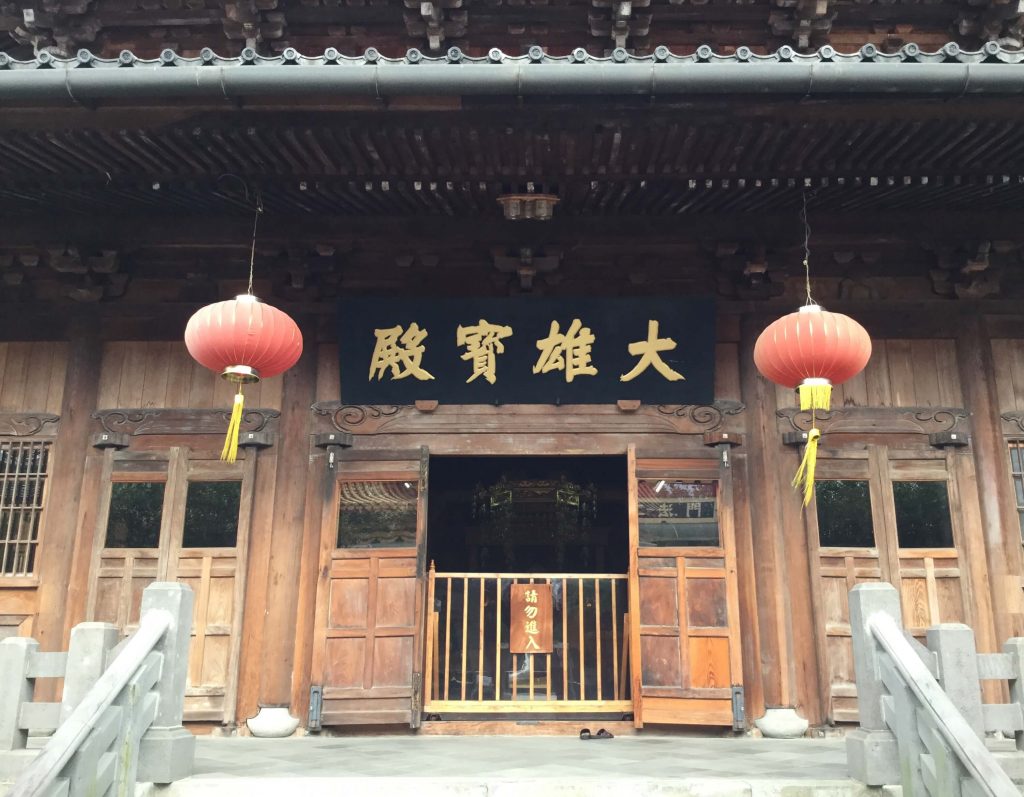 As a former resident of Japan who moved to Taipei, it was fascinating to see the Japanese influence on this originally Chinese culture, Taiwan having been colonised by the Qing Empire in the late 1600s and then the Japanese Empire for 50 years from 1895 to 1945; this influence is actually most obviously present in the cuisine (and also if you dig in to the linguistics there are plenty of Japanese loanwords in Taiwanese Mandarin), but there are fewer obvious physical reminders (i.e. Japanese buildings) than you might expect.

A fair number of Japanese buildings are still standing though, some in full use and others just bare remnants; if you keep your eyes open and know what they look like, you’ll spot them here and there.

The Shinto shrines, especially, have by and large not survived, their old torii gates today standing lonely testament to what was once there – as Shinto was used to instil patriotism and loyalty by the colonial power, it was quickly cast off after 1945 as a symbol of imperial control.

This rather forlorn torii is all that remains of Houtong Shrine, on the hill behind the town’s (also abandoned) coal mine:

(Houtong is mostly known these days for being ‘Cat Village’, but it’s also the starting point for a couple of cracking hiking trails up to the former gold mining town of Jiufen)

These two torii stand in Linsen Park in central Taipei’s Zhongshan area, near where I used to live: 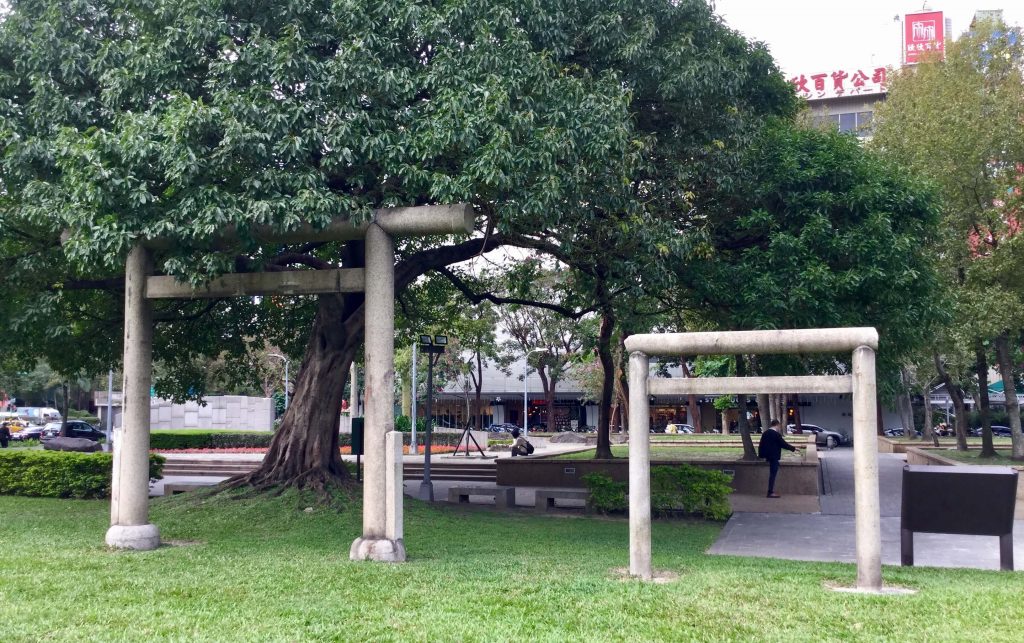 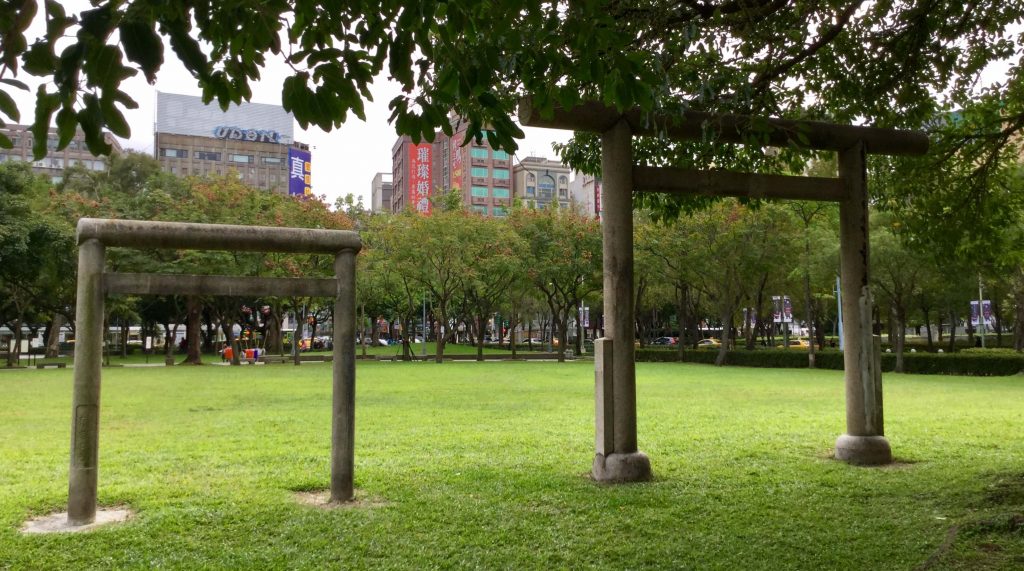 I would sometimes run a few laps of the park (the climate in Taipei not usually being favourable for my preferred longer-distance routes), and from what I understood of the information board next to the torii, the Japanese built a fairly large shrine there which attracted a kind of shanty town featuring all sorts of vendors and small businesses operating out of shacks around the shrine’s perimeter. The shrine fell into disrepair after Japanese rule ended, and the shanty town was eventually cleared out and turned into the park you see today; not sure what happened to the people living and doing business there (though I can’t imagine it worked out well for them), but the park provides some welcome green space in the centre of the modern city.

The head Shinto shrine in Taiwan, the Taiwan Grand Shrine, stood on Jiantan Mountain near Shilin Market, on the site now occupied by the Grand Hotel. The best-preserved Japanese shrine in Taiwan is apparently the Taoyuan Shrine, repurposed post-1945 as the Taoyuan Martyr’s Shrine.

The Japanese-built Buddhist temples, on the other hand, have remained mostly in use, what with Taiwan also being a largely Buddhist country; there are a number of Taiwanese temples of the Zen Buddhist sect (Zen is Chan in Mandarin), a sect most strongly associated with Japan. One of these, the Rinzai Zen Temple in Yuanshan, is the most obviously Japanese building I’ve seen in Taiwan (though the original Japanese wooden temple is now tucked away in the middle of a larger compound):

Another interesting little spot is this small Buddhist rock shrine, which I visited as part of a hike in the Beitou District – although apparently of Japanese origin, it is these days festooned with Tibetan prayer flags: 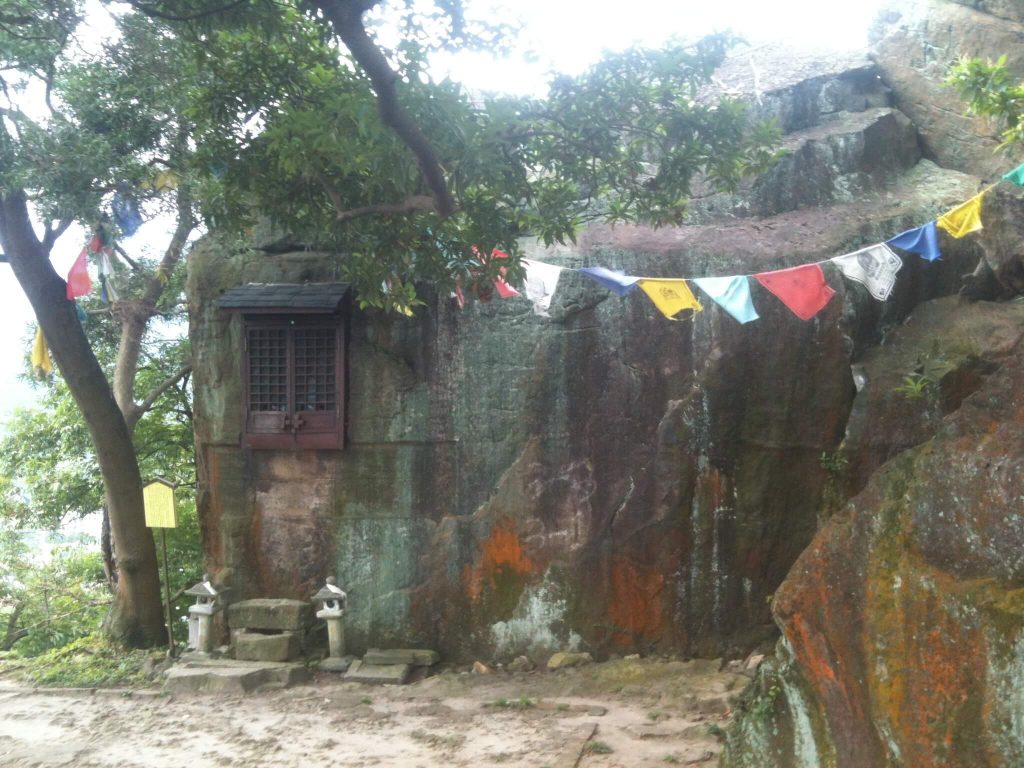 Not far from there, in the Xinbeitou hot spring district, there’s a Japanese temple of the Shingon Buddhist sect called Puji Temple (Fusai-ji in Japanese). I visited Puji Temple on the same hike as the above rock shrine, though amusingly I managed to bodge the photo with my fingertip (the joys of iPhone photography…) and didn’t notice till I got home: 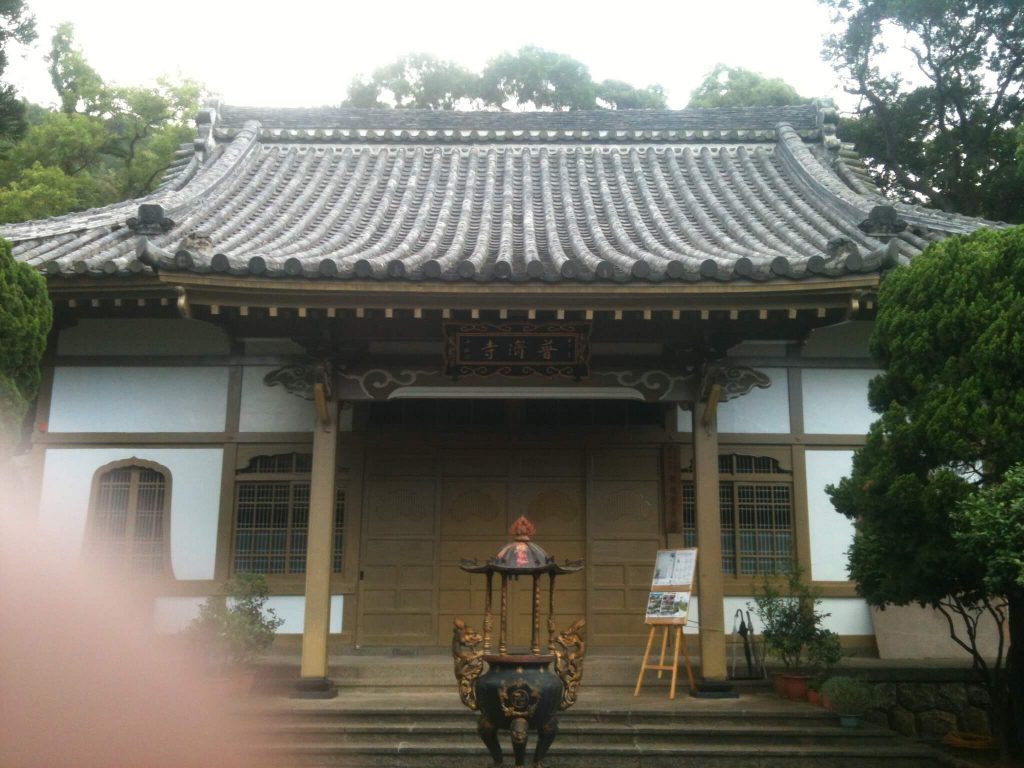 The Wikipedia page is only in Chinese (or Japanese), but you can see some fingertip-free pics there! Also see the excellent Spectral Codex blog.

Back in central Taipei, the busy Ximending district, an area known for its shopping and youth culture, is home to the remains of Nishi Honganji Temple (Xiben Yuan in Mandarin), which was the Taiwan branch of Japan’s Jodo Honganji Buddhist sect (the enormous head temple of which is located in Kyoto, just northwest of Kyoto Station). The most prominent feature is the temple bell, on top of a mound next to the main road (Zhonghua Road) a short distance south of Ximen Station: 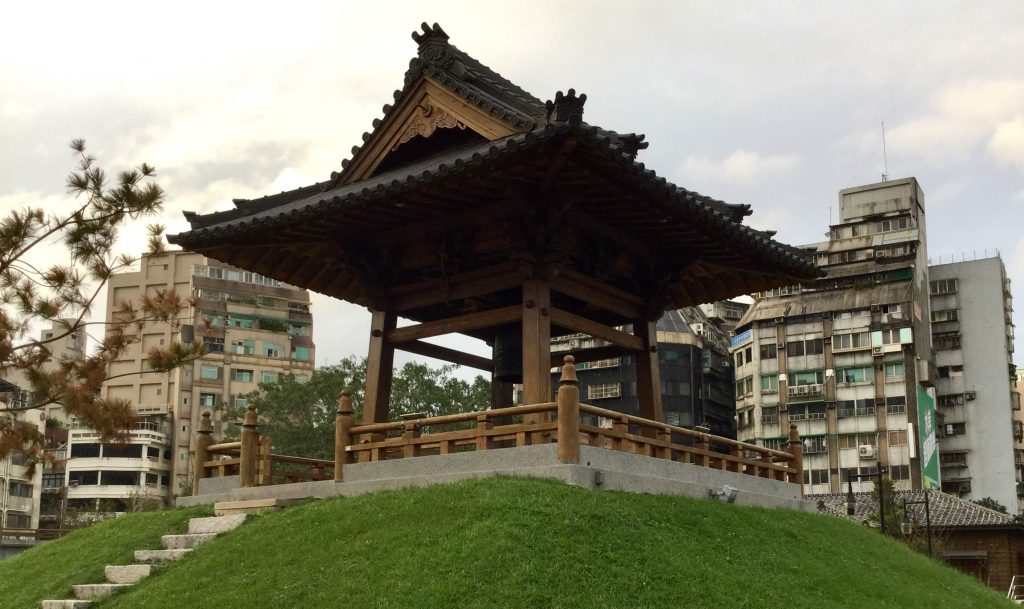 The temple’s main structure is gone, but some subsidiary buildings still stand and have been renovated. It’s a calm, open public space which contrasts nicely with the cluttered bustle of Ximending; see this page from the Taipei City Government for more information and photos.

The Japanese also constructed a series of European-style administrative buildings in central Taipei, which continue to serve as the homes of various museums, government ministries, etc. This is the same style of architecture that gave rise to, for example, the Amsterdam Station-esque facade of Tokyo Station, a trend in late-19th and early-20th Century Japanese architecture to go for grand European-style buildings as symbols of Japan’s industrialisation and ascendence as a modern world power.

See the Wikipedia page on Japanese architecture here for more information and examples, and see this neat blog post on examples of this type of architecture still seen in Tokyo today.

This Western-Japanese architectural style was brought to the colonies of Taiwan and Korea (and also Manchukuo i.e. Manchuria / Northeast China) in an effort to modernise and Japanicise them; in Taipei, the Qing-era city walls were torn down (though some gates survive, see here) in favour of the wide boulevards running past the cluster of Japanese-era buildings standing at the heart of Taipei to this day. Following are a few examples.

The Red House, just outside Ximen Station in the Ximending shopping area; originally a market, repurposed as a theatre, and now where most of Taipei’s LGBT venues are located (it was under renovation when I went by with my camera, so I couldn’t get a shot of the main octagonal building which is covered by the scaffolding): 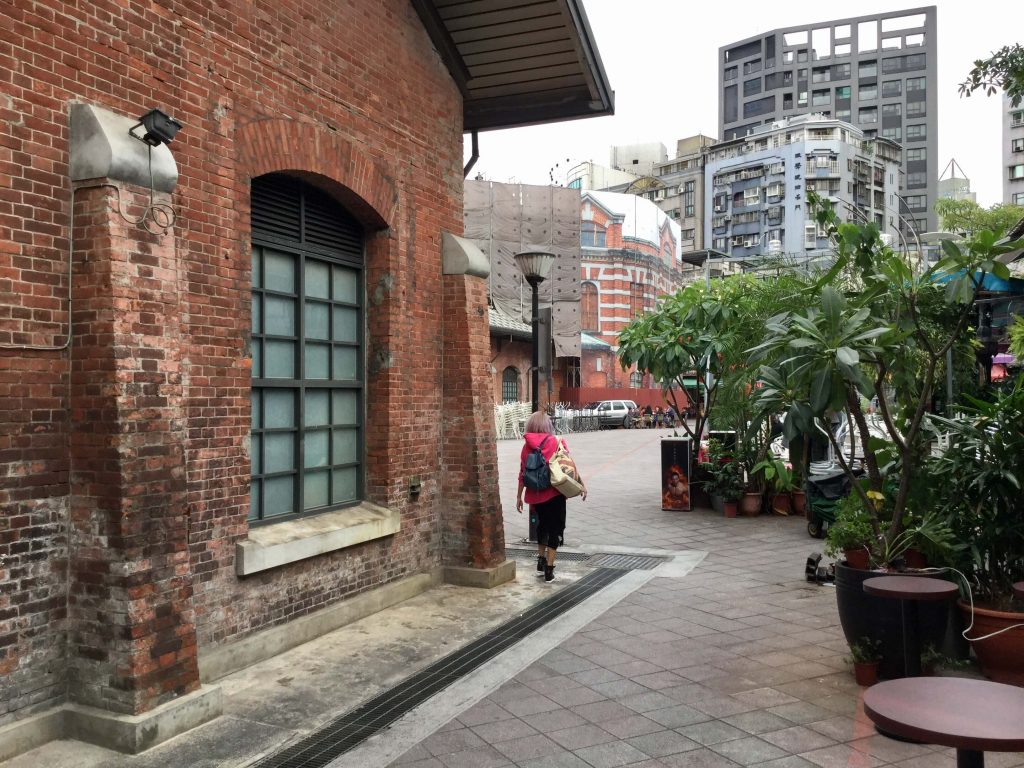 The Presidential Office Building, originally the office of the Japanese Governor-General: 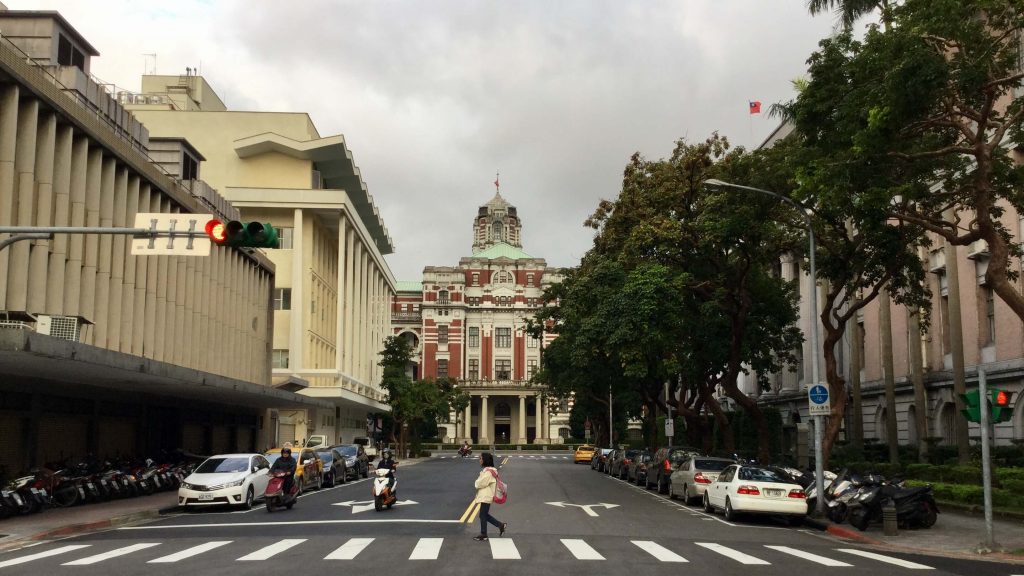 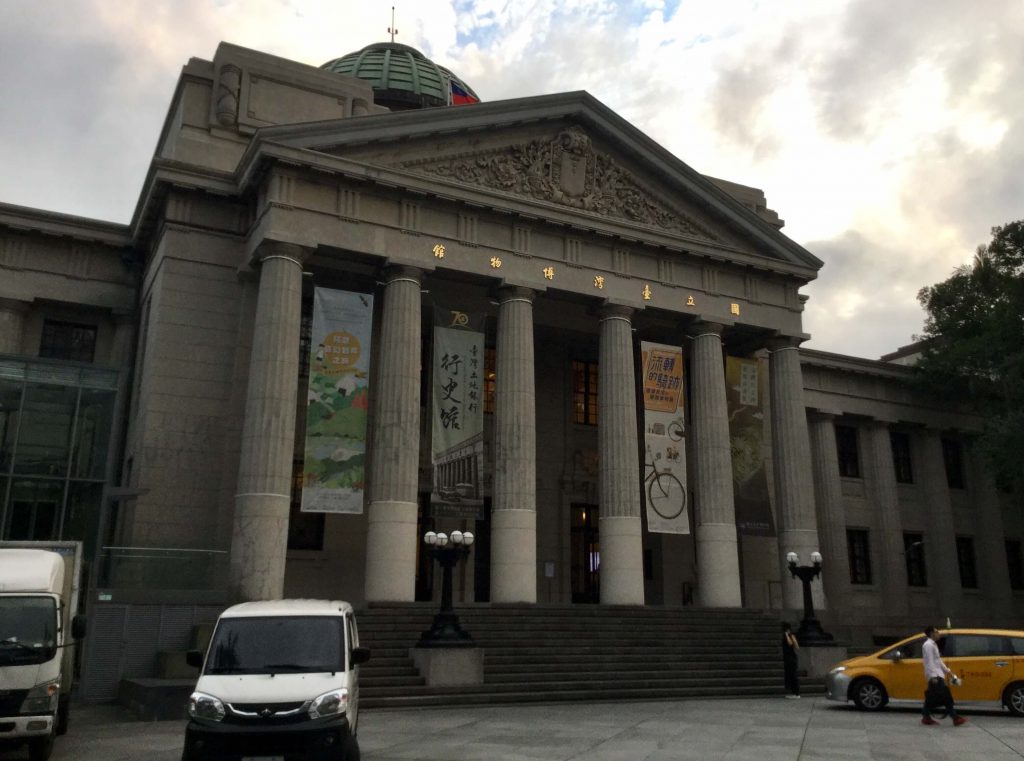 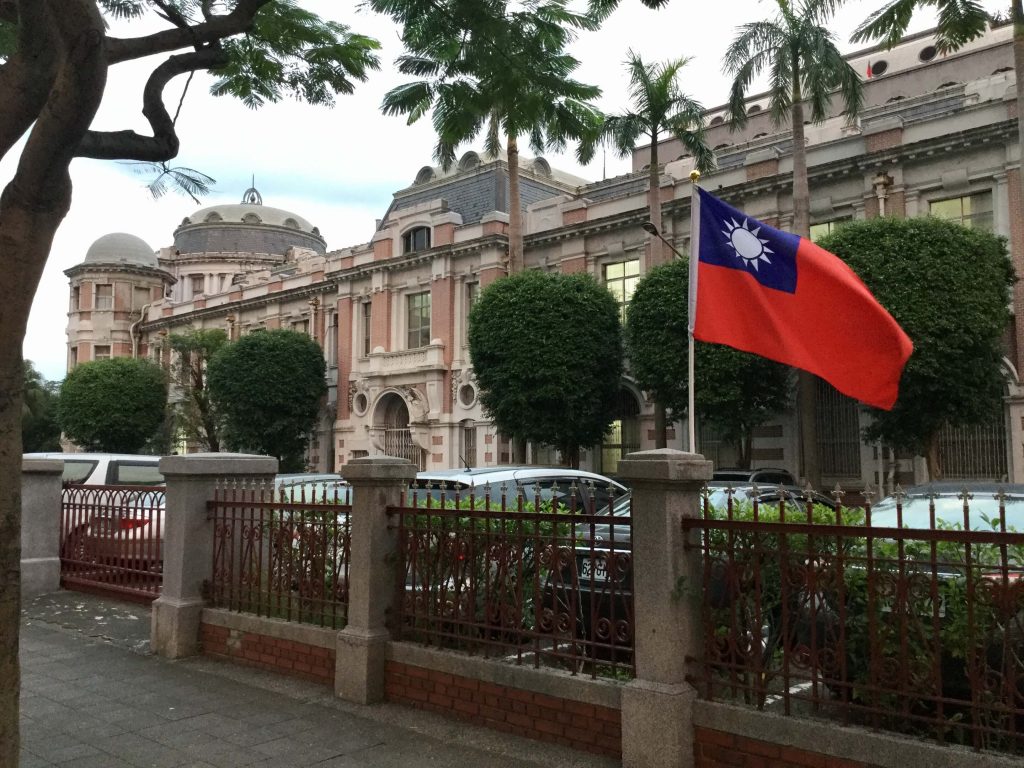 (There are fewer surviving examples in Korea, though a few prominent ones in Seoul are the old Seoul Station, (one side of) City Hall, and the original Bank of Korea building; many more were torn down post-independence, most notably the Japanese Government Building which had intentionally been constructed over part of Gyeongbokgung Palace as a sign of authority. The remaining colonial buildings now have protected status)

You could easily visit Taipei and never notice these buildings, or see them but not realise they were built by the Japanese; but if you’re a bit of a history or architecture geek like me, spotting them can add a little extra interest to your exploration of the city.

Have you been to Taipei? Any comments or questions about the city’s colonial architecture? Leave a comment below and I’ll get back to you.