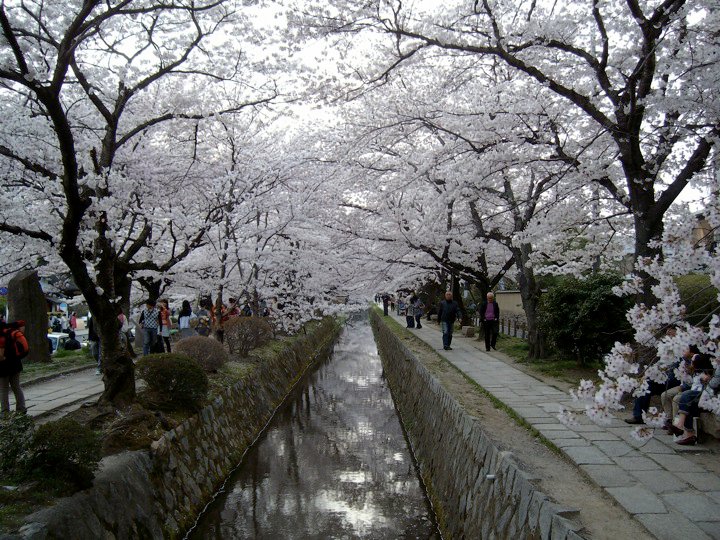 Tetsugaku-no-michi, the Philosopher’s Path, is a pretty 2km path alongside a canal in northeast Kyoto, the former imperial capital of Japan. It’s named for the early-20th Century philosopher Kitaro Nishida, who used to stroll along it in quiet contemplation on his way to work at Kyoto University.

The canal is part of the Biwako Canal system which brings water from Lake Biwa down to the Kamo River in Kyoto; the water flowing over the famous aqueduct at Nanzen-ji comes from Lake Biwa, and is the same water flowing along by Tetsugaku-no-michi. If you have the best part of a day to spare, you can actually start walking from Lake Biwa and follow the canal all the way to the Philosopher’s Path; it’s a great hike, especially in spring.

Alongside Tetsugaku-no-michi the canal’s lined with hundreds of tightly spaced cherry blossom trees and so is absolutely spectacular (and spectacularly crowded) when they bloom in early April – Tetsugaku-no-michi is probably Kyoto’s single most famous cherry blossom spot. If you visit at that time, bring your best camera and be sure to sample the matcha (green tea) and sakura ice cream – but don’t be expecting to be able to do any philosophising or quiet contemplation!

Throughout the rest of the year, the Philosopher’s Path is a nice enough place for a walk, though it’s also quite unspectacular in its own right and may be a little underwhelming to many visitors. For this reason, it’s best to do it in conjunction with some other sights – the most obvious being the Silver Temple (Ginkakuji), which stands at the northern end of the Philosopher’s Path, and Nanzenji, another famous temple near the southern end. Visiting these two temples via a walk along Tetsugaku-no-michi is a nice way to spend a couple of hours, and you can also do the Daimonjiyama hike up the hill behind the Silver Temple to one of Kyoto’s best viewpoints, and include a visit to the Keage Incline (another great cherry blossom spot) which is located near Nanzenji, just behind Keage subway station.

To take in all of the above, you can start from Keage Station on the Kyoto subway Tozai line; coming out of exit 1, turn left and walk uphill for a minute then turn left again up the steps between the houses. This brings you to the top of Keage Incline, a set of rail tracks on a slope which was used to raise and lower boats between the Lake Biwa Canal at the top and the Okazaki Canal at the bottom; the rails are still in place and a couple of pieces of old equipment are on display. The Incline’s lined with cherry trees and looks amazing when they bloom (again, expect serious crowds in early April).

The water coming from Lake Biwa splits at the Incline; most of it goes down in pipes to the Okazaki Canal, but some of it runs along a channel through the woods to Nanzenji & Tetsugaku-no-michi; once you’re done taking pics of the Incline, follow the water around at the top into the woods and down the path alongside the water channel. After 5 minutes or so you’ll arrive at Nanzenji via the back door, emerging from behind the famous aqueduct. Although the aqueduct isn’t a temple structure and was (only!) built in 1895 as part of the Lake Biwa Canal project (whereas the temple was founded in 1291 and the oldest extant buildings date to the late 1500s, the temple having burned down several times before then), the aqueduct has become Nanzenji’s most famous feature. The temple’s buildings are beautiful too though, with an impressive sanmon (entrance gate) and notable Zen gardens; the grounds are free to stroll around, but you have to pay to see the interiors and gardens (though you can actually see into one of the gardens from the path through the forest). From Nanzenji, follow the road north past Eikan-do (another famous temple, worth visiting if you have time and are happy to pay the 600 yen entrance fee – it’s especially renowned for its autumn colours) then turn right to find the southern end of the Philosopher’s Path, where the water emerges again having flown over the aqueduct and behind Eikan-do.

Now it’s simply a case of strolling along beside the canal, though if it’s cherry blossom time there’ll be a whole lot of people who’ve had the same idea. There are a number of small temples located just off the path (signposts point the way) if you’re interested, and also plenty of cute little cafes and souvenir shops; again, be sure to sample the matcha & sakura ice cream if you’re there in blossom season!

It only takes around 20 minutes to walk the path, though you’re likely to take longer with stops for photos, food & drink, and at the north end you’ll find the Silver Temple. The companion piece to the Golden Temple on the other side of the city (which it was designed to resemble), the Silver Temple is a more humble affair. It was designed by the shogun Yoshimasa, grandson of Yoshimitsu (who built the Golden Temple), and though it was originally intended to be covered in silver leaf it was left unfinished as it stood when Yoshimasa passed away. This gives the temple a strong element of wabi-sabi, a concept in Japanese culture of the beauty of impermanence and imperfection, in contrast to the bling bling of the Golden Temple. It’s the temple’s wabi-sabi that really makes it so popular with the Japanese, so try and see if you can get a sense for it – if not, the Silver Temple is likely to underwhelm. The small and unassuming main pavilion is the original structure dating to the late 1400s though, so even if it doesn’t impress you much in its appearance, you can at least be impressed at its survival of all the centuries of earthquakes, fire and war! It also stands in a famous Zen garden – be sure to go up the hill at the back for a nice view of the surrounding area, especially if you don’t intend to climb Mt Daimonji afterwards.

For those who do fancy the fairly short but steep walk up to one of the city’s best viewpoints, it’s time to hike to the site of one the annual mountainside kanji (Chinese character) bonfires lit during the summer O-Bon festival. Upon exiting Ginkaku-ji, turn right and walk towards the stone torii gate ahead of you; turn right again just before the gate, and then take the right-hand path when you come to the fork a short distance after that (the left fork dead-ends at a school). Now you’re on the path up to the bonfire site and some fantastic views – read my Mt Daimonji hike page here for more details and photos of the spirit bonfire and the hike itself.

From the bonfire site, you can either descend the way you came, or if you’re feeling adventurous you can continue up the path to the mountain’s summit (which has an even better viewpoint) and from there you can pick up the scent of the Kyoto Isshu Trail (Kyoto Circuit Trail, a 70km hiking path through the mountains) and walk back to Keage along the ridge. Kyoto Isshu Trail board 45-1 is located near the top of the mountain; if you take the path heading south-east from the summit viewpoint and walk 100m you’ll find it at the Daimonjiyama Yotsutsuji (大文字山四ツ辻) intersection, and from there you can follow the trail boards (in descending order) to trail board 33 at Himukai-Daijingu shrine, a short distance from where you started at the top of Keage Incline. This route is marked in green on the map above, but note that you shouldn’t attempt it only using that map; again, check out my Daimonjiyama page and also see my Kyoto Isshu Trail page for full details on the trail and the trail boards (the relevant leg of the trail is the Higashiyama Course, and it would be advisable to get your hands on the official map).

The walk from Keage Incline to the Silver Temple can be smashed through in little over half an hour, but taking it at a leisurely pace with photo stops and time to check out the temples it could take up a couple of hours. From the Silver Temple, if you hike up to and straight back down from the bonfire site, that should take in the region of 90 additional minutes, assuming you hang out for a bit to take pictures of the view; if you decide to hike back to Keage via the Kyoto Isshu Trail along the ridge, then you should plan on it taking 4+ hours for the full round-trip hike.

Any questions about Tetsugaku-no-michi, or the Kyoto Isshu Trail? Leave me a comment below and I’ll get back to you.

Search for hotel deals in Kyoto

Airbnb also has many options in Kyoto, though local rules mean you may only be able to book at weekends depending on the time of year. If you’ve never used it before you can get a 30 dollar discount if you sign up with this link

For more posts on Japan see here, and check out my quick guide to Kyoto

(Some of these are affiliate links i.e. if you click through to Hotels Combined or Japan Rail Pass and make a purchase, 4corners7seas will receive a commission from them. This commission comes out of their profit margin at no extra cost to you, and I know and trust these products from personal use. Thank you in advance should you choose to support 4corners7seas by using these links)