“The man made scenery of the Yangtze is spectacularly grim.”
– Michael Palin, Full Circle, 1997

“Marco Polo must’ve been pissed off by this point. It’s ‘orrible; it’s horrible. It’s a place to visit in a submarine this, this river. Look at it; it’s polluted to hell and back, innit? I know people moan at home, sort of saying “oh all our industries are gone and factories are gone, and people aren’t making things at home”; but they are here. I mean, everything you pick up’s made in China, innit, and look at what it does to the place, factories putting all this shit in the air. Let em keep it, honestly. We don’t want this at home; it’s depressing enough without having skies like this. You hear all the time, don’t you, you know; “we don’t do anything anymore, we don’t make anything. It’s all sort of coffee shops and paninis and charity shops”. But, at least we have blue skies. If you’re gonna be pissed off at home, be pissed off with a blue sky. Imagine being pissed off here!”
– Karl Pilkington, An Idiot Abroad

Palin and Pilkington are two very different travel presenters to put it mildly, but on the state of the Yangtze they agree. The rather more eloquent Palin’s ‘spectacularly grim’ is a very succinct way of describing it; the cities along the riverbanks look utterly bleak, the factories ‘putting all their shit’ both into the air and into the waters of the Yangtze. However mighty a river may be, there’s only so much poison it can take; even with China having woken up to its environmental challenges and showing signs of starting to tackle them, this great river will take many decades to return to anything approaching good health.

As for Pilkington, he and his co-presenter Warwick Davis were so unimpressed with both their crappy boat and the Yangtze itself that they cut their river cruise short before they ever even reached the Three Gorges! I would say more fool (or Idiot) them, and that once on the boat you may as well tough it out until you at least see the gorges; I would say that, but to be honest, I don’t think I’d even get on one of the cruise boats in the first place!

Firstly, this is because I went through the gorges by hydrofoil, travelling from Chongqing to Yichang in one day rather than the three days it takes on a cruise boat, and my companions and I were happy we did it that way – the gorges were pretty spectacular, but not really enough to justify three days on a poisoned river in choking air just to see them. And secondly, with the completion of the enormous Three Gorges Dam (near Yichang) in 2012, they’re no longer as spectacular as they once were. When we passed through them the dam was still under construction and the waters had partially risen, but the gorges were still impressive – though they probably wouldn’t have been worth going miles out of our way for, or spending three nights on a shitty boat for, blasting through them by hydrofoil fitted nicely in with our route from Chengdu to Shanghai. With the water having risen so much now though, I’d say the gorges definitely wouldn’t be worth going miles out of your way or spending three days on a shitty boat for!

Hydrofoil Through the Three Gorges

Back when we did this the high speed rail network hadn’t yet reached Chongqing or Yichang (or the other big cities of Wuhan and Nanjing lying downriver towards Shanghai), the gorges weren’t yet flooded, and fast hydrofoil ferries still plied that section of the river to link up the riverside towns. We got up at the crack of dawn in Chongqing after this brilliant evening of fiery hotpot to take the hydrofoil to the Three Gorges Dam, from where a shuttle bus took us to Yichang (where we managed to catch the last bus of the day on to Wuhan). We were on the boat for about ten hours, and spent the time reading, watching the spectacularly grim man-made scenery from the hatches, chatting to some of the other passengers, and then finally passing through the Three Gorges. 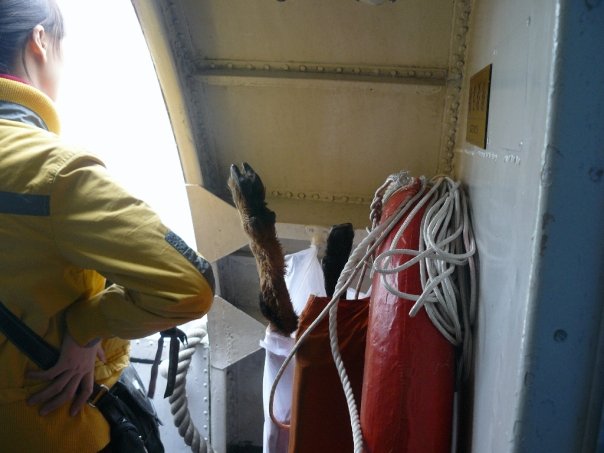 One of our fellow passengers had a goat carcass stuffed in their luggage, its legs sticking bizarrely straight up out the top of the bag, and I had an interesting chat with another guy who, upon learning I was English, told me he was a firm supporter of the Welsh in their ‘war of independence’ against England… not sure where he was getting this from, but I guess he was talking about Ireland and didn’t have a completely solid grasp on the facts. The gorges themselves provided an awesome ending to the boat trip, and it was cool to see the engineering marvel that is the dam, although we couldn’t see all of it due to the heavy smog. It was a fun day, we made it to our goal of Wuhan in the evening, and the next day (after a lot of messing around in Wuhan) continued on to Nanjing by bus, then finally a train to Shanghai. Having left Chongqing early doors on day one, we reached Shanghai around 4am on day three i.e. we got down the Yangtze from Chongqing to Shanghai in about 45 hours. With the transportation available at the time, that was some pretty good going and some very hard work!

While not really not intended for tourists at all, the hydrofoils provided a faster, cheaper alternative to the cruises, enabling you to get from Chongqing to Yichang in one day instead of three. Although the advent of high speed rail and modern highways had already massively reduced passenger traffic on the Yangtze, the river still served as the main transportation conduit along the Three Gorges section up until 2015; the riverside towns were served by the hydrofoil boats, and that was how the locals got upriver to Chongqing or downriver to Yichang – a useful option for tourists too. 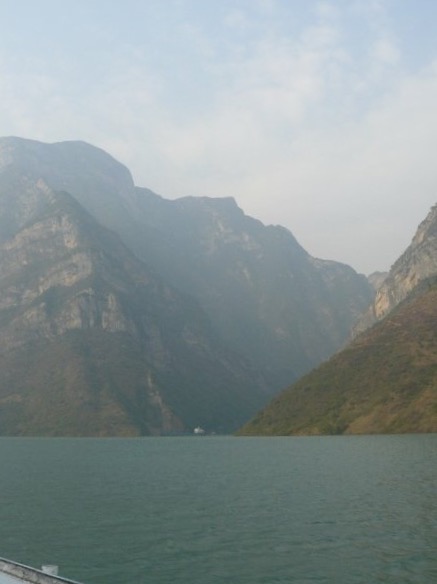 There was of course a trade-off when doing it by hydrofoil; doing a tourist cruise, you pass through the gorges nice and slowly on a boat with proper decks, and have time to take them in. Speeding through the gorges by hydrofoil though, we did wish the boat would slow down a touch, and it would’ve been good to have a deck to stroll around – instead, we were snapping photos out of the hatches at the side of the boat and we passed through each gorge in just ten minutes or so. It definitely felt a bit don’t-blink-or-you’ll-miss-it, and we’d only opted for the hydrofoil because we were on such a tight schedule during that first frantic run through China, with my companions Ross & Mike needing to be in Shanghai for their flight home just a couple of days later; yet, we ended up being glad we did it that way. Although the gorges themselves were a little snatched, we were happy we’d not spent three days on a dirty boat on that ruined river just to see them. The hydrofoil sufficed, saved a lot of time, got us closer to our goal via some spectacular scenery (and some grim), and with it being so fast it was nice to stand at the hatches with the wind blasting through your hair. If I were to visit the Three Gorges again, I would want to do it by hydrofoil again.

However, with the completion of the new road serving the riverside towns in 2015, the hydrofoil was completely discontinued and no longer operates. The only option now is to take a Three Gorges cruise, and I personally really don’t think I would bother; I reckon the time would be better used to visit Zhangjiajie (not too far from Yichang i.e. only 5 hours(!) by (non-bullet) train), the spectacular area used as a backdrop for the movie Avatar. 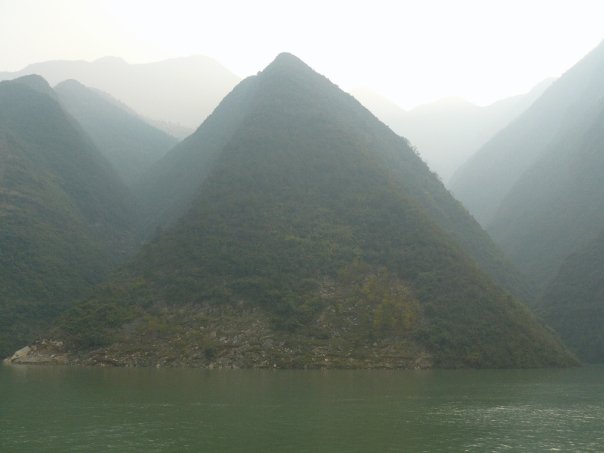 How to visit the Three Gorges

Since 2015, the only option for going through the gorges is on a river cruise; if you do still want to do a Three Gorges cruise (even after listening to Karl Pilkington!), the best route is surely the shortest i.e. the 3-day (I’ve also read reports of 2-day cruises being sometimes available) cruise from Fengjie to Yichang (I wouldn’t fancy one of the long-distance cruises from Nanjing or Shanghai at all)

Be warned that there are plenty of horror stories out there about the boats, relating to the state of the toilets, the presence of non-human passengers (of the rodent and insect varieties), and so on; you get what you pay for, and if you want a nice(r) boat, you should probably stump up the extra for one of the luxury options. Also be aware that a boat tragically sank in 2015 and took 442 souls with it (it was doing a long-distance cruise from Nanjing and hadn’t yet reached the Three Gorges, but was the same kind of boat that does the shorter 3-day Gorges cruises between Fengjie and Yichang)

Fengjie is a 5-hour bus ride from Chongqing or a 3-hour bus ride from Wanzhou (Wanzhou can be reached by bullet train direct from Chengdu (3.5 hours) or Chongqing (90 minutes); at the other end, from Yichang the (approximate) bullet train times are 2.5 hours to Wuhan, 6 hours to Nanjing, 7.5 hours to Hangzhou, and 8 hours to Shanghai. These are all bullet trains, but there is also one daily conventional train running overnight on this new high speed line, leaving Yichang at 19:36 and taking 14 hours to Shanghai. (Departure time correct at time of writing, but of course may be subject to change; check chinatrainguide for train schedules, and you can search and book tickets on 12go Asia*)

These days to travel from Chongqing to Shanghai would be much less hard work than when we did it, so long as you’re okay with doing the river cruise. As you can now take a bullet train directly from Yichang to Shanghai in just eight hours, you could go from Chengdu or Chongqing to Fengjie on day one, do the cruise from there to Yichang, and from Yichang reach Shanghai the same evening or following afternoon.

As for the hydrofoils, just to reiterate in case you’ve skim-read and missed it; as of 2015, the hydrofoils no longer operate on the Yangtze. If you want to go through the Three Gorges, you have to join a cruise from Fengjie to Yichang (or vice versa). Do your research on the cruises so you know what to expect, and be aware that the Yangtze is in a pretty sorry state so it may not be worth three days of your trip just to see the gorges. To sign off, I’ll quote Palin again; “The man-made scenery of the Yangtze is spectacularly grim; ancient power stations belch fumes, a permanent smell of sulphur hangs in the air.”

And here’s Karl Pilkington’s miserable take on it again!