You’re woken up by the sound of an old man violently expectorating in the hutong alleyway outside, cringing during the pause while he holds his mouthful of phlegm for a second or two between noisily bringing it up and noisily depositing it on the floor with typically exaggerated sound effects. Then (after the usual faffing around waiting to get your 100 yuan key deposit back upon check out) there comes a sardine-tin subway ride, the hordes pushing & shoving their way into the carriages before those inside have been able to get off, a veritable rugby scrum of inconsideration; those alighting scowl and mutter their anger towards the phalanx of morons pushing their way on at each station, yet they did the same when they boarded.

Subway ride dealt with, next up comes the joy of clearing the airport-style security at the railway station. Tickets & IDs must be shown to the guards at the entrance, and all bags must go through the scanners; the line is long, and it’s full of people hellbent on pushing their way through in front of whoever they can get in front of. No matter that it makes no difference whatsoever and the train doesn’t leave any earlier if you get into the station a few minutes faster; everybody still wants to get in there a few minutes faster.

Finally, you attain the air conditioned sanctuary of the departures area, a vast aircraft hangar-like space with seats and elbow room and coffee and noodles. Riding China’s bullet train system isn’t exactly the most user-friendly experience, but they definitely did a good job with the engineering side of things; the trains are sleek, fast, and comfortable, and the gargantuan stations are something else.

Then comes boarding time, and your gate’s escalators are opened for everyone to descend to the platform; another ridiculous crush takes shape as a mass of people hurry to get through first, for no reason whatsoever. Simmer down, you think; the departure time is fixed, we all have a seat, and our seats are pre-determined. No reason to rush.

Well, no reason that is, unless you’re one of the hopeless nicotine addicts who simply must power through one last cigarette before being locked inside a no-smoking train for an hour or two until the next station.

There are many such individuals ignoring the no smoking signs (and the pleas of the staff), so you descend the escalator into a fug of cigarette smoke mixing with the PM2.5; the pollution’s so thick you can see it in the air, with even just the far ends of the platforms looking hazy. The cigarettes stink, but they probably don’t make much difference given the filth you’re already breathing; should’ve kept your mask handy but it’s crammed down in your bag somewhere. At every station the train stops at along the way, all these smokers will gather by the doors as the train pulls in, cigarettes already in mouths, lighters already in hands, to leap out and furiously inhale as much tar as they can in 30 seconds before the train attendants yell at them to get back onboard; the platform is strewn with half-smoked cigarettes and they all pile back in. So much for the stations being no smoking areas! At least the no smoking on board is strictly enforced – lengthy announcements clearly explain that it could cause a fire, and that on a train travelling at 300kph this would be disastrous.

Finally boarding the train, it’s an absolute gong show waiting for everyone to settle down. The smokers huddle at the doors, flinging their cigarette butts to the ground at the last possible moment before crushing in, while bags are still being arranged and re-arranged, shoved up on the luggage rack, taken back down to get something out, shoved back up, people competing for the ‘best’ spots on the racks; you shove your bag wherever you can and take your seat, marvelling at just how much commotion it takes for everyone to get on and sit down.

Settle down they eventually all do, though not until well after the doors have closed and the train is already pulling out through the suburbs; anyway, now you can finally relax and enjoy the scenery through the window. 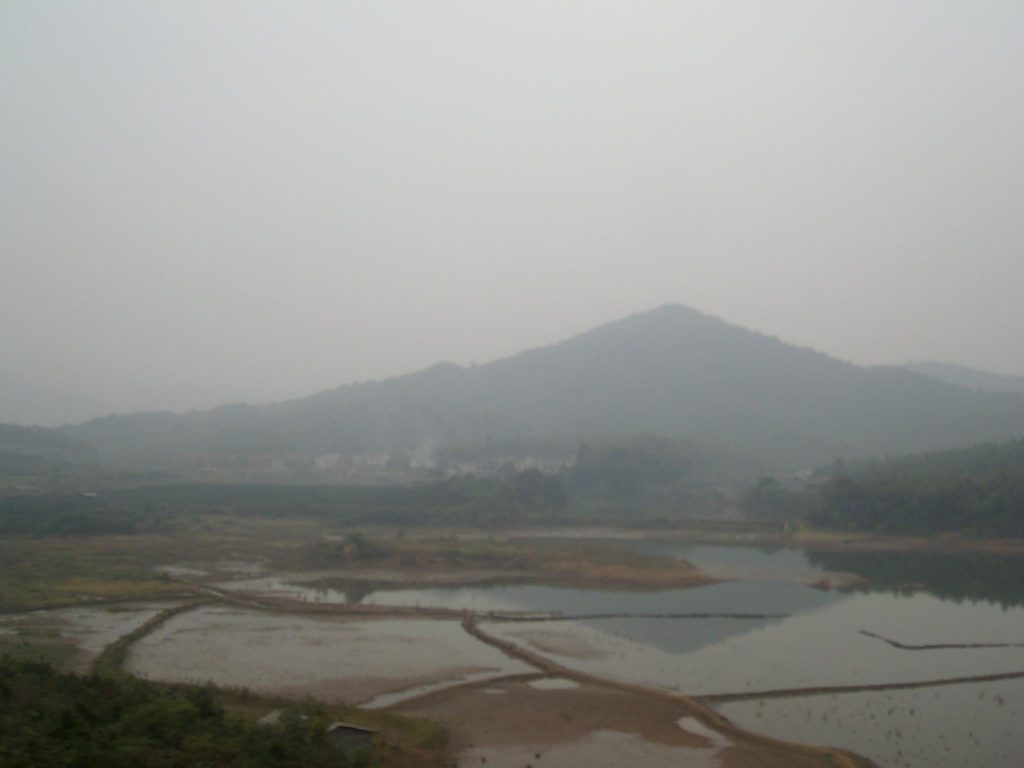 But today the scenery is grim, a spectral, smog-choked land rushing by the window under a smothering blanket of airborne foulness. The views are great sometimes to be fair, but not today… this is just one of those days, one of those days when it feels like China is chewing you up and spitting you out – spitting you out with an exaggerated sound effect like a mouthful of phlegm.