If you google ‘Huashan hiking’ or some such, you’ll find pages and pages of posts and articles about it being ‘the most dangerous mountain in the world’, all with those awesome pictures of people edging along a narrow plank of wood attached to a cliff face above a precipitous drop.

So is Huashan the most dangerous mountain in the world?

In three words, is it bollocks.

In a paragraph; if you want to write an article or blog post about climbing the most dangerous mountain in the world, may I suggest K2? Good luck not dying there if you’re not an experienced mountaineer with sound judgement and professional equipment! Even if you are you’ll still require a certain amount of luck; whereas none of the above is required to climb Huashan. You need zero experience or mountain knowledge (though you will want at least moderate fitness if you don’t take the cable car), and you can do it in trainers with a hangover (hangover not recommended).

The hike is hard work, to be sure, and steep, but the trails are well-prepared and maintained; you’re not going to fall off or freeze to death or develop a cerebral edema from acute altitude sickness. So what’s all this about it being so dangerous? Well, it’s basically just a neat little bit of marketing, or a good clickbait title; the ‘dangerous’ bit is the skywalk, the bit where you can walk on those wooden planks. But this isn’t part of the hiking trail, rather it’s a paid adventure activity you can do near the summit of Huashan. It doesn’t go anywhere, and punters just walk out along it and then walk back. It definitely looks awesome and is a cracking photo opportunity, but it still isn’t dangerous! Wearing a harness and being clipped to a cable takes care of that. My friend and I were keen to do it before we got up there, but when we realised it was basically a gimmick we figured the money would be better spent on noodles and coffee.

Anyway, enough about it not being dangerous. What it is, is an awesome hike up a beautiful mountain with some dramatic scenery; in fact, I’d probably say climbing Huashan (Splendid Mountain, 花山, or 華山 in traditional characters) is one of the best things I’ve done in all my visits to China. This was on my first visit to mainland China in 2007 with my good friends Mike and Ross; we’d arrived in Beijing at the end of our Trans-Siberian (technically, Trans-Mongolian) train trip, and after a few days there – very hectic days (and nights) to say the least – we took a sleeper train to Xi’an to see the famous Terracotta Warriors.

If you’re planning a trip to China, chances are you’ll be planning or considering a visit to Xi’an. As well as the Terracotta Army, it also boasts the best preserved city wall in China, a Muslim quarter with fantastic street food, and various traditional pagodas and towers, making a stay of a few days an important part of many Chinese itineraries – especially for those interested in Chinese history and ancient culture. Well, if you like mountains and amazing scenery you should add climbing Huashan to your list of reasons to visit Xi’an, and if necessary find an extra day in your schedule to do it. 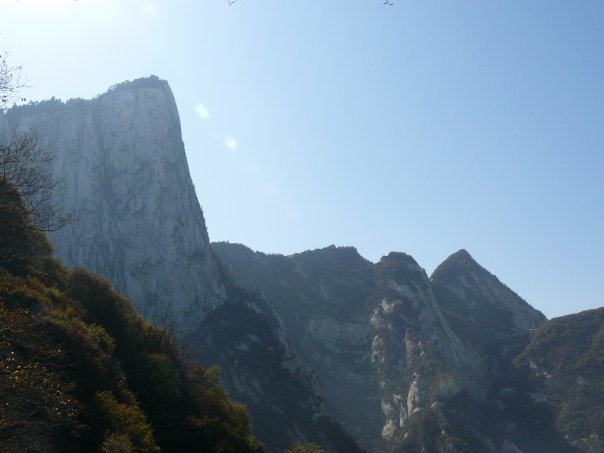 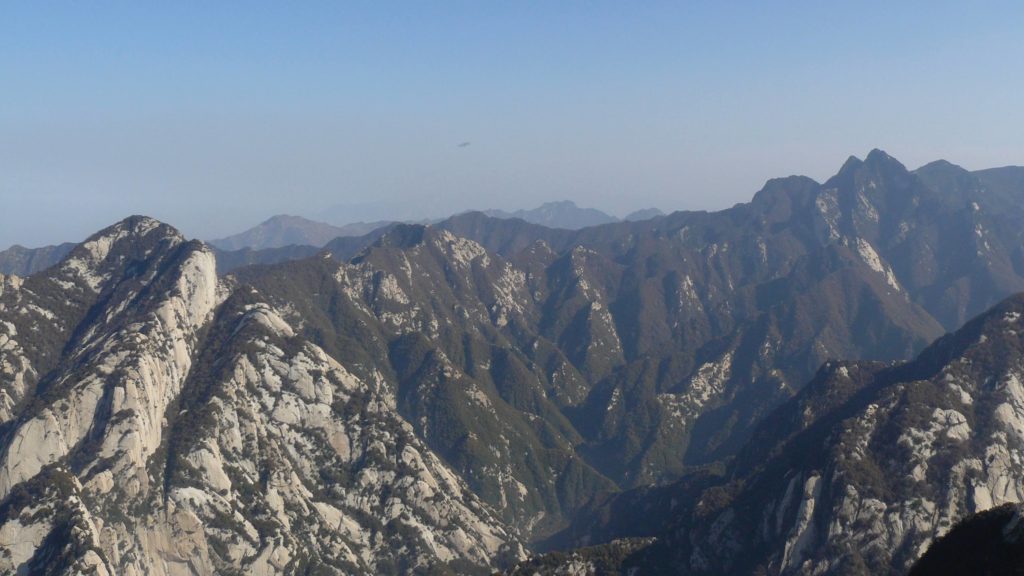 Huashan is one of China’s Five Great Mountains along with Tai Shan, (泰山, Tranquil Mountain), Heng Shan (衡山, Balancing Mountain), another Heng Shan (恒山, Permanent Mountain), and Song Shan (嵩山, Lofty Mountain), and although it isn’t the highest of them (Heng Shan, 恒山, is the highest at 2,017m) it is renowned for its dramatic scenery. It really is a beautiful mountain of towering cliffs, vertical drops that you can stand on the edge of and look straight down hundreds of metres, with the main Huashan trail featuring crazy paths and steps cut up extremely steep slopes between cliff faces and under giant boulders. It also has some really nice evocative names for its major geographical features, such as Black Dragon Ridge, Golden Lock Pass, Thousand-Foot Precipice, Hundred-Foot Crevice, Immortal’s Palm Peak, Jade Maiden Summit, and so on. Gotta love those names!

The Huashan trail we did starts from Yuquan Yuan (玉泉院, Jade Spring Temple) in Huayin city, 75km from Xi’an on the Yellow River plain. This path takes you from the temple up to the North Peak at 1,614m, and it’s a cracking path cut into the mountainside, at one point (the “Thousand-Foot Precipice”) taking you up a 70 degree slope in the narrow space between two cliff faces (there are fixed iron chains you can use on both sides). You won’t encounter so many people on this trail, just a few fellow climbers, some drinks vendors alongside the path, and the wiry old porters carrying supplies up to the hotels and restaurants at the top, their loads balanced across their shoulders on lengths of bamboo – perhaps while playing a tune on their flute. Those chaps are seriously hardcore. The lack of crowds all changes after North Peak though, as there’s a cable car disgorging hundreds of visitors at its upper station near the peak; from here on you’re battling the crowds on narrow paths, so expect the going to be slow. Beyond North Peak is Black Dragon Ridge, which takes you to the summit area on a high plateau surrounded by five peaks – North (Cloud Terrace) Peak, South (Wild Goose Landing) Peak, East (Facing the Sun) Peak, West (Lotus Flower) Peak, and Central (Jade Maiden) Peak – gotta love those names!

The highest point is South Peak at 2,154.90m (according to the very precise summit stone). That’s quite a big vertical climb from Yuquan temple, so you do need a good long day of hiking if you’re intending to hike both up and down. That was our initial plan, but we ran out of time due to a) the bus from Xi’an taking over two hours in the morning, b) between North Peak to South Peak we got a bit lost as there’s a plethora of trails up there connecting the five peaks, and c) there were lots of middle-aged Chinese businessmen (not-so-appropriately dressed in suits and business shoes) crowding the paths after North Peak, with long waits at a few bottlenecks. So, in the end, we had to take the cable car down in order to be sure we didn’t miss the last bus back (at 7pm, if I remember correctly).

These days the transportation cut-off isn’t such an issue thanks to the new bullet train line connecting Xi’an with the city of Zhengzhou (郑州) to the east, which has a stop called Huashan North (花山北, Huashanbei) which is a taxi ride from Yuquan temple. Using the bullet train instead of the bus means you can start your climb at least 90 minutes earlier in the morning, and you don’t need to worry about the last bus back as the last train to Xi’an is at 21.36 (at time of writing – make sure to check the timetable on Chinatrainguide). 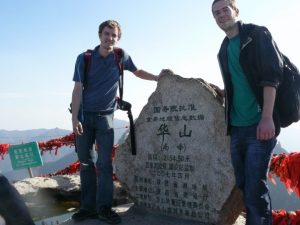 Going down on the cable car, we observed that there was another path up the mountain directly under the cable car line. Apparently it’s known as Soldier’s Path due to an episode in the Chinese civil war in which a small squad of Communist soldiers used that route to sneak up the mountain, climbing Huashan to ambush the Kuomintang forces who were holding it. However this path basically just looked like a steep flight of stairs all the way up but without the crazy cliff-hewn steps, so it didn’t look like nearly so interesting a climb – I definitely recommend the path from Yuquan temple. 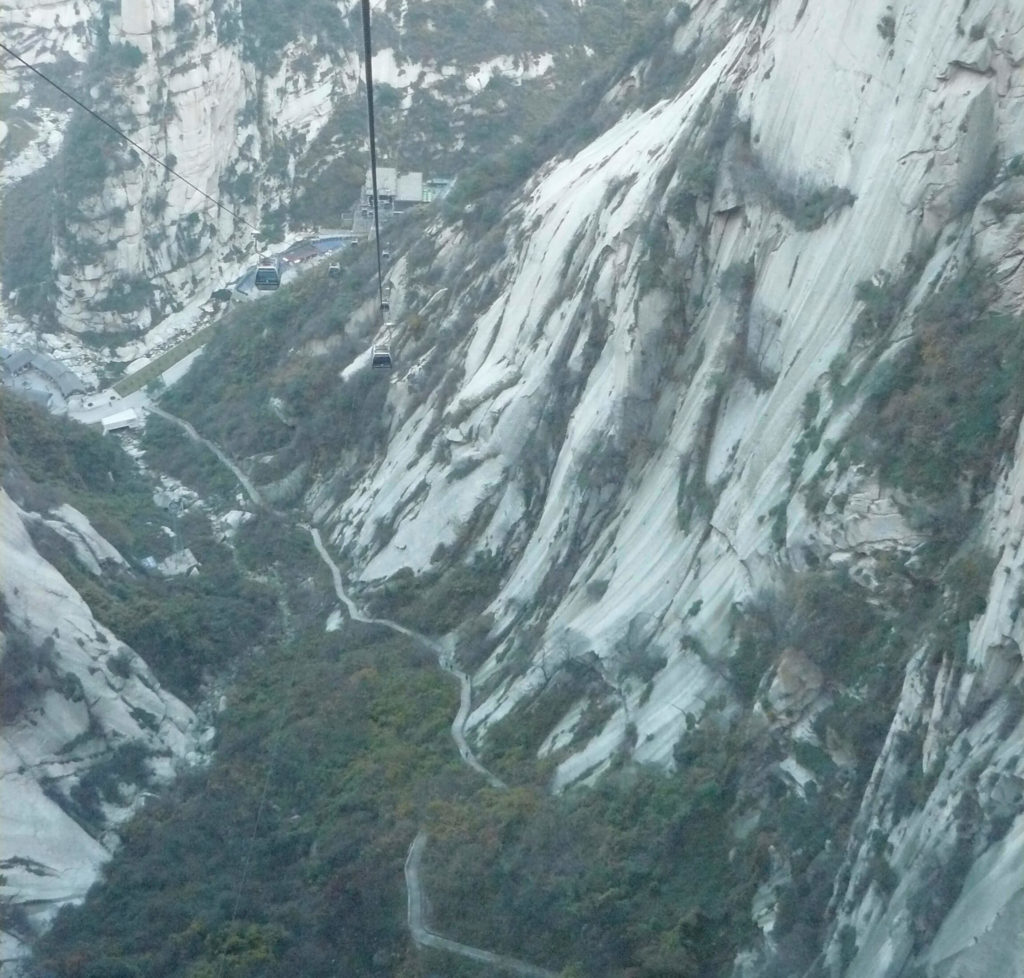 You could perhaps ascend from Yuquan temple and then descend Soldier’s Path for a change of scenery. There’s also a new cable car which takes visitors up to the west peak, making both the west and north peaks directly accessible by cable car; if you don’t have the time to climb the Huashan trail (or just don’t fancy it), the cable cars mean that you can still easily enjoy this mountain and its fantastic scenery and perhaps just do some of the walking trails in the summit area (which aren’t nearly so steep as the paths up from the base). However you do it, climbing Huashan is awesome, the best hike I’ve done in China and one of my favourite things I’ve done in China.

Have you climbed Huashan? How was it? Any questions? Leave a comment below and I’ll get back to you.

Also, make sure you have a good insurance policy. World Nomads offer flexible travel insurance you can buy even if already overseas – most travel insurance companies won’t cover you if you’ve already left your country, and this can be a crucial point as I once found out the hard way in Thailand.

Some of these are affiliate links i.e. if you use them to purchase insurance, VPN service, or accommodation, 4corners7seas will receive a commission from them – this commission comes out of their profit margin at no extra cost to you. I’m recommending them because I know and trust them from personal use; thank you in advance should you choose to use my links.